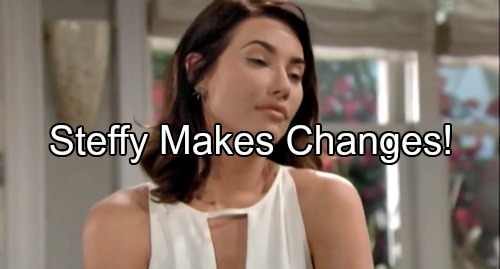 The Bold and the Beautiful (B&B) spoilers for Tuesday, June 28, tease that Brooke (Katherine Kelly Lang) will feel horrible about what she’s done to Katie (Heather Tom). Bill (Don Diamont) managed to convince Katie that everything was fine between them, but Brooke knew ending the affair was for the best.

Katie’s suspicions alone are enough to send her over the edge.

Ridge (Thorsten Kaye) will let Brooke lean on him for support. Brooke’s betrayal will leave her distraught and defeated. It seems she just can’t keep from heading down this road over and over again. Brooke always thinks she can fight her desires, but it never really pans out.

Ridge will contend that Brooke simply made a mistake. He’ll suggest that he’s made a few of those, too. They can’t change the past, but they can change the future. Brooke will think that sounds like the right idea. She’ll note that she used to be a strong woman.

Brooke won’t be sure why she lost sight of that, but she’d like to return to that place of strength.

Brooke won’t want to be defined by her need for a man. She’ll hope to break out of that pattern. Unfortunately, that’s probably not going to happen. B&B buzz hints that Brooke may wind up back in Ridge’s arms before long.

If Brooke feels like Bill isn’t an option, Ridge is the next best thing.

Other Bold and the Beautiful spoilers reveal that Wyatt (Darin Brooks) will face more family drama. He’ll be frustrated over the way he constantly has to prove his worth. Wyatt tries to live up to the Spencer name, but it’s never enough.

Of course, Bill has actually been in Wyatt’s corner lately. Liam (Scott Clifton) is the one who’s getting shot down these days. However, Wyatt might think that’s part of the problem. He’s naturally being compared to Liam right now.

Wyatt may not like having to fill his brother’s shoes. He wants the chance to be his own man.

Steffy (Jacqueline MacInnes Wood) will have to tackle a project in Tuesday’s episode. The Bold and the Beautiful spoilers say Steffy will receive some social media training. She’ll need a quick lesson on how to promote herself online.

It turns out this could be good news for Steffy’s personal life.

Once Steffy gets her speedy tutorial, she’ll realize that it’s time to make strategy shifts. She’ll make some changes that will affect several areas of her life. For starters, Steffy is about to lay down the law when it comes to Quinn (Rena Sofer).

Stick with the CBS soap for updates on Steffy’s orders and Quinn’s reaction.

So B&B fans, what do you think about Brooke’s new outlook on men? Will her efforts to be more independent fail miserably? Will Wyatt overcome his Spencer struggles? Will Steffy’s upcoming moves create outrage?