The Bold and the Beautiful Spoilers: Steffy Pregnant with Liam’s Baby – Reunites with Wyatt Before Shocking Revelation 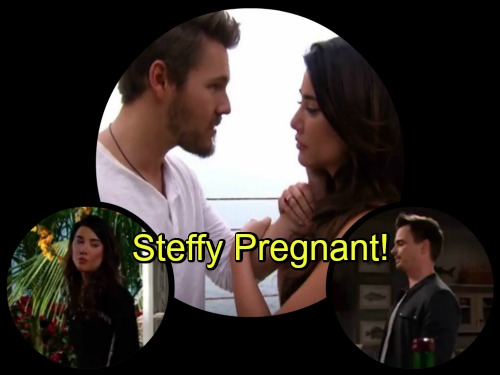 The Bold and the Beautiful (B&B) spoilers tease that Steffy’s (Jacqueline MacInnes Wood) romantic roller coaster will continue. She recently broke up with Wyatt (Darin Brooks) and now she’s decided that she wants Liam (Scott Clifton) back. However, it looks like Steffy is acting a bit impulsively.

Thanks to Quinn (Rena Softer), Steffy has been an emotional wreck for months. She just couldn’t deal with Quinn anymore. Steffy eventually had to check out of the situation. Unfortunately, leaving Wyatt won’t solve Steffy’s problem. Quinn has Eric’s (John McCook) power of attorney and it makes her more connected to the Forresters than ever.

At first, Steffy may feel great about her decision. She’ll likely be at peace and willing to move full-speed ahead with Liam. That’s when the guilt will probably hit. Steffy will believe she needs to do the right thing and reconcile with her husband. Things could get tricky for Steffy once that happens.

After Liam has had a taste of the life he’s been longing for, he won’t want to let it go. The Bold and the Beautiful spoilers say Liam will sing his same old song. He’ll insist that Steffy belongs with him.

Of course, Steffy may find it a little harder to resist this time. The chance for a life with Liam is dangling right in front her. It could be tough for Steffy to walk away. At some point in the midst of all this, Steffy and Liam might make love.

We have to remember that they’ve been pining for each other for what seems like forever. Liam will be especially anxious to rekindle their spark. Steffy might cave in and immediately regret it. She could suggest that it was a mistake and they should never speak of it. Steffy might be terrified of hurting Wyatt any more than she already has.

Steffy could settle back into the groove of putting up with Quinn and being married to Wyatt. The good news is that Wyatt will be by Quinn’s side as she runs Forrester Creations. B&B spoilers reveal that Eric will allow them both to be in charge. This could ease at least some of Steffy’s concerns.

Wyatt can’t always control his mother, but he does a better job than most people. Quinn respects Wyatt’s opinion and she’ll want to help him keep his relationship alive. Eric’s arrangement might work out well and Steffy could reconnect with Wyatt.

Let’s say they get back on track quickly and renew their love for each other in the bedroom. Guilt could once again be a motivating factor for Steffy. Suddenly, we could have a paternity mystery. It’s about time for The Bold and the Beautiful to do a “Who’s the daddy?”

On the other hand, maybe there won’t be any lovemaking with Wyatt at all. In that case, Steffy would know that the baby was Liam’s and she might try to keep the secret. When the truth comes out, it could be quite dangerous to have Wyatt in a position of power.

The switch could flip and Quinn might be the one struggling to control Wyatt for the sake of her own marriage. It would also be a way to finally end the love triangle and put Steffy with Liam. We’ll give you updates as other info emerges on this possibility. Stay tuned to B&B and don’t forget to check CDL often for the latest Bold and the Beautiful spoilers, updates and news.