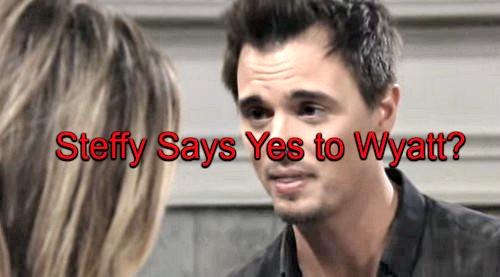 “The Bold and The Beautiful” (B&B) spoilers indicate that Wyatt Spencer (Darin Brooks) will press Steffy Forrester (Jacqueline MacInnes Wood) for an answer to his proposal in coming days and she will say yes despite nagging concerns about Liam Spencer (Scott Clifton).

Looks like Steffy will take off that big diamond Liam put on her finger and replace it with the giant ruby that Wyatt offered. Looks like it’s now wedding planning time for the Forrester and Spencer clans. Seems like Steffy should know by now how to get hitched…

Quinn Fuller (Rena Sofer) may surprise both Steffy and Wyatt by her hands-off approach to their big day. That’s because Quinn will likely still be juggling her kidnapped faux husband “Adam” aka Liam. No way can Quinn do much in the way of wedding planning while keeping him under wraps.

We do have to wonder if Steffy will go with a traditional wedding dress this time or something more like black leather with the bride and groom riding off into the sunset on their motorcycles. Wyatt is pretty much a wild child – as is Steffy – so we can probably expect the unexpected.

Perhaps they’ll go for a beach wedding since they fell in love at the beach… B&B spoilers also reveal that Chaz Bono is guesting at the end of March as a minister, so it seems that’s a likely window for the Steffy-Wyatt wedding plans to come to fruition.

We also have to wonder how Quinn will sneak out on her secret kidnapped “husband” to make it to the wedding of her only son… It would be too suspicious for Quinn not to show up, but that’s an awfully long time to be away from her cabin and Liam.

With Deacon Sharpe (Sean Kanan) now lending a hand, perhaps Quinn can pull this all off and keep Liam in the dark and out of the way until Wyatt and Steffy get hitched. Quinn knows this will all come crashing down at some point, but is deluding herself on how long it will last.

What do you think B&B fans? Will Steffy and Wyatt make it to “I do”? What do you expect for their wedding? Will it be outrageous and offbeat or traditional? Share your comments below and come back to CDL often for more “The Bold and The Beautiful” spoilers and news.