‘The Bold and the Beautiful’ Spoilers: Steffy Shatters Liam’s Hopes for the Future – Brooke Whines About Marriage Hypocrisy

BY Heather Hughes on June 22, 2016 | Comments: one comment
Related : Soap Opera, Spoiler, Television, The Bold and the Beautiful 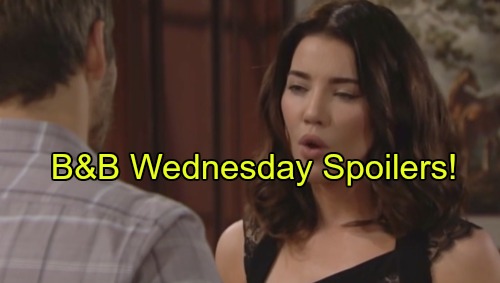 The Bold and the Beautiful (B&B) spoilers for Wednesday, June 22, tease that Liam (Scott Clifton) and Steffy (Jacqueline MacInnes Wood) will consider their love story. There’s no doubt that they’ve shared some good times. They’ve even shared some bad ones, but they managed to overcome those obstacles.

Unfortunately, Liam is trying to push past one problem that Steffy isn’t willing to tackle.

Liam will urge Steffy to remember her feelings for him and think about the life they could have together. Steffy will admit that she still cares about Liam, but she can’t just bail on Wyatt (Darin Brooks). Liam will argue that their marriage doesn’t truly matter.

They only tied the knot because Quinn (Rena Sofer) meddled.

Steffy will confess that she got caught up in something with Wyatt. He provided support when she needed him. Of course, Quinn’s interference definitely played a role in why they got hitched. Nevertheless, Steffy won’t think that means what she feels for Wyatt isn’t real.

Liam’s hopes for the future will likely be shattered. This is sure to be a tough blow.

Meanwhile, The Bold and the Beautiful spoilers say Wyatt will talk to Katie (Heather Tom) about marriage. When Liam’s name comes up, Wyatt will claim he’s not worried about losing his wife. Katie will think her own relationship is on solid ground as well.

Wyatt and Katie are living in a dream world if they can’t see the threats they’re facing. Even if Liam stops pursuing Steffy, there’s still a chance she’ll go after him instead. After all, Steffy usually decides she wants a man once he loses interest.

As for Katie, she’s ignoring the red flags. Her marriage is crumbling while she overlooks plenty of warning signs. Brooke will share a private conversation with Bill about their affair. She’ll imply that Bill is being a hypocrite. How can Bill demand that Liam respect Wyatt’s marriage when he’s not willing to respect his own?

Brooke will suggest that what they’re doing isn’t honorable.

Bill will understand why Brooke has concerns, but he’ll feel like their attraction is too strong. They can’t resist each other. That fact is already starting to get these two in trouble. Bill and Brooke will have another close call when Rick (Jacob Young) tries to crash their latest love session.

Brooke will manage to shoo Rick, but this probably won’t be the last time they get interrupted. Other dangerous encounters should be on the way. B&B viewers will be anxious to see how Bill and Brooke will finally get caught. Stick with The Bold and the Beautiful for updates on all of the marriage mayhem.

So B&B fans, what do you think about the news that Steffy will turn Liam away once again? Will Steffy have a change of heart when Liam backs off? Will Bill convince Brooke to give up some of her guilt? Voice your opinion in the comments below and don’t forget to check CDL often for the latest Bold and the Beautiful spoilers, updates and news.