BY Monica DelRay on April 15, 2016 | Comments: one comment
Related : Soap Opera, Spoiler, Television, The Bold and the Beautiful 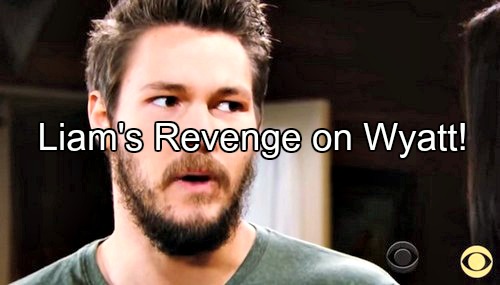 “The Bold and The Beautiful” (B&B) spoilers tease that Liam Spencer (Scott Clifton) will discover that his brother married Steffy Forrester (Jacqueline MacInnes Wood) in the most awkward and heartbreaking of ways – when he proposes to Steffy.

Everyone knows that Liam still thinks he’s engaged to Steffy but they are keeping it quiet for now. It’s Steffy herself that insisted that Wyatt Spencer (Darin Brooks) hold off on telling his brother the truth. Steffy doesn’t think Liam can take the shock.

That’s a good idea – in theory – but B&B spoilers say Liam will be so much more shocked when he gets down on one knee to renew his pledge to marry Steffy only to find out she’s already married – and to his brother to boot. But that’s not the end of the bad news for Liam.

Next he’ll find out that Wyatt has not only taken his woman but moved in on his job with their father Bill Spencer (Don Diamont). Liam feels like he has nothing left and will likely believe that Quinn Fuller (Rena Sofer) and Wyatt have together taken everything from him.

The Bold and the Beautiful spoilers ask if Liam might even think that Wyatt was conspiring with Quinn? If and when Liam finds out that Wyatt saw the video of Quinn taking him away but didn’t report it to anyone, he could assume the worst … B&B spoilers tease that Liam will soon be back at Forrester Creations.

If Liam runs into Charlie Webber (Dick Christie), no doubt the fashion cop might bring up the footage in the context of saying he’s glad Liam is okay after what he saw on the security tape. That could lead to Charlie mentioning that Wyatt also saw the footage.

B&B spoilers reveal that Liam will vow to take back everything Wyatt has that should be his – and we may soon see a Spencer civil war. Who will Bill side with? Could Bill also believe that Wyatt was complicit in Quinn’s scheme?

Seems like Bill should give Wyatt the benefit of the doubt and that could further antagonize Liam. Wyatt, for his part, will fight hard to hang onto Steffy and his new job at Spencer. Wyatt finally has everything he wants – his dad’s favor and a wife he loves.

No way will Wyatt back down even though Liam obviously thinks that’s what he should do. Wyatt thinks that Liam screwed up his relationship with Steffy and they legitimately fell in love. Wyatt feels like he’s in the clear morally even though Liam sees his brother as the bad guy.

How bad will this get and will Steffy stick with Wyatt or give in to Liam? Is it possible that usually chill Liam could turn sinister in his quest for revenge? Will all this drama allow us to see a side of Liam we’ve never known before?

What do you think B&B fans? Do you think Wyatt should give Liam back his life? Do you think Liam will succeed in stealing back Steffy and his job at Spencer? Share your comments and come back to CDL often for “The Bold and The Beautiful” spoilers and news.