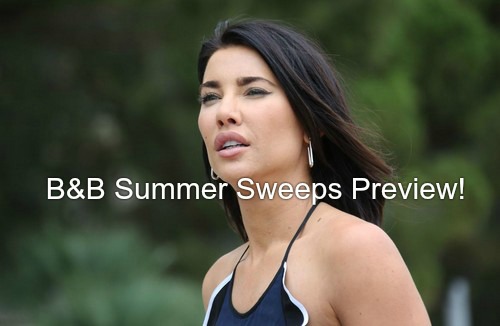 The Bold and the Beautiful (B&B) spoilers tease that we’re in for some sizzling summer sweeps this year. First, we have to talk about Bill (Don Diamont), Brooke (Katherine Kelly Lang) and Katie’s (Heather Tom) explosive love triangle.

Now that the truth is out, Katie is going to fall off the wagon big time. Keep the booze coming!

Bill will grow concerned about his Will’s (Zane Achor) well-being and he’ll try to take the kiddo away. Naturally, Katie won’t be pleased. She’ll view this as a double betrayal. The Bold and the Beautiful spoilers indicate that Katie could soon be planning the ultimate revenge.

Bill and Brooke will have to watch their backs!

If Katie and Bill take steps toward divorce, Bill and Brooke will no longer have to conceal their love. They’ll be free to indulge in much more than kisses. Will they take advantage of the second chance they’ve been given? Bill made it clear that he wants Brooke, but more obstacles could emerge…

Ridge’s confession will kick off another corporate storyline. B&B is apparently fond of those. Rick, Steffy (Jacqueline MacInnes Wood) and Thomas will all be very interested in taking over Ridge’s job. What will happen if Ridge gets dethroned? That may be the least of his problems!

The Bold and the Beautiful spoilers suggest that Caroline (Linsey Godfrey) and Ridge’s marriage could be in trouble. You can expect some major tension for this couple. Wyatt (Darin Brooks) and Liam (Scott Clifton) will also have a strained relationship this summer.

These brothers are in love with the same woman and that’s going to be a real issue.

Steffy will feel caught between her head and her heart. She doesn’t want to bail on Wyatt and she obviously cares about him. However, it should be tough for Steffy to ignore the butterflies she feels when she looks in Liam’s eyes. Let’s face it: Liam and Steffy are destined to get back together eventually.

It seems Bill may make an effort to stop playing favorites over the next few weeks. He’ll invite both of his sons on a business trip to Monte Carlo. Of course, Steffy will be coming as well. This sounds like a recipe for disaster. That’s especially true since Quinn (Rena Sofer) will pop up during the getaway.

Eric (John McCook) will be around during all of this, too. Does that mean Quinn and Eric’s romance could be exposed? If so, there’s no better place to do it than Monte Carlo! Los Angeles is nice, but it’s fun when the show shakes things up with location shoots.

Some fantastic plots are in the works. B&B will undoubtedly throw in several surprises along the way. We’ll give you updates if more news emerges. Stay tuned for summer sweeps and don’t forget to check CDL often for the latest Bold and the Beautiful spoilers, updates and news.