‘The Bold and the Beautiful’ Spoilers: Thomas and Sasha Hit It Off – Ridge Pushes Katie to Bring Bill Down 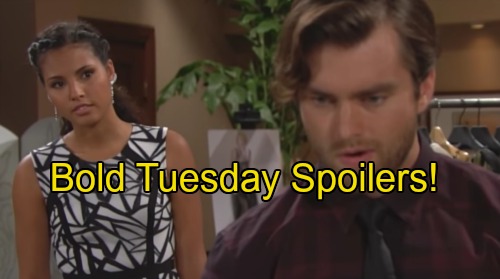 The Bold and the Beautiful (B&B) spoilers for Tuesday, August 9, tease that Bill (Don Diamont) and Katie (Heather Tom) will discuss their impending divorce. Bill will insist that they need to get along for Will’s (Zane Achor) sake. He’ll suggest they should just try to part ways peacefully and move on with their lives.

Later, Katie will have a conversation with Ridge (Thorsten Kaye). When Ridge hears what Bill is proposing, he won’t think Katie is getting a good deal. Ridge will believe Katie deserves more. In fact, he’ll have a plan that will make sure Katie is set for life.

Katie won’t know if she should push Bill. She’ll point out that Bill threatened to take her to court and have her declared incompetent. Katie won’t want to hand over full custody of their child. The Bold and the Beautiful spoilers say Ridge will assure Katie that he won’t let that happen. He’ll think they can stand up to Bill without causing too much trouble.

Of course, Ridge has another motive for taking on Bill. B&B fans know that Eric (John McCook) and Quinn’s (Rena Sofer) relationship has thrown the Forresters for a loop. Ridge is becoming concerned about the threat to the family business. He’ll think he needs to regain at least a little control.

Ridge will ask Katie to go after Bill’s shares in Forrester Creations. While Katie listens to Ridge’s proposition, Thomas (Pierson Fode) will have a chat with Sasha (Felisha Cooper). These two will find themselves connecting as they open up about their fathers.

The Bold and the Beautiful spoilers say Sasha will gripe about Julius (Obba Babatunde) and how he never treats her like a true Avant. Sasha is basically facing a lifelong punishment for being born. Thomas will understand where Sasha is coming from. He also feels like he’s been disrespected by Ridge, especially over the last year or so.

Thomas will mention Caroline (Linsey Godfrey) and all of the emotions their family has dealt with. Sasha will suspect that Thomas still has feelings for Caroline. She’ll believe that’s normal. Thomas is the father of Caroline’s child and they’re always going to be connected.

Both of these B&B characters will appreciate having someone to talk to. Sasha might even start to develop a crush. If nothing else, Sasha could see an opportunity to worm her way into the Forrester clan. She isn’t having much luck with Zende (Rome Flynn). Thomas might be Sasha’s last hope for a ticket in.

However, Thomas is in love with Caroline and that could present a problem. Will Sasha try to seduce Thomas pretty soon? Thomas will probably do his best to keep things platonic, but he may find it difficult to resist Sasha’s advances. She can be quite persuasive when it comes to sex.

Regardless, their relationship could become complicated in the near future. Someone is bound to get hurt in the midst of all this. We’ll give you updates as more news comes in. Stay tuned and don’t forget to check CDL often for the latest Bold and the Beautiful spoilers, updates and news.