The Bold and the Beautiful (B&B) Spoilers: Thomas Shocked and Furious to Learn Ridge and Caroline’s Baby His Son 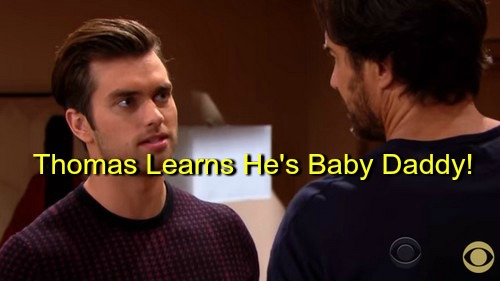 The Bold and the Beautiful spoilers tease that Rick will soon find out from his mom Brooke Logan (Katherine Kelly Lang) about Ridge’s irreversible vasectomy and it’s a short road from that critical fact to figuring out that Thomas is the father of Caroline’s kiddo that will be born soon.

But it might serve Rick better to blackmail Ridge about the secret than just out him. However, Rick would also love to publicly humiliate Ridge. Rick will talk to Eric Forrester (John McCook) soon and will imply that Ridge isn’t the man that he pretends to be, but Rick won’t blab the secret yet.

But will Rick tell Thomas the truth so he can go after his dad Ridge? Or will Thomas overhear Rick talking to someone about the secret? B&B spoilers know that surely Rick will tell Maya Avant (Karla Mosley) as soon as he knows. The only reason it matters how Thomas learns the tale is whether it impacts Rick’s plans.

But either way, Thomas will be on to his dad’s scheming ways soon and the coming confrontation will not be pretty. We’ll see on this week’s episode where Caroline gives birth that Thomas will be there at the onset of Caroline’s labor while Ridge is at the office bickering with Rick.

And despite Thomas’ friendship with Caroline – and purported role as the brother of the child she’s giving birth to – Ridge will tell Thomas to butt out of the birthing process when he shows up. As Ridge, Caroline, and the midwife head upstairs, looks like Ridge will stop Thomas.

Thomas feels very dismissed and hurt – and then when the truth comes out, he’ll know exactly why Ridge has been shutting him out. Thomas will be shocked to learn that both his father and Caroline have been keeping this massive secret from him.

It will be doubly hurtful since not only did Thomas and Caroline just have a very deep conversation about him changing his life, but he also asked Caroline directly if her baby was his back in October and she looked him in the eye and said no.

What will the fallout be from Thomas discovering the truth? It won’t be pretty! Can Ridge convince Thomas to keep quiet? Or will Thomas not even give his dad the chance to defend himself and just shout it out for all the Spencers and Forresters to hear?

What do you think B&B fans? What do you want to see Thomas do once he finds out that his dad has been lying and intended to steal his baby to raise as his own? Share your comments below and come back to CDL often for more “The Bold and The Beautiful” spoilers and news.