‘The Bold and the Beautiful’ Spoilers: Updates November 21-25 – Fierce Faceoffs, Romantic Surprises and a Thanksgiving Truce 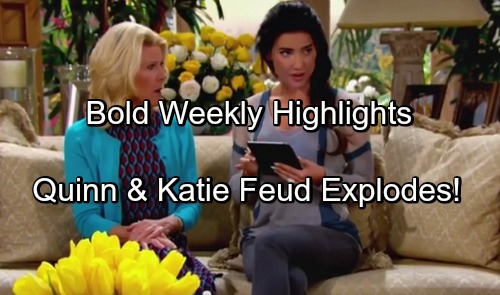 The Bold and the Beautiful (B&B) spoilers and updates for the week of November 21 – 25 tease that the tension will mount as Thanksgiving approaches. Katie (Heather Tom) and Quinn (Rena Sofer) will certainly take their feud to a new level. When Quinn forbids Katie to buy the house next door, the conflict will really heat up.

Katie will insist that she’s increasing her offer. She wants to live in this home, even if it means having Quinn as a neighbor. They’ll bicker, but there won’t be much Quinn can do about Katie’s plans. It appears Katie will officially make the move soon, but you can bet that Quinn won’t let go of her hostility.

Meanwhile, B&B spoilers say Nicole (Reign Edwards) will stew over Zende’s (Rome Flynn) actions. She was devastated when she found him in bed with Sasha (Felisha Cooper). Nicole feels like that image is permanently stuck in her brain. She only thinks of betrayal when she looks at Zende now.

The Bold and the Beautiful spoilers reveal that Zende will hope to change that. He’ll come up with a romantic surprise to win Nicole back. These two may not completely reconcile yet, but Zende will make some progress. By the time everyone comes together for Thanksgiving, Nicole will have a smile on her face.

Elsewhere, Wyatt (Darin Brooks) may be feeling a little blue. Steffy (Jacqueline MacInnes Wood) will invite Wyatt to join them for turkey and all the trimmings. She’ll want Wyatt to know that she still cares about him. Steffy realizes this has been a tough year for Wyatt. It’s been a tough year for Steffy and Liam (Scott Clifton) as well.

Of course, Quinn was the reason for all of that Bold and the Beautiful drama. Liam and Steffy are just lucky that they’ve finally found some happiness. The same can’t be said for Wyatt, but maybe he’ll get there eventually. After all, Ivy (Ashleigh Brewer) is currently single. There’s a chance that they’ll reconnect at some point.

As for Quinn, she’ll get a break from the backlash. She’s not proud of her past, but she thinks she’s done enough to prove that she’s changed. Her behavior around Katie tells a different story, but that’s not important right now. Thanksgiving will give Quinn a brief moment of peace and joy.

Quinn and the rest of the gang had better not get used to it. By next week, the quarrels will be back in full force. Until then, Bill (Don Diamont) and Ridge (Thorsten Kaye) won’t truly manage to put their strife on hold. They’ll remain prickly as the stuffing and pumpkin pie get passed around.

Ridge and Bill are going to be at odds while Brooke (Katherine Kelly Lang) makes a decision about her future. After that, one of them will undoubtedly be a sore loser. Bottom line, this rivalry is never going to end. We’ll give you updates as more news emerges.

NEXT WEEK: Give thanks, give love, give threats ‘cause what’s a holiday without a little chaos?! #BoldandBeautiful