BY Stormy Elizabeth on April 24, 2016 | Comments: one comment
Related : Soap Opera, Spoiler, Television, The Bold and the Beautiful 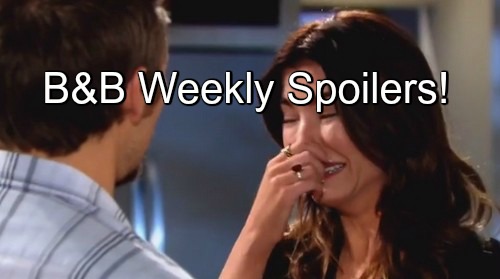 “The Bold and The Beautiful” (B&B) spoilers for this week’s episodes from Monday, April 25, through Friday, April 29, reveal Ridge’s dirty secret won’t go away, Bill wants revenge against Quinn who hides in plain sight, and Liam won’t respect Wyatt’s marriage to Steffy for a moment. Here’s what to expect this week on B&B.

Bill Spencer (Don Diamont) is determined to make Quinn Fuller (Rena Sofer) pay for kidnapping Liam Spencer (Scott Clifton) and sets up a search effort to locate his devious ex. Quinn is closer than Bill realizes when she sneaks back into LA to see Liam.

The Bold and the Beautiful spoilers say Liam will be stunned when Quinn shows up to see him. They are face to face and Quinn wants to explain her side of things but Liam sees red. Will Liam choke the life out of his Eve? Can she get away before Liam turns her over to the cops or his livid father?

Will Deacon Sharpe (Sean Kanan) save her again? Liam has no plan to respect Wyatt Spencer’s (Darin Brooks) new marriage to Steffy Forrester (Jacqueline M Wood). He wants Steffy back and makes an immediate play to romance her.

B&B spoilers warn that Liam invites Steffy over and makes some moves that remind her of the history she and Liam shared. A confused Steffy then turns to Ridge Forrester (Thorsten Kaye) for some fatherly advice. Wyatt also goes to his dad Bill to talk about the trouble with Liam.

Intern Charlotte (Camelia Somers) is back at Forrester Creations. Can Thomas Forrester (Pierson Fodѐ) keep his hands to himself this time? Thomas swore to Caroline Spencer (Linsey Godfrey) that he’s turned over a new leaf, but can he prove it when tested?

Zende is stunned by Nicole sharing her hopes for the future. Sasha Thompson (Felisha Cooper) is not pleased when her secret dad Julius Avant (Obba Babatunde) continues to reject her and won’t support her new relationship with Zende.

Ridge is irritated by Katie Spencer’s (Heather Tom) dogged persistence about Dr Wolin’s death and baby Douglas’ paternity. Katie prods him about it and Ridge tells her to leave it alone but now that Rick Forrester (Jacob Young) is sniffing around, it’s just a matter of time.

Don’t miss any of the action on B&B this week of Monday, April 25, to Friday, April 29, and check back with CDL every day for more “The Bold and The Beautiful” spoilers and news.