The Bold and the Beautiful (B&B) Spoilers: Week of February 1 – Quinn and Liam Get Weird – Sasha Seduces Zende

BY Monica DelRay on January 30, 2016 | Comments: one comment
Related : Soap Opera, Spoiler, Television, The Bold and the Beautiful 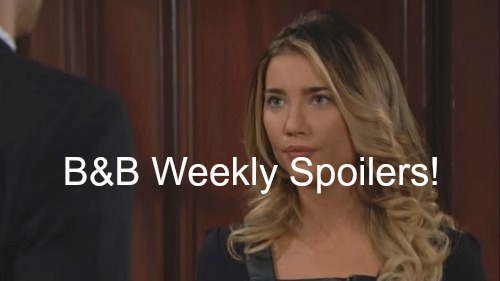 “The Bold and The Beautiful” (B&B) spoilers for the week of Monday February 1 through Friday February 5 reveal Quinn keeps Liam trapped, Brooke and Katie are still feuding, and Sasha makes a big move. Here’s the spoilers to get you ready for next week’s episodes.

Quinn Fuller (Rena Sofer) is pleased to hear from Wyatt Spencer (Darin Brooks) that he and Steffy Forrester (Jacqueline MacInnes Wood) are getting closer but things between her and Liam Spencer (Scott Clifton) are getting weirder.

Liam wants to know more about how they know each other and Quinn has to make up some balderdash history to keep him passive and at the cabin to allow Wyatt time to woo Steffy but them Liam asks tougher questions.

Quinn will soon realize she may have bitten off more than she can chew, though, when Liam gets too close for comfort. Plus, Steffy won’t move forward until she talks to Liam, so this whole situation is building to something explosive.

Sasha Avant (Felicia Cooper) talks to her dad Julius Avant (Obba Babatunde) who continues to be unsympathetic about her losing the modeling job. He tells her again to leave LA and go back where she belongs. That sets Sasha off – she’s had enough.

Sasha will lash out at Julius and tell him she’s sick of being his dirty secret and threatens to out herself as his love child. Julius believes her and is worried. Sasha is determined to change her story and decides to make a move on Zende Forrester (Rome Flynn).

When they get time alone, Sasha offers him a no-strings night of passion and Zende is very tempted since he’s not getting any loving from Nicole Avant (Reign Edwards). Will he sleep with her? And how long before Nicole finds out they were getting cozy?

Katie Spencer (Heather Tom) continues to rage at Brooke Logan (Katherine Kelly Lang) and gets progressively moodier. Brooke blames herself for her loose talk about loving Bill Spencer (Don Diamont) even though she didn’t shag him.

Brooke and Bill have a chat and decide that Katie seems off the rails. Bill tries to get them to reconcile but Katie won’t have it and her bad attitude spreads out onto others. Is Katie struggling with a health crisis? Is her ticker going bad again and that’s why she’s freaking?

Also Ridge Forrester (Thorsten Kaye) and Rick Forrester (Jacob Young) are headed for an epic family feud over who rules the roost at the Forrester mansion. Ridge starts tearing down walls and Rick goes off on his brother.

All this and more next week in the Monday February 1 to Friday February 5 B&B episodes. Watch then check back with CDL for more “The Bold and The Beautiful” spoilers.