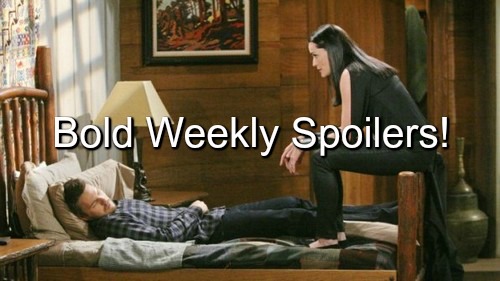 “The Bold and The Beautiful” (B&B) spoilers for the week of Monday January 25 through Friday January 29 reveal more drama in the Liam-Steffy-Wyatt triangle and with Brooke-Bill-Katie. Quinn’s scheme carries on and more – here’s the spoilers you need to get you ready for next week’s B&B episodes.

Wyatt Spencer (Darin Brooks) made major headway with that sexy surf session with Steffy Forrester (Jacqueline MacInnes Wood) that turned into a make out session. On Monday, they’re back at her place and Wyatt says all the right things.

However, Steffy isn’t 100% sure that she and Liam Spencer (Scott Clifton) are done and hesitates to go too far. But since Liam is in Quinn Fuller’s (Rena Sofer) devious grasp, Steffy will soon get another message that convinces her she and Liam are really over.

What will Quinn send? Perhaps a naughty selfie with Liam in bed with an unseen woman? Or will it just be a hateful text that tells her to get a life and he doesn’t love her? Whatever Quinn sends, it’s enough to push Steffy too close to Wyatt.

Looks like they may get intimate – which is ironic because that’s what Liam already thinks they did. Will they go ahead and do the deed that Steffy has already been punished for? Later in the week, Wyatt gives Steffy a present to help her move on – what could it be?

Quinn struggles with what to do with Liam and she’s weirded out as he continues to act strangely towards her. Does Liam think she’s Steffy? Hope? Obviously when Liam kissed Quinn’s hand he didn’t think he was smooching his brother’s mother, but there’s no telling what he may do while he’s out of it.

Brooke Logan (Katherine Kelly Lang) tells Bill Spencer (Don Diamont) they can’t indulge their feelings and they have to take a step back or she’ll quit her new job at Spencer Publications. But a Brooke-Bill conversation about their feelings will be overheard by Katie Spencer (Heather Tom).

B&B spoilers indicate that Katie overhears a love discussion and assumes they have acted on these feelings and lashes out. Katie will physically attack Brooke this week in anger thinking Brooke is trying to steal Bill away from her yet again.

Katie also turns on Bill and makes threats about their marriage based on what she heard him say to Brooke. Looks like it’s a full-on Logan sister war and even though Bill hasn’t done anything with Brooke yet, he’s obviously thinking about it.

Eric Forrester (John McCook) pays Bill a visit to talk about the conflict between Katie and Brooke and how to resolve it. But is Bill having second thoughts about giving up Brooke? Is he ready to lay waste to his marriage to Katie get back with his ex? Can Eric talk sense to Bill?

All this and more on the B&B shows from Monday January 25 through Friday January 29. Don’t miss a moment of the CBS soap and check back with CDL often for more “The Bold and The Beautiful” spoilers and news.