The Bold and the Beautiful (B&B) Spoilers: Week of May 16 – Arrest and Tears – Birth and New Pregnancy – Cheaters Caught

BY Stormy Elizabeth on May 14, 2016 | Comments: 3 comments
Related : Soap Opera, Spoiler, Television, The Bold and the Beautiful 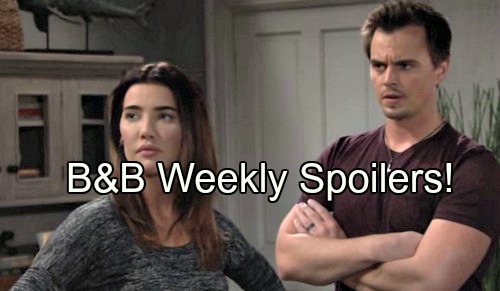 “The Bold and The Beautiful” (B&B) spoilers for this week’s episodes of Monday, May 16 through Friday, May 20, tease a birth and another baby may be on the way. An arrest is made and one married couple has surprising trouble in the bedroom. Here’s what you’ll see on new episodes this week on B&B.

Sasha Thompson (Felisha Cooper) wants to have a lazy romantic day with Zende Forrester (Rome Flynn) but he seems to be a million miles away and Sasha notices. Zende’s mind is clearly on Nicole Avant (Reign Edwards). That eats at Sasha’s self-confidence.

Quinn admits she did wrong by Liam then asks forgiveness. Quinn also makes it clear she still loves Liam and thinks they really had something together. Later, Liam tells Wyatt and Steffy that Quinn should be forgiven if they can find a way to do it.

Will Liam drop the charges against her? Liam has talked about how Quinn took good care of him and he didn’t call the cops on her when Quinn showed at his place. Is Quinn set for a release from jail and another shot with Liam? Fingers crossed!

Sasha talks to Caroline Spencer (Linsey Godfrey) after Caroline tells her that Nicole is in labor. The girl-talk spawns an idea for how Sasha can keep Zende at her side. Brooke Logan (Katherine K Lang) and Eric Forrester (John McCook) talk about the joys of family as they prepare for the birth of a grandchild.

As Nicole goes into labor, Zende sneaks into delivery room wearing scrubs to be with his true love. Zende will admit he made a mistake and should have been more tolerant of her choice to give her sister Maya Avant (Karla Mosley) a baby.

Julius Avant (Obba Babatunde) will show up later, but he may be facing a chilly reception from his family. Zende and Nicole make plans to reconcile now that her baby mama drama is done but then Sasha tells Zende she’s pregnant with his child – is that a lie? Could be.

Zende now has to decide between Nicole or the mother of his putative child Sasha. What will he do? Back at the Spencer house, Brooke drops by with a surprise gift for sister Katie Logan (Heather Tom) but Katie isn’t home so she decides to leave it on her bed.

Problem is, Bill Spencer (Don Diamont) walks in wearing just a towel but then Katie comes home. Brooke panics and doesn’t want to face more cheating allegations so she hides under the bed but then freaks when Katie drops her panties and they land right in front of her nose.

Katie storms out, certain that her sister and hubby were cheating and Brooke tries to defuse things before they get more explosive but it looks things are worse. Katie’s increasingly agitated behavior has Bill worried about her parenting abilities. Trouble is brewing there.

Don’t miss a moment of the B&B action on the new episodes the week of Monday, May 16, check back with CDL for daily “The Bold and The Beautiful” spoilers and news.