The Bold and the Beautiful (B&B) Spoilers: Will Crazy Quinn Marry Amnesiac Liam as Events Spiral Out of Control? 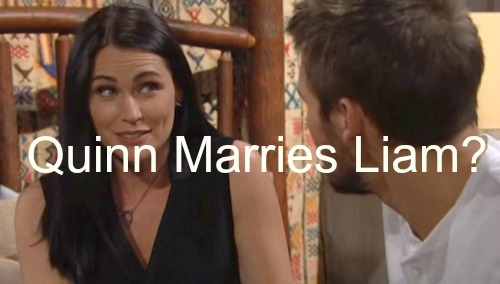 “The Bold and The Beautiful” (B&B) spoilers indicate that Quinn Fuller (Rena Sofer) is not done crossing boundaries with her kidnapped boy toy and we may see her and Liam Spencer (Scott Clifton) get intimate in coming days. But will Quinn also trick Liam into marrying her?

When Deacon Sharpe (Sean Kanan) showed up to the Topanga cabin, he delivered annulment papers and said that as soon as Quinn signs, they are legally done. That was spelled out very clearly for viewers. Why? Because it will likely become important soon that Quinn is legally single.

We know that she’s falling hard for Liam despite knowing it’s the dumbest thing to do and that his memory will eventually come back. B&B spoilers also indicate soon that they will seal the deal and shag. But what if Quinn goes crazy overboard and decides she wants to try and keep Liam for herself?

Quinn could easily convince brain addled Liam that she wants them to “renew” their vows since they are making a fresh start. But, in reality, if she hid the paperwork from him that he’s signing or otherwise tricked him, he could be marrying her for real.

Amnesiac Liam really likes Quinn as Eve to his Adam and she seems to be able to talk him into almost anything. Imagine Liam’s horror if his memory returned and not only was he shagging his brother’s mother but also married her?

It would be very hard for Steffy Forrester (Jacqueline MacInnes Wood) to get past Liam sleeping with Quinn and then marrying her. And while Liam could very easily get a marriage that occurred under those circumstances annulled, he might not.

Liam also has feelings for Quinn and those won’t vanish even when his memory returns. Let’s hope that the B&B writers explore more of this forbidden love because it’s the freshest thing to happen on “The Bold and The Beautiful” in a long time.

Steffy and Ivy Forrester (Ashleigh Brewer) fighting over Liam is old hat and so is the Bill-Katie-Brooke love triangle they recently warmed up again. Quinn and Liam falling in love is a welcome twist on the tired old amnesiac plot and it’s exciting to watch.

Let’s hope that even once Liam’s brain fog clears and he remembers who he is and Quinn realizes she stepped over the line, that their attraction will continue and neither will be able to deny that they want to be together.

Stay tuned to CDL for more “The Bold and The Beautiful” spoilers and news.