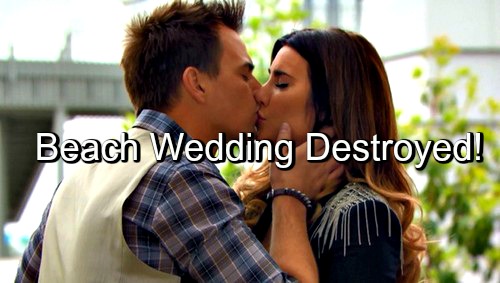 “The Bold and the Beautiful” (B&B) spoilers reveal that Wyatt (Darin Brooks) and Steffy’s (Jacqueline MacInnes Wood) wedding will get underway on an upcoming episode. You’d think that all the the lingering doubts about Liam (Scott Clifton) would give Steffy pause.

However, Steffy’s moving full-speed ahead anyway.

You’d also think Wyatt would know better than to do this after what happened with Hope (Kim Matula). Then again, Wyatt’s never been too smart when it comes to women. In spite of the red flags, this rushed pairing will visit the beach to say their vows and begin their new life together.

That means it’s time for The Bold and the Beautiful spoilers to start examining how this ceremony might go terribly wrong. B&B fans know that weddings, parties and other family gatherings are prime targets for soapy mayhem. An exciting incident could easily derail any celebration.

Ridge (Thorsten Kaye) and Caroline’s (Linsey Godfrey) wedding went off without a hitch, but that was the exception to the rule. Besides, can we really even call whatever that was a wedding? Maybe Bill (Don Diamont) is right when he says that Ridge is cheap.

As for Steffy and Wyatt’s nuptials, there’s a good chance that some type of chaos is in the works. Liam might have his memory back by then. Perhaps Liam could get the scoop from someone and rush to stop the wedding. B&B viewers would want to pass the popcorn for that!

We can’t forget about Deacon (Sean Kanan) either. Quinn (Rena Sofer) pushed Deacon into the crashing waves, but that doesn’t necessarily mean he’s dead. Unlike when Aly (Ashlyn Pearce) was killed off, there’s been no big announcement about Sean Kanan’s departure.

What if Deacon ends up stopping the ceremony to expose Quinn’s web of lies and attempted murder?

On the other hand, Deacon could have met a grisly fate after all. A dead body washing up beside Wyatt and Steffy would certainly put a damper on their big day. Regardless of what unfolds, it sounds like we’re in for some wedding surprises on the CBS soap.

Stick with “The Bold and the Beautiful” for updates on the craziness to come.

So B&B fans, what do you think about the news that Wyatt and Steffy’s wedding is coming up? Is something bound to spoil it? Will Liam or Deacon crash the ceremony and cause pandemonium?