‘The Bold and the Beautiful’ Spoilers: Wyatt Forbids Quinn To Move In with Eric – Thomas Insists Liam Is Steffy’s True Love 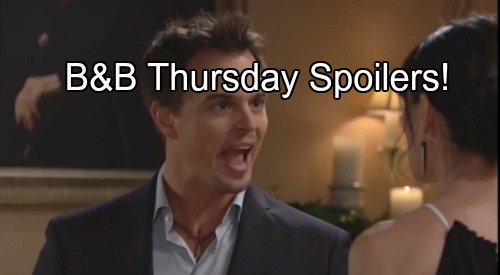 The Bold and the Beautiful (B&B) spoilers for Thursday, August 18, tease that Quinn (Rena Sofer) and Eric (John McCook) will discuss the tricky situation they’re facing. Quinn will point out that her triumphant return didn’t go over so well. Eric won’t think Quinn needs to worry about the rest of the Forresters. He’ll contend that his opinion is the only one that matters.

Later, we’ll see a confrontation go down at the mansion. The Bold and the Beautiful spoilers say Wyatt (Darin Brooks) will storm in and immediately lash out at his mother. He’ll want Quinn to understand that she’s making a huge mistake. Eric will rush to Quinn’s defense. He’ll suggest that Quinn brings joy to his life. She gives Eric something he didn’t know he was missing.

Wyatt realizes how much is at stake. Steffy (Jacqueline MacInnes Wood) can’t handle Quinn’s relationship with Eric (John McCook). She feels like Quinn is just going to trigger more drama. In fact, Steffy told Ridge (Thorsten Kaye) that this could be a deal-breaker.

Ridge will try to support Steffy, but she’ll be at the end of her rope. B&B spoilers state that Steffy will gripe about all of the turmoil Quinn has caused. She’ll shout that she’d be married to Liam (Scott Clifton) right now if it weren’t for Quinn.

It sounds like part of Steffy might be using this as an excuse to get out of her marriage. No one can really blame her. Quinn’s manipulation changed the course of Steffy’s life. Liam may be Steffy’s soul mate, but Quinn made sure she sealed the deal with Wyatt instead.

While Steffy mulls everything over, Liam will get a pep talk from Thomas (Pierson Fode). They’ll talk about what’s happening with Eric as well as what the future might hold for Steffy. The Bold and the Beautiful spoilers reveal that Thomas will be on Liam’s side. He’ll believe Liam is the real love of Steffy’s life.

Liam will agree that Steffy has been denying her true feelings. He’s desperate for a chance to reunite with Steffy and build a life together. Quinn robbed Liam of his dream woman, but he’s hoping Wyatt’s nightmare will provide a window of opportunity. Thomas will promise to put in a good word for Liam. They’ll both feel confident that Steffy will dump Wyatt soon.

Will Liam get another shot with Steffy? Will an obstacle emerge before a real reunion can happen? We’ll have to wait and see, but it’s clear that Liam and Steffy are longing for each other. We’ll give you updates on this hot plot. Stay tuned to B&B and don’t forget to check CDL often for the latest Bold and the Beautiful spoilers, updates and news.