The Bold and the Beautiful Spoilers: Wyatt Turns Against Quinn, Sides with Ridge and Steffy – Caroline’s Love Stuns Thomas 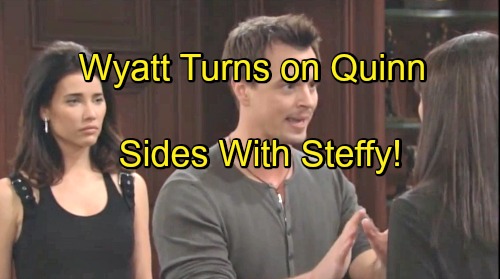 The Bold and the Beautiful (B&B) spoilers for Thursday, October 6, tease that Quinn (Rena Sofer) will complain about the stand that the Forresters have taken. It’s clear that Eric (John McCook) wanted Quinn in his life, but his family is determined to keep Quinn out of it.

Quinn will protest, but Ridge (Thorsten Kaye) and Steffy (Jacqueline MacInnes Wood) won’t be willing to forgive the past.

Steffy will rant that everything she’s doing is more than justified. She’ll insist that it’s time for Quinn to leave the company and walk away from the Forresters.

Wyatt (Darin Brooks) has been somewhat supportive of Quinn lately, but he’ll take a surprising stance in Thursday’s B&B episode. He’ll believe that the best thing Quinn could do is just go.

Wyatt will urge Quinn to respect Ridge and Steffy’s decision. He won’t think Quinn is helping Eric or anyone else by trying to change their minds. Quinn will be hurt by Wyatt’s comments. She thought she might have someone in her corner, but Wyatt’s loyalty still lies with Steffy.

Fortunately, the situation can shift in an instant on The Bold and the Beautiful. Wyatt may not stay on Steffy’s side forever. After all, Ridge and Steffy are lying about Quinn’s name being on the power of attorney form. 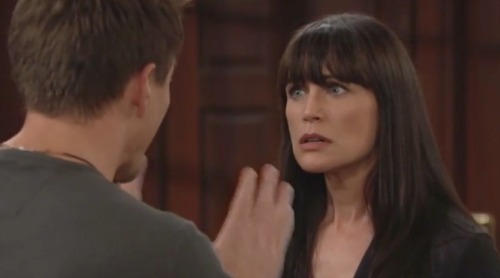 Later this week, Carter (Lawrence Saint-Victor) will determine that he just can’t hide a secret like this. He could get in serious trouble if he keeps his mouth shut. Ridge and Steffy will have to figure out their next move once Carter delivers his news. Stay tuned to see when Quinn will truly get the upper hand.

In the meantime, The Bold and the Beautiful spoilers say Caroline (Linsey Godfrey) will have a deep conversation with Thomas (Pierson Fode). She’s been doing some soul-searching during her trip to New York. Now Caroline has made an important choice about her future and it will certainly affect Thomas.

Thursday’s preview shows Caroline saying, “Douglas is so lucky to have you as a father…and I am so grateful to have you in my life.” It’s possible that Caroline has decided she’s all in and ready to move forward as a couple.

However, Thomas doesn’t exactly have an overjoyed look on his face. He almost appears disappointed and concerned.

Will Caroline suggest that she’s not interested in pursuing a romantic relationship with Thomas? Caroline absolutely wants Thomas around as a friend and Douglas’ dad, but she may not think of him as anything more. Of course, that could change over time.
It’s obvious that B&B has set up a love triangle by including Sasha (Felisha Cooper) in the mix. Unless the writers choose to ditch their apparent plan, something will likely develop between Caroline and Thomas along the way.

Caroline could easily get jealous of Sasha’s connection with Thomas. Whatever the case, Caroline has had a serious realization and she’s about to give Thomas updates on it. Stick with the CBS soap and don’t forget to check CDL often for the latest Bold and the Beautiful spoilers, updates and news.