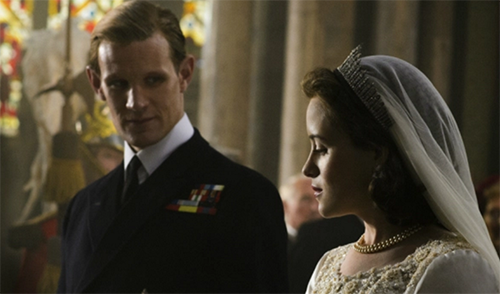 The premiere date for Netflix first season of ‘The Crown’ has been announced. The original series’ first 10 episodes are set to enter the Netflix queue on Friday, November 4. The series will begin by following the early years of Queen Elizabeth’s [Claire Foy] reign.

The synopsis of ‘The Crown’ explains, “This story reveals the political rivalries and romance behind Queen Elizabeth II’s reign and the events that shaped the 2nd half of the 20th century.” ‘The Crown’ spoilers previously revealed that the series will deal with Prince Philip’s [Matt Smith] numerous affairs.

Variety reports that during Netflix panel discussion at the Television Critics Association summer press tour executive producer Peter Morgan revealed that the Royal family is “very, very aware of Netflix’s new drama.” Morgan joked that Netflix had made countless attempts to receive an endorsement from the Royal family.”

The showrunner was serious when he said working independently with no ties to the palace. “I don’t want to be associated with the palace,” Morgan revealed.

Prince Philip and Queen Elizabeth’s marriage will be “storyline A, the through line that takes us through the series.” This hints that in upcoming seasons of the drama may explore Queen Elizabeth’s life as a mother and grandmother.

The relationship between Princess Elizabeth and Prince Philip’s lives became quite complicated after Her Majesty was thrust into her role as queen just 5 years after the couple married. All of a sudden Philip went from a man with a young wife and growing family to the Duke of Edinburgh, forced to walk two steps behind Queen Elizabeth for the rest of his life.

There may even be comparisons to Kate Middleton and Prince William’s marriage if Netflix extends the series long enough. ‘The Crown’ season 1 spoilers have indicated that Queen Elizabeth pursued Prince Philip until he agreed to marry. There has always been speculation that Kate Middleton’s approach to pinning down William was similar. And of course, Prince Philip’s alleged affairs parallel those same allegations that William cheated on Kate.

If Kate Middleton watches season 1 of ‘The Crown’ it will give the Duchess of Cambridge a look at what her life will be like when William is crowned King? Will Kate be shuffled off to the side? How will Kate deal with walking two steps behind William for the rest of her life?