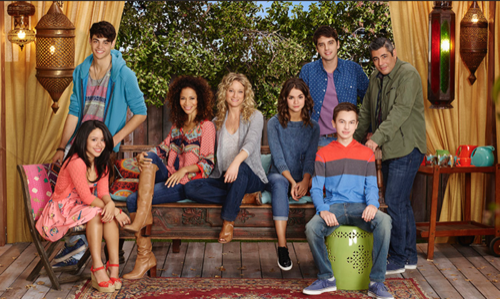 Tonight on ABC Family their hit drama The Fosters returns with an all new Monday, August 15, season 4 episode 8 called “Girl Code,” and we have your weekly The Fosters recap. On tonight’s episode, Mariana (Cierra Ramirez) and Jesus (Noah Centineo) compete in the First Robotics Southern California Regionals.

On the last episode, Jesus sustained an injury after he tried to cover for his father who didn’t show up to work. Did you watch the last episode? If you missed it, we have a full and detailed The Fosters recap right here for you.

On tonight’s episode as per the ABC Family Synopsis, “Mariana and Jesus compete in the First Robotics Southern California Regionals. Meanwhile, Lena becomes concerned that Mariana has grown too competitive from the stress; the police warn Callie to stop harassing Patrick Molloy; and Brandon practices for his upcoming Juilliard audition.”

We’ll have a The Fosters recap of tonight’s episode at 8pm that airs on ABC Family. In the meantime, hit up our comments and tell us how excited you are for the next episode of the fourth season of The Foster.

Stef and Lena were seriously going through with selling their house and were even speaking with a realtor on tonight’s episode of “The Fosters” however it seems that neither of them knew how much actually went into selling a house. The realtor had apparently wanted them to get rid of their furniture as well as their pictures in order to set the scene and she also been very clear about wanting the kids to be out of the house while they were showing it off to any interested parties.

So that was going to be a tough one on their family and the parents probably would have fought the realtor on some of her decisions if the police hadn’t showed up just then to talk to Callie. For it appears that Patrick Malloy filed a complained against her.

Patrick had been the only eye-witness that could get Callie’s former foster brother out of jail. So she had tried to appeal to his common decency yet Patrick wasn’t really one for that it because he had claimed that she was harassing him and there also been that thing he did that made him change his alibi. Patrick had allegedly made a deal with the detective on Kyle’s case in exchange for changing his testimony and it wasn’t so hard to guess what that deal was.

He had been caught with an underage child and the charges he was facing had surprisingly disappeared after he changed his testimony about Kyle. But Stef had already suspected that one of her fellow officers had made an illegal deal so she told Callie to leave Patrick alone while she looked into it.

So Callie had tried to take her mind off of what happening and unfortunately she could no longer user Mike’s place to do what she wanted with AJ. Mike had seemingly told the kids that he wasn’t comfortable with them fooling around his place anymore so that had meant they needed to find somewhere new.

However, their somewhere new was just to use Callie’s bedroom when everyone was supposed to be out although Callie had mistakenly forgotten that the realtor was supposed to come by so she ended up getting having sex with her boyfriend by a couple of strangers. And the realtor definitely didn’t look pleased with her.

The twins were participating in the First Robotics Southern California Regionals and for some reason they were making a mess of it. Jesus had apparently done something to their robot to make it come in at the right weight, but his sister felt that he must have done something wrong seeing as their robot refused to operate during Round 1 so Mariana spent valuable time simply yelling at everyone.

Mariana had been under a lot of stress in the lead up to competition. But on competition day, she was just plain rude to everyone. She yelled at Jesus for something she wasn’t even sure of and she then yelled at her mother who tried to tell her to take it easy. So Mariana was quickly losing control of both her team and of herself. She was freaking out and was literally running all over the place just trying to control everything she could get her hands on. And so Lena was so worried that she spent her time mostly on the phone with Stef asking her what to do about their daughter.

Lena wondered if Mariana had thrown herself into her robotics project to take her mind of what happened with Nick. So she felt that their daughter was pushing herself in order to forget what happened however Stef didn’t want Lena to jump the gun so they ultimately agreed to watch how things play out. Yet, one of the reasons Stef didn’t go down to the tournament herself was because she was doing like she promised and was following up on Patrick Malloy. The charges against Patrick had been dropped because it said the teenager involved had been eighteen so Stef went knocking on the that same young man’s door. Where she found out that he had been fourteen when Patrick molested him.

The teenager was still very much a kid even if he did just eighteen recently had told Stef everything. He said that he was told to drop the charges by a detective who threatened to deport his parents if he continued to accuse Patrick of assault. So what the detective on Kyle’s case did was more than just wrong. He went above and beyond to send a kid he knew was innocent to jail for murder and t the same time he allowed a known predator to get off scot-free because of convenience. However, while Stef had did her part and found the proof she needed, Callie had gone against her parents’ wishes and stayed on the case herself. Callie and her new friend decided to play sleuths for the day so they went out and tried to find potential suspects that would cast doubt on Kyle’s conviction.

They visited the old neighborhood and spoke with a few people when one guy told them about this group that would drop fliers advertising handiwork. Though the work was shoddy at best and this group still felt they deserved to get paid so they had intimidated the homeowner. So while that may had frightened off some, it didn’t work with Callie or with the guy that was kinda into her so those ended up pursuing their lead. Which in this case meant Callie and her trustee sidekick followed up on the group they had been told about and then proceeded to stake them out despite how dangerous the situation was although thankfully Callie had proved to be smart in the end.

After she had seen the someone enter the house, she had felt that it was time for them to all the cops. So she delegated before she made a mistake. But Callie wasn’t the only one that learned the art of delegation. Mariana had also gotten her act together and she had joined up with another team as part of an alliance as a way to stay in the competition even though her school had original had a poor showing. So the Mariana that knows how to think things through as well as be there for her team had surprisingly reappeared right when everyone needed her. And it was thanks to Mariana’s initiative, that her school went on to win the competition and have a shot at Worlds.

Yet, Lena had cautioned her daughter. She said it was time for her to focus on her S.A.Ts because college was around the corner, but it seems the family will have to focus on the move as well. Stef and Lena had received an offer on the house and that meant they would have to be out of the place in a relatively short time. So everyone at dinner had felt like it was coming to be an end of an area however a new one was just beginning. And Brandon realized that he was getting closer to his Julliard dream even if that meant he wouldn’t be able to stay in a relationship with Cortney.