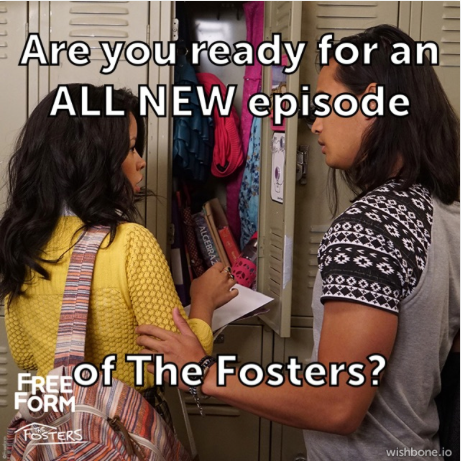 Tonight on ABC Family their hit drama The Fosters returns with an all new Monday, July 11, season 4 episode 3 called “Trust,” and we have your weekly The Fosters recap below. On tonight’s episode, Callie (Maia Mitchell) gets suspended after she reacts inappropriately to some taunting, but things start looking up for her when she meets a young law student.

On the last episode, the Adams Foster house held on lockdown in their own home following the crisis at school; and Callie and Brandon anxiously waited for their mothers to address their behavior in Idyllwild. Did you watch the last episode? If you missed it, we have a full and detailed The Fosters recap right here for you.

On tonight’s episode as per the ABC Family Synopsis, “Callie gets suspended after she reacts inappropriately to some taunting, but things start looking up for her when she meets a young law student. Meanwhile, Mariana’s classmates fault her for Nick’s actions; and Jude is invited to Taylor’s youth group.”

We will have a The Fosters recap of tonight’s episode at 8pm. In the meantime, hit up our comments and tell us how excited you are for the next episode of the fourth season of The Fosters.

The Fosters were still reeling from what they had gone through with Nick on tonight’s episode of “The Fosters”, but for now, they have more pressing concerns than what Nick might be doing and whether or not he was receiving some much-needed care.

Unfortunately, Brandon has moved out of the family home in order to be with his girlfriend Cortney so he had left Callie at home as the only one to face the consequences of what they did together. Though sadly there was no sweeping under the rug what they did. They had slept together while Callie’s adoption was going through and that has changed the family dynamic. Neither Stef nor Lena know what to do next to make things better for everyone in the house and quite honestly the couple didn’t even know if they should keep Brandon and Callie separated.

Brandon though had taken it upon himself to move out so that more than anything made Callie feel guilty about what they did. Callie had later tried to talk to Brandon at school about possibly coming home and she was shocked that Brandon had cut her off before she could even finish talking to him. However, Brandon had wanted to get his point across. He said that it was better for everyone that he had left because he could barely tolerate the stares at school and then he told Callie that he was surprised by her reaction at wanting to talk it out because she had always run away from a confrontation before.

Yet, Callie was trying to change her ways and she was in fact, making a lot of progress when all of sudden someone set her off at school. Some airhead had come to her and basically asked if she was only interested in sleeping with her brother or if he had a chance. So Callie had hit him. She hadn’t hit anyone in a while so that incident was a bit of a setback, but that guy was kind of asking for it. He had made it out as if she was easy and that had offended Callie. Who didn’t appreciate being slut-shamed in front of an audience.

Callie however, wasn’t the only one that was getting slut-shamed at school. Mariana was also dealing with small minds there and Jesus wasn’t around all the time to protect her when she needed him. So Mariana got to see up close just how much everyone blamed her for the school shutdown and what Nick did. Although it seems that the reason they blamed her was because they felt she had cheated with Mat. As if that justifies what Nick and that he shouldn’t be held accountable for his own actions.

And yet what everyone at school seemed to want to forget was that Nick chose to do those things because he was mentally unstable and not anyone else. Nick had clearly needed medical help and that’s something neither Mariana nor his family could have provided him with. So rather blame Mariana, Jesus for instance, had pointed out that it had been Nick that stole a gun from his father’s car and again it had been Nick that broke into their house to0 because he apparently just wanted to “talk” to Mariana.

So you would think that meant something though for some reason it didn’t. The student body wanted to blame someone and somehow they settled on the frightened teenager girl over the mentally unstable guy that could have potentially hurt them all so a part of them was living in denial. They simply wanted to blame Mariana for the new security measures at school when in actuality that one thing was more Lena’s fault than anyone else. Lena being the vice principle and the woman that had signed off beefing up security. With a wire fence, security guards, and several metal detectors.

Though lately Lena has been on edge. Lena had been left truly frightened by Nick’s actions and was sort of going overboard in security both at school and at home. So she was just trying to do anything she could to make her family as safe as possible. Lena had already talked to her wife Stef about putting up iron bars on the windows and getting an alarm system. And it seems that’s the same mentality she wished to use at school, but thankfully Monte saw enough to want to slow Lena down on her end.

Lena was right to suspend Callie for breaking the school’s zero policy on violence yet she was ultimately very much wrong on want to use what little of their budget they had leftover for the arts on getting additional metal detectors. That Monte knew they didn’t need. However, there was merely no talking to Lena because she was stuck on reacting rather than figuring out ways to help the student body move forward. So Lena was putting her job at risk with what she was doing and she also managing to upset her kids.

She and Stef were trouble as it was by taking Brandon’s car away because Stef felt that they should take the tough love approach with him, but the couple were apparently dropping the ball with Jude and Callie as well. Callie had gotten worried about her parents wanting to undo her adoption because they hadn’t been communicative with her as they normally were. So she had lashed out and had even gotten on some stranger’s motorcycle because she wanted to run away from being herself for the day. Yet, after they reassured Callie that they do still want her and love her, they then had to deal with Jude questioning his own sexuality.

Jude has been trying to date one of his friends that was a girl and he thought that he could convince himself that he was straight if he focused on it. But his friend Taylor wasn’t one for being used and she saw what was Jude’s real problem. She saw that Jude was shunning his sexual attraction for other boys because he thought being straight would make him “normal” although Taylor had introduced him to her church group and tried to show him that he could be perfectly normal by being true to himself. She introduced him to her good friend Noah who was a pastor’s son and who was also gay. And she had hoped Noah would be able to reach him.

However, Jude had run out of the youth services at church because he thought Taylor had some kind of agenda. So he had gone upset and his parents had done their best to comfort him while telling him that they would love him no matter what sexual orientation he chooses to be. And so hopefully that will be enough for him because he hadn’t really wanted to talk to his parents about what was troubling though he was later on supportive when the family had to come together with the school to discuss whether or not they should keep the new fences up.

Lena had finally returned to her old self and she had questioned the idea of the fences because she said that monitoring should begin at home and amongst friends rather than have armed guards around to just to provide the illusion of safety. So Mariana had spoken up then because there were a few at the school that wanted to keep the faces to be safe yet she told them that she didn’t feel safe because they kept calling her bitch or whore. Though when Mariana and Lena did win their case and the fences were taken down, Mariana had tried to move on when out of nowhere Nick called her. Nick had called because he wanted to know when Mariana was going to visit him at the mental facility.