The Mysteries of Laura Recap 1/13/16: Season 2 Episode 10 “The Mystery of the Downward Spiral” 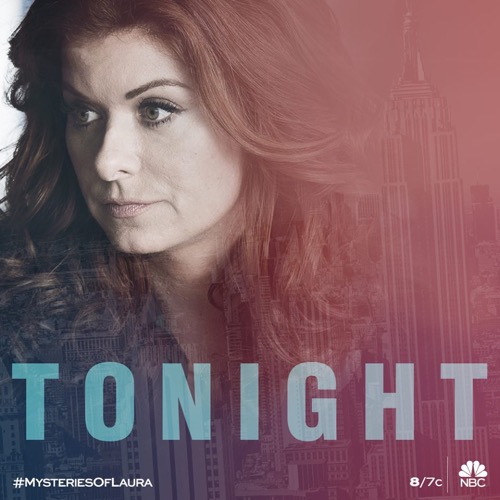 Tonight on NBC The Mysteries of Laura continues with an all new Wednesday January 13, season 2 episode 10 called, “The Mystery of the Triple Threat” and we have your weekly recap below. On tonight’s episode a perfume mogul is killed in a savage manner and the investigation yields no prime suspect.

For those of you who don’t know, The Mysteries of Laura is about Emmy Award winner Debra Messing stars as NYPD homicide Det. Laura Diamond, who manages to balance her time between being a police officer and that of a harried mom with two unruly young boys.

On the last episode, the team tracked a killer involved in an urban treasure hunt, and it lead them to places of extremes, including grungy rooftops and lavish music halls. While on the case, Laura pondered the new manifestations of modern love. Did you watch the last episode? If you missed it, we have a full and detailed recap right here for you.

On tonight’s episode as per the NBC synopsis, “a perfume mogul is killed in a savage manner and the investigation yields no prime suspect. Meanwhile, Laura and Jake are at odds when they try to define the current state of their relationship.”

We will be blogging The Mysteries of Laura season 2 episode 10 with all the up-to-the-minute details at 8PM EST so make sure to come back to this spot and watch the show with us. Make sure to refresh often so you get the most current info! In the meantime, sound out in the comments and let us know what you think of the series so far.

The death of Michael Dunham CEO of Belle Reve has left Laura and Jake even more divided than they already were.

Apparently they disagreed about a suspect. Laura had Michael’s only heir figured out as a grieving son who had admittedly had some trouble in the past. Yet Jake had Jonathan Dunham as his prime suspect and he felt vindicated the more he had heard about Jonathan’s situation.

Jonathan was his father’s only child but that part didn’t seem to matter to Michael. He had left most of his money to a charity set up in his late wife’s name and on top of that he had given control of Belle Reve to the board. It seems he had told his lawyer that he had been worried about what that kind of pressure would do to his son who has been clean for the last eight years.

So Jake felt like Jonathan or John as he’s known had every reason to want his father dead. However, another viable suspect was presented to them by John. John had told them that a couple of teenagers had tagged the front of the store and Max had later recognized that tag as belonging to A.R.K. A fringe group of the animal right’s movement.

Although A.R.K didn’t have a leader or even a webpage therefore it was pretty hard for the NYPD to get into contact with them. And in their case, they got lucky the moment A.R.K tagged another company.

Meredith and Billy ended up having to watch the place that night and eventually they heard odd noises coming from within the building. So they actually went running in expecting to see someone in danger when what they saw was a lion on the loose. Subsequently A.R.K had found out that the company were testing their products on animals so they had knocked out a guard in order to get Simba free. And was going to do the same to the other animals when they got arrested for assault and reckless endangerment.

That lion that had gotten free had found ultimately found its way to queens. So the NYPD had A.R.K on charges that could stick and their leader knew it. But neither he nor his people had anything to do with Michael’s death.

They appear to value life hence they would never lower themselves into killing another person. Even if that person had been accused of illegally extracted animal scents. Which as it turns out was a lie that had been created by a disgruntled former employer.

That former employee had been George Tilleu. George had been the “nose” of the business yet he had a nasty run-in with some guy not long after he had told the company’s lawyer, Brenda Phillipps, that he was thinking about taking another offer at a different company. So George had in fact helped the NYPD while they were trying to figure out who would gain from Michael’s death.

Not that surprisingly it wasn’t George. His nose had been broken in several places and he’ll never work in the business again. However, he had let them in on Brenda’s ruthlessness and they had checked that out for themselves.

And several other former employees had said that Brenda had gotten her goon to rough them up. Yet they couldn’t prove it in court and, on top of that, Brenda had also just been chosen as the interim CEO. So Laura had her pegged as someone that would want to remove Michael’s from his position of power.

But Brenda had a card up her sleeve. She had told Laura in no uncertain terms that John’s fiancée had been sleeping with his late father. And that had put John back into the hot seat.

Only John had sworn to Laura that he hadn’t known about the affair. And so that had left Laura and Jake once again at odds with each other about whether or not John had been lying. In fact, it had gotten so bad that Santiani had to step in and tell them that if they couldn’t agree on a suspect then she was just going to pick one herself.

Thus Laura decided that maybe she could go speak with John again. But that time she agreed to have Jake at her side and so she had felt like she had been played when they both had across a bloody lab coat. The lab coat in question had belonged to John and the blood had belonged to his father. Which meant the detectives had finally gotten their smoking gun.

Yet what they lacked was their murderer in custody. John hadn’t been at his office and so they had to wait for him outside of Belle Reve and while they were doing so – Jake and Laura finally had that awkward conversation that Laura had been putting off. It seems Jake had found out they had missed their window because their kids had told him when their mom wasn’t looking.

And, well, Jake had been upset. He would have preferred it if Laura had simply told him herself but they hadn’t gotten a chance to get into an argument because they had both seen John and Laura had went to follow him.

Unfortunately, Laura followed John so far into the building that she had gotten knocked out when the building had blown up.

Later the police believed that John had detonated a crude bomb and it did seem like it had been part of his plan. They had found drugs in his car as well as a suicide note. And so it had only been natural that John had been the only casualty of the bomb.

But something didn’t sit right and Laura was the only person who felt that way. So imagine her surprise when in the final minutes of the show – John then came out of her bedroom closet with a gun pointed directly at her.