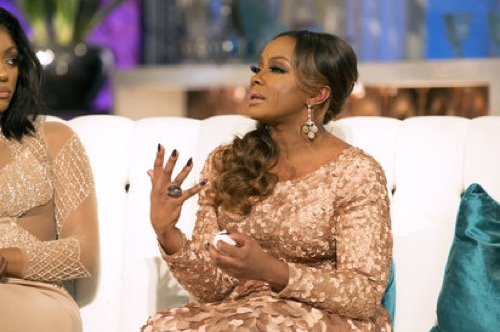 Tonight on Bravo The Real Housewives of Atlanta continues with an all new Sunday March 27, season 8 episode 19 called, “Reunion Part 2,” and we have your recap below. On tonight’s episode, Phaedra Parks reflects on the emotional season she’s undergone with her husband Apollo away at prison and the effect it’s had on her life.

On the last episode tensions rose between Kenya and Phaedra when Kenya accused her of being the ultimate shade thrower. Kandi and Phaedra addressed their deteriorating relationship but with new grievances in the mix, did these two ever be able to put the past behind them and move forward?  Did you watch the last episode? If you missed it, we have a full and detailed recap right here for you.

On tonight’s episode per the Bravo synopsis, “Phaedra reflects on the emotional season she’s undergone with her husband Apollo away at prison and the effect it’s had on her life. Cynthia and Peter disclose the current state of their marriage and address upsetting rumors about their relationship, which leads to a tense verbal encounter between Cynthia and Porsha. The women revisit the drama surrounding the Miami trip and make an attempt to move forward after a tumultuous season.”

This week on The Real Housewives of Atlanta Reunion part two kicks off with the ladies talking about the incident on the Booze Cruise that Kim organized to help Phaedra get over her issues with Apollo. The incident occurred between Cynthia and Porsha and involved a lot of pushing and shoving. Andy asks Porsha why she allowed the argument to escalate. Porsha says “I wanted her to understand that it wasn’t like that and that I was there to support her.” Cynthia says “I realized I may have overreacted and I apologized for my part in the incident.”

In Porsha’s defence we never should have told her to come talk to you while you were both upset.Andy asks Kim what her reaction was after all of this. Cynthia speaks out and said “Kim cried.” Kim admitted that she cried after the incident because she had never been in the middle of anything like that. Cynthia admits that Porsha was grabbed, but says that she grabbed her hands to keep Porsha’s hands out of her face.

Kenya interrupts and says that it was a “Violation of personal space.” Porsha tells her to “Shut up and stay out of it.” The argument gets more intense as Kenya mentions an incident that happened between them years ago and Porsha says “Can we leave our incident and Kenya pulling out a grown woman’s chair?” Porsha then mentions something about Kenya and a one eyed African married minister. Cynthia seems shocked by this and the ladies try to figure out what is going on.

When they come back they talk to Kenya about her family. Kenya talks about an incident when she was a teenager and she told her that she needed a friend and n have to call her mom and her telling me that we would never be friends.” They then ask Kandi how she felt about the situation after watching it back. Kandi says “It made me sad to see that.” Kenya then talks about a phone call she received from her mother after she won the Miss USA pagent where her mother called her and asked her not to speak to the press. Kenya says “I don’t owe her anything and I am not obligated to her.”

Next up are Peter and Cynthia and the state of their marriage. Peter says that he lives in Charlotte and Cynthia lives in Atlanta and they are both busy working on their separate businesses. Andy asks Cynthia if she visits Peter in Charlotte. She says “No.” Andy responds “It sounds like you two are separated.” Peter says “I could be in the military and we wouldn’t see each other every day. That doesn’t mean we are separated.” Andy asks Kenya what she thinks about the state of Peter and Cynthia’s marriage and Porsha says “I think a lot of things I don’t say.”

Porsha says ‘I know how your waitresses get paid.” Cynthia tells Porsha to shut her mouth because unless there is something in it then she doesn’t know what she is talking about.” Porsha tells Cynthia that “It’s all over Atlanta about Peter’s women.” Peter tells Porsha to “Publish the list of women I have slept with and put it out there.”

Cynthia’s little boy Aiden comes out to help host the show for a few minutes and then he is sent to go have his dinner. They move on to talk to Cynthia about their visit to the prison so that Apollo could see the boys. Cynthia says “He was happy to see the boys. I thought it would be more emotional than it was but Apollo wants me to come back alone.” Andy asks Cynthia about the state of her divorce and Cynthia says “It’s in progress despite the fact that Apollo doesn’t want the divorce.” She also talks about the fact that there was some inappropriate behavior going on with some of the other visitors and they couldn’t leave because the prison doesn’t let people out of visitation until a certain time She also says “I am not sure I will be taking the boys back. I will talk to them about that at a later time so people can stay out of my business about that.”

Andy asks her “People like who?” Cynthia says “Everyone who had an opinion about whether or not I take the kids to see him or not.” Kandi speaks up and says “Seeing the kids after their visit to their dad I think she needs to allow him to see the kids because Dylan doesn’t know his dad and Apollo won’t be there forever.” Andy asks Cynthia about the fact that none of the men have stepped up and been role models for the kids. Cynthia says “The men that Apollo was running around with while he was out have not stepped up to help with the boys.” Kandi tells Cynthia that “We were not in a good place when all of this happened with Apollo so we didn’t step up, Now that we are back friends again we will be there to help you with the boys.”

Andy asks Porsha about her relationship with Oliver. Porsha says “Oliver and I are not in a relationship, but we do talk every other day. Andy moves on to address Porsha’s Miami trip. He asks Cynthia about her comment that “Kandi acts like a white woman from suburbia.” Cynthia says that they have to avoid stereotyping black young men. Andy asks who, in the group, found the man threatening. Kandi says she did. Andy asks Kim about the aggression she felt from the man who approached them. Kim says “I didn’t feel threatened by the gentleman at all.” Kenya says “I wish someone in my life would act like that.” Phaedra tells Kenya “You liked that boy. You wanted him and he didn’t want you.” Kenya tells Phaedra “Shut up I did not like that boy.” Phaedra then asks her “Who invited him to the house?” Kenya says “ I didn’t just invite him. I invited everyone.” Cynthia tells Andy “We later found out the gentleman had been in a gun battle and been shot in the leg as well as being in trouble while he was in the NBA.”

Andy asks “Why the ladies didn’t believe Kenya when she said she felt threatened?” The argument ensues as Phaedra defends Kenya. She tells them “Kenya does some crazy things, and regardless of whether they like Kenya or not and what Kenya said to him he had no right to throw up gang signs and come at her aggressively.” This quiets the ladies down and Phaedra asks “Why are you all biting your tongues now?”