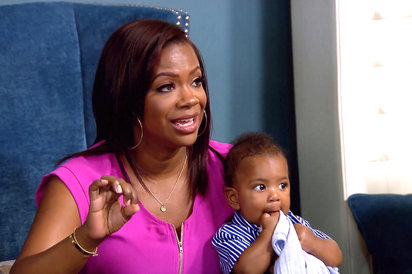 Tonight on Bravo The Real Housewives of Atlanta premieres with an all new Sunday, November 20, season 9 episode 3 called, “Ghosts of Boyfriends Past,” and we have your The Real Housewives of Atlanta recap below. On tonight’s RHOA season 9 episode 3, as per the Bravo synopsis, “Cynthia Bailey struggles with her divorce; Bob attempts to coax Sheree Whitfield to go on a date and Kandi Burruss  receives an unforeseen visit that opens old wounds.”

On this week’s episode The Real Housewives of Atlanta Phaedra, Porsha and Sheree are having lunch. Phaedra tells them about her lunch with Kenya. She says “I wanted to figure out why she kicked my girl out. She told me that a little man will do you.” Porsha and Sheree laugh. As the lunch continues the ladies continue to dish on Kenya’s house.

Kenya is hanging out with Matt. Kenya asks him “Does the age difference between us scare your mother?” Matt tells her “No. She told me not to scare away her daughter in law.” Kenya is shocked to hear this. Todd tells her “My mother wanted to know if you were coming to the family reunion Saturday night.” Kenya says “This is a big deal for me to be meeting Todd’s whole family for the first time. I am really nervous.”

Kandi and Todd are having a meeting about the possibility of having the grand opening of their restaurant soon and in block party style. Kandi says “We will not be having any Chateau Sheree issues where the opening is years in the making.” While they are in the meeting Chris Kelley shows up. Kandi is not happy to see her at all. Kandi says “Nobody can just pop up at the Kandi factory.” Kandi explains “Block is Riley’s dad and Chris is his girlfriend.” Todd gets up and Chris sits down. She tells him “I didn’t mean to take your seat.”

Todd responds “You didn’t take it. I got up for you.” The situation is definitely uncomfortable because Kandi is not happy to see her daughter’s father’s girlfriend in her space at all. Chris asks Kandi “You’re not willing to talk to him at all?” Kandi tells her “I don’t have any respect for him at all.” Chris tells Kandi “I wanted to reach out to you because I see from my side that he should build a relationship with her.” Kandi tells her “I don’t think that Riley wants that.” Chris thanks her and leaves.

Kandi and Todd are having a meeting about the possibility.” The situation is definitely uncomfortable because Kandi is not happy to see her daughter’s father’s girlfriend in her space at all. Chris asks Kandi “You’re not willing to talk to him at all?” Kandi tells her “I don’t have any respect for him at all.” Chris tells Kandi “I wanted to reach out to you because I see from my side that he should build a relationship with her.” Kandi tells her “I don’t think that Riley wants that.” Chris thanks her and leaves.

Kenya is nervous about driving to Cincinnati for Matt’s family reunion. She tells him “I will pay for your ticket first class. That should tell you how much I don’t want to be in this car!” She complains the whole time they are on the road.

Sheree heads over to Bob’s house. Bob tries to get her to drink one of his new shakes. He tells her “It brings back all the nice memories.” Sheree asks him “What about the misery and the pain?” Bob says “It all just goes away.” Bob tells her “I am nervous about being around you. I feel like I need the switchblade.” Sheree tells him “You better take that switchblade and cut yourself.” Bob goes on to talk to her about his health and how he is worried that he is cursed because his dad died at 44 and he is the same age. He then tells her “Your house is bigger than mine so I think I should move in there with you.” Sheree is shocked to hear this. She tells him “Hold up. We have come a long way, but the only hooking up I am doing at my house is the electricity.”

Cynthia is hanging out with her daughter Noelle when her friend Elle and her mom. Elle tells her “I met with Peter a couple times.” Cynthia asks her “What did he say?” Elle tells her “He says that he misses his wife.” Her mom tells her “When I got a divorce I didn’t have the option to work. You can model.” Elle tells her “You guys don’t have to be friends.” Cynthia says “Don’t say that. I don’t want to not be friends with Peter. I just want to be happy. Unfortunately, Peter can’t be part of that as my husband.”

Porsha and Phaedra are hanging out and Porsha drops a bombshell on Phaedra. She tells her “You know that I told you that I want to have a baby. Well I recently reconnected with one of my ex-boyfriends. I don’t want a relationship with him. I just want his sperm.” Phaedra is shocked to hear this. She tells Porsha “I just want you to have the fairy tale.” Kenya says “I’ve been there and done that. I’ve been married. I don’t want a husband. I want a baby. I don’t want him coming along and snatching up my child.”

Kenya and Matt are at his family reunion. It is not going well for Kenya. She is being grilled by both his mother and his sister about her intentions for the relationship between her and Matt. She tells them “I want to help him become a better man and to be the best man that he can be.” His mother says “I can say a lot of things about my son, but he is a good man.” His sister fires back at Kenya and says “We hear a lot about what changes Matt needs to make to make you happy, but what about Kenya? What do you need to change?” Matt steps in and says “Kenya makes me happy the way she is. A lot of things are my own issues that I need to work on.”

Kandi tells Riley “Your dad’s girlfriend stopped by and tried to help build a relationship between you and your dad.” Riley does not seem receptive to this news at all. She says “If he wants a relationship with me then he should be the one to come and not his girlfriend.” Kandi says “If that’s how you feel then so be it.”

Porsha’s ex Todd shows up in Atlanta. After their exercise class Porsha talks to him about her desires. She tells him “I want a family, but i don’t want a husband.” Todd asks her “How does that work? What makes a family?” Porsha tells him “A baby.” Todd seems shocked. Porsha goes on to tell him that she wants him to donate his sperm to give her a baby. He tells her “I can’t do that. I want to see you happy not just because you have a baby, but because you have a family.” Porsha seems a bit taken a back. She tells him “Well we’ll see what happenns if you spend more time down here.”

Kenya and Matt are still at his family reunion. Matt’s sister takes Kenya aside and she tells Kenya “I am very skeptical.” Kenya tells her “I am concerned about whether he is man enough for me because i am self made.” The two women seem to understand each other better after their conversation. Matt walks over and interrupts the conversation but the two women have already made peace.

Kandi and Sheree are working out together. Kandi says “How are ya’ll doing?” Sheree tells her “He’s still trying to get back.” Kandi says “I hate it when men don’t take responsibility.” She then tells Sheree about the visit from Riley’s dad’s girlfriend. Kandi tells Sheree “Porsha used to kick it with Block too.”

Block is talking with his friends and he tells them “She doesn’t bring my daughter around to see me.” Sheree says “That daughter daddy thing is sad because I never had it.” Kandi becomes emotional and tells Sheree. “When I was pregnant with my daughter he told me that he didn’t want anything to do with her. I told him that was fine because he would need her before she ever needed him.” Sheree says “Maybe this woman being in his life has him thinking a different way. I do believe people can change.” Kandi says “I did this for years Sheree.”