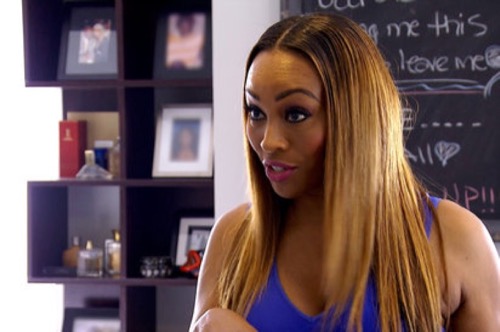 Tonight on Bravo The Real Housewives of Atlanta continues with an all new Sunday April 10, season 8 episode 21 called, “Secrets Revealed,” and we have your recap below. On tonight’s episode, the Georgia peaches continue to throw shade with never-before-seen footage from Season 8 including Porsha William and Phaedra Parks’ makeover of Kim Fields, as well as juicy moments from Peter and Cynthia Bailey’s video-gate drama.

On the last episode the ladies rehashed the drama of Jamaica from the ups and downs surrounding the execution of Cynthia’s commercial to her downplaying her relationship with Kenya to the group. Did you watch the last episode? We did and recapped it right here for you.

On tonight’s episode per the Bravo synopsis, “the Georgia peaches continue to throw shade with never-before-seen footage from Season 8 including Porsha and Phaedra’s makeover of Kim, as well as juicy moments from Peter and Cynthia’s video-gate drama. Plus, more heated moments from Kenya and Kim’s epic showdown are unveiled.”

This week on The Real Housewives of Atlanta: Secrets Revealed Phaedra and Porsha makeover Kim to help her break out of her soccer mom look. Porsha says “If my stylist brought over Kim’s wardrobe for me to wear I would fire her on the spot.” The ladies begin her makeover with a mani/pedi. Phaedra tells her “We are going to make her a standing appointment.” When Kim asks what they mean they tell her “You have to maintain.” Kim says she “Hasn’t had a mani/pedi since her son was born.” After the spa treatment they go to the reveal of porsha’s lingerie line to help Kim spice up her love life.

Meanwhile Cynthia and Peter are struggling to get their marriage back on track after a video surfaces of Peter fondling another woman surfaces. Cynthia says “I can deal with the video, but what I am struggling with is knowing whether or not I am with the right person.” Peter and Todd go out for drinks and Peter tells him “I love Charlotte. We are thinking about moving there.” Cynthia says “When I’m done, I’m done. Please don’t make me get to that point.” Peter goes out to the nail shop with his stepdaughter Noelle to try and talk to her about the situation with her mom and the video. She tells him “You have never given me a reason to doubt you.” Peter tells Noelle “I never cheated on your mom.” She seems to accept his explanation.

When Peter goes home to Cynthia he tells her that he has to catch a plane for Charlotte because he is looking for a house there since he spends significant time there. This upsets Cynthia who says “Now this will feel like a long distance marriage and that is not what I want.” Peter tries to convince her of the practicality of buying the house in Charlotte, however the issue of the cell phone video rears its ugly head and a fight ensues between the two of them. Cynthia tells him “Behave yourself in Charlotte.” Peter tells her “Don’t talk to me like that. I don’t like it when you raise up.”

Porsha is working on becoming a motivational speaker. Her first attempt is at a high school speaking to the students about how to succeed. She tells them “ I am here to tell you about Porsha’s three steps to success.” She tells the students “The first step is to know yourself . Step two is positive affirmation and the third step is to speak life into yourself.” Phaedra is there and is impressed and says “I always knew Porsha is a good motivator, but who knew she had a little Iyanla Van Zant.”

Up next is Cynthia’s discussion with Noelle about her fight with Porsha. She tells her “Porsha and I had an argument and things got a little heated. She got in my face and I kind of kicked her away.” Noelle tells her “I think had the situation escalated you would not be able to handle it. I think you should go to her and apologize and hopefully she’ll do the same. That is really not a good look.” Cynthia is stunned by this advice. She tells her daughter “I actually came in here to give you advice and you turned it around and got me together. Are we having a freaky Friday moment here? Who’s the mom and Who’s the daughter?” They both hug and laugh.

Phaedra is preparing to open her own funeral home and goes to visit her mentor in the mortuary business. He shows her many different types of funeral arrangements including white gloves and Caskets. Phaedra’s search for the perfect funeral house hit a dead end and leaves her frustrated. Her mentor presents her with the key that seals both his father’s and grandfathers casket and asks her to be a partner in his funeral business. Phaedra says “Of course I will.”

Kandi and Todd’s journey to parenthood has been bumpy. They chose in vitro fertilization. They waited until the first trimerster was over to bring their family and friends together and reveal that she was pregnant. Their friends and family surprised her with a pirate themed baby shower. Kim says “I really love the environment at Kandi’s baby shower. It’s so warm and friendly.” Kandi is shocked when she walked into the room. She says “I knew something was up when I saw all of the cars in the parking lot. It was nice that they could come together and do this.” In a game to see who could chug the baby bottle fastest Kin won and Cynthia says “I never knew that Miss Supermarket had in her. No chugging for her, she took it straight to the head.” Everyone has a great time and Kandi makes them promise not to post anything on social media.

Porsha’s love life is up next. First is Duke. These two went house hunting for a penthouse. Porsha says “Even though Duke is young I think he can handle it. He could be running for the hills right now but he isn’t.” Eventually Duke gets traded to Buffalo and breaks up with Porsha via text message.

Kenya decides to “Date like a man by dating multiple people at once.” Kim says “What about online dating?” Porsha makes her profile and has her first online date who takes her to play games at an outdoor park. Porsha says “This place isn’t very classy but I’m enjoying myself so I’ll stay.” When they sit down her date asks her about the craziest place she has ever had sex. This makes Porsha uncomfortable and she says “I think you are being a bad boy.” She later says “I like Gavin, but I am not feeling any romantic sparks.”

Phaedra takes the group to Washington to commemorate the twentieth anniversary of The Million Man March. Kim sneaks off to have some Mommy and Me time. Sharae wonders what Kim is up to. Meanwhile Porsha and Cynthia called Kenya and ask her if Kim had told her that she’d accused Kenya of being messy and created drama in Miami. Kenya says “Did you ask her front face or her back face?” “She never told me anything like that.” In order to keep peace and get things straight Sharee brings the two of them together. Kenya and Sharee are having lunch and Kenya says “I feel that Kim is turning against me and I want to talk to her about it.”

When Kim arrives Kenya confronts her. A small argument ensues and Kim tells her “I didn’t say anything in Washington that I didn’t say to you in Miami.” Kenya says “Let’s cut to the chase. Do you have a problem with me?” After a brief pause Kim says “Absolutely not.” Kenya says “Well it seems like you do. Some of the things you have done to me make me think you are duplicitous.” Kim says “I’m sorry you feel that way, but if some of the comments that have been said have a ring of truth to it then you need to own it.” Kenya says “We are not going to sit here and let you run me into the ground. Not today.” Kim asks her “Can I talk?” Kenya tells her “You can talk.” Kim tells her “I don’t have a problem with you. I prefer conflict resolution. I don’t talk behind people’s backs because it’s shady.” Porsha says “Well your actions today at this table are shady.” This makes Kim angry and she decides to leave. Kenya says “It’s ok we are accustomed to you leaving.”