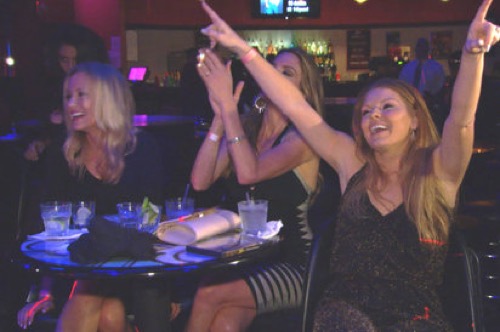 Tonight on Bravo The Real Housewives of Dallas airs with an all new Tuesday, April 25, season 1 episode 3 called, “Making Frenemies,” and we have your recap below. On tonight’s episode Tiffany Hendra features Cary Deuber’s couture closet in her web series, Sanctuary of Style, and discovers a shocking revelation about Mark.

On the last episode, LeeAnne enlisted the help of a Dallas designer to create an extravagant hat for Mad Hatter’s Tea Party, one of the most coveted events on the Dallas social calendar. Brandi struggled with her husband Bryan’s constant business travel as she hosted a birthday party for her mother.

On tonight’s episode per the Bravo synopsis “Tiffany features Cary’s couture closet in her web series, Sanctuary of Style, and discovers a shocking revelation about Mark. Meanwhile, Brandi deals with fallout from Bryan after her alcohol-infused episode at a male strip club and LeeAnne invites Stephanie and Cary to lunch to address Brandi’s behavior at the Mad Hatter’s Tea Party.

Later, Brandi’s mother shares a family secret causing Brandi to question everything she thought she knew about her grandfather.”

Tonight’s season 1 episode 3 is going to be filled with more crazy housewife drama that you won’t want to miss, so be sure to tune in for our live coverage of the show tonight at 10 PM EST! While you wait for our recap hit the comments and let us know how excited you are about this episode of The Real Housewives of Dallas! How do you think this first season is going to play out?

This week on The Real Housewives of Dallas Brandi and her husband are struggling to find time for the two of them because of his busy work schedule.

Stephanie and Brandi meet up to hang out. Stephanie says “We should call Carye and invite her out with us” Brandi agrees and says “Let’s call her right now.” Cary agrees to come out with them.

LeeAnn and Rich have dinner with Elise. LeeAnn says “Before I met Rich kids were not on my radar. I liked to stay up all night, drink and party, but now I love his kids.” LeeAnn says “So I hear you have a boyfriend.” Elise laughs and Rich says “Tell us about him.” Elise laughs again and says “He’s a boy and he’s my friend.” Rich asks her “Why don’t you bring him to the house?” LeeAnn laughs and tells him “Because she wants to keep dating him!” Elise laughs.

Stephanie, Brandi and Carey are trying to decide what to do. After much debate and discussion they decide to go to the strip club. Carey is a little nervous and Brandi tells her “Don’t worry we’ll have a good time.” Carey begs off and tells them “No this is all you.” When they get to the club Brandi, Stephanie and Carey are immediately escorted in. Carey says “I am not accustomed to this. I know owners of classy restaurants, not strip clubs.” Brandi and Stephanie proceed to get drunk in the club which further shocks Carey. She says “They let the three moms out of the house and I can tell this won’t be a one cocktail night.

The next day LeeAnne is hanging out with Tiffany and she makes her a large drink. Tiffany says “That’s why I love this girl. LeeAnne takes day drinking to an art form.” LeeAnne addresses the issue that happened at Mad Hatters. LeeAnne says “In Dallas you are who you walk with, play with, associate with and if you are ostracized then it is your own fault.” LeeAnne tells Tiffany “I am going to invite Brandi and Stephanie to lunch and talk to them about the information I have.” Tiffany says “I feel sorry for her daughters. I don’t know how they are going to grow up, but it won’t be with class.”

Brandi and Stephanie meet up to discuss the events of the night before. Brandi says “I made the mistake of telling Brian about what happened at the strip club. I thought he would understand because we used to party together.” Stephanie says “You would think that Brian would understand the differences between male and female strip clubs.”

Marie and Aaron are talking. Marie says she wants to organize a charity concert to get her feet wet being back in Dallas. She tells her husband “I go to these charity events with LeeAnne and she always introduces me as the best friend she has had for thirty years and ladies look at me with raised eyebrows.” Aaron says “Well maybe you need to make some new friends besides LeeAnne.” Marie agrees and says “I want to get to know Carey, but the kicker is LeeAnne doesn’t like her.”

Tiffany and Carey meet up and Marie asks her to tape some things for her fashion website. When they enter Carey’s closet Marie is stunned. She says “I want to live in Carey’s closet.” Carey tells her “Mark picks out a lot of my clothes. If it weren’t for him I’d dress like a hobo, “ Tiffanny is shocked to hear this. When they get ready to shoot the webisode Carey’s husband Mark actually ends up doing most of the talking and explaining the clothes. Tiffany is once again astounded by Mark’s knowledge of fashion.

Brandi and her mom are sitting down talking. Brandi is shocked to learn that her grandparents were divorced and her mom had chosen to take her grandmother’s side in the divorce, thus disowning him in a way. Brandi says “It feels like the last thirty years have been a lie. I thought my Grandfather had disowened my mom because of her teen pregnancy and instead she sort of disowned him by choosing my Grandmother’s side in the divorce.” Brandi’s mom is very emotional and tells her “He wants to meet you all.” Brandi is overwhelmed and tells her mom “I need a drink after this.”

Tiffany, Carey and their husbands are sitting down talking after the shoot. Mark asks Tiffany “How long will it take you to edit it?” Tiffany tells him “I usually do it the same day, but I am so busy right now it might take me about a week or so.” She then asks Carey and Mark how they met. Mark tells her “I had no intention of getting remarried, but I saw her and I instantly knew.” Aaron says “I understand that whole love at first sight feeling.” The couples continue to talk and Tiffany tells Carey “I need to expand my social base in Dallas.” Carey makes a remark and Tiffany says “I don’t know if Carey is saying that LeeAnn isn’t cool, but I can be friends with both of them.”

LeeAnne is clearing out the house to find stuff to donate when Tiffany shows up. She tells LeeAnne “I did House of Style with Carey the other night.” LeeAnne asks “How is Carey?” in a sarcastic tone. Tiffany tells her “I want to form friendship with Carey and Stephanie.” This does not make LeeAnne happy. She says “If Tiffany insists on being friends with these women then I guess I need to step in and show them what’s right.”

Brian and Brandi are tense. Brandi says “I know Brian has an image to protect with his business and he doesn’t want to see his wife in the strip club.” The two can’t seem to have a conversation and Brandi tells him about meeting her Grandfather. Brian doesn’t seem to enthusiastic. Brandi asks him if he wants to meet her grandfather. Brian says “Sure.” Then he tells her “I have a conference call and I have some things I need to do.” Brandi is upset and says “It sucks when you give your all to someone else and feel like you are getting nothing in return.”

LeeAnne meets up with Carey and Stephanie to try and “School” them on proper social etiquette. The lunch quickly breaks down as Carey takes offense to LeeAnne’s trying to “Clean up her social behavior.” Carey says “It was a fun event and I was there to support the charity.” LeeAnne says “Exactly. It was a social occasion.” Stephanie asks “Who took that article that seriously?” LeeAnne responds “The seventy and eighty year old women who have spent years building up the events reputation.” LeeAnne tells them “You’re reputation is who you are with.” Stephanie says “I am friends with someone who wore a har that some people may not have thought was appropriate and I don’t care.” LeeAnne says “Mad Hatters is an elegant event and those ladies have openions just like you do.” The fight continues until LeeAnne gets fed up and decides to walk away from the table.Stephanie says “This conversation is really uncomfortable and inappropriate and I’m done. Carey agrees.