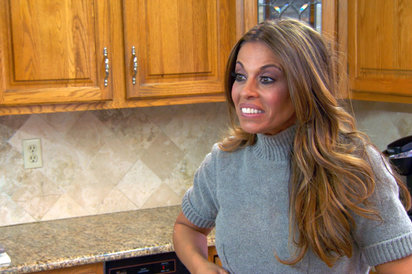 On the last episode, it was Christmas in Jersey! Melissa hosted the Gorga/Giudice Christmas Eve Dinner and reunited with Teresa for the first time in a year. Did you watch the last episode? If you missed it, we have a full and detailed The Real Housewives of New Jersey recap right here for you.

On tonight’s episode, “Jacqueline surprises Teresa by showing up on her doorstep wanting answers. Meanwhile, Melissa shops for her boutique, but hits a road block with her opinionated new business partner. Later, Siggy throws Dolores a true Jersey Birthday Party with leopard everything to give her a confidence boost, but Kathy and Rosie end up feeling on the outs.”

Tonight’s episode is going to be filled with more crazy housewife drama that you won’t want to miss, so be sure to tune in for our live coverage of the show tonight at 8 PM EST! While you wait for our The Real Housewives of New Jersey recap hit the comments and let us know how excited you are about this new season of The Real Housewives of New Jersey!

On this week’s episode of The Real Housewives of New Jersey Melissa is waking her family to start their day. She is also preparing to go shopping for inventory for her boutique.

Teresa is dealing with the repercussions of her ankle bracelet. She says “I can’t walk the kids up the driveway to the bus without being monitored and it’s frustrating.” Once she gets the kids off to school she comes back in she checks the mail. There is  something with her name on it, Joe tells her “I’ll take care of it.” Teresa says “Joe and I have a very old school marriage, Before  I went to prison I never used to pay attention to things. I let Joe handle everything. Now I read everything that has my name on it.” Teresa tells Joe “I’ll wait until you come back and we can do yoga together.”

After Joe leaves the doorbell rings and Teresa opens the door to see Jacqueline standing there. Teresa js genuinely shocked and surprised. She says “What is she doing here?”  Jacqueline comes in and the two women sit down and start talking. She tells Teresa “I felt like when we got back from Arizona you said you wanted to work on our friendship and then you shut me out.” Teresa reminded her that was when things with her case kicked into high gear. She also told Jacqueline “I am not one for sending long text messages.” Jacqueline also talked to her about the fact that she’d said that she didn’t miss their friendship. The two women continued to talk and

Jacqueline also talked to her about the fact that she’d said that she didn’t miss their friendship. The two women continued to talk and Jacqueline asked her “Do you want us to be friends again or not?”     Teresa tells her “When I wrote that note from jail I was reaching out to you to try and mend our relationship,” The two women smile and embrace, Suddenly Teresa remembers an  orthodontist appointment that she is late for. She calls and lets the Dr. know that she will be there soon and the two women part ways.

Siggy and Delores are at Siggy’s house preparing for Siggy’s party. Siggy says “This is the one thing that I got from my divorce free and clear and I kept it even though I moved in with  else and now it needs to be updated.” While they are there Jacqueline comes in and tells them “You won’t believe where I just came from.” They are so excited. She tells them “I was at Teresa’s. I asked her if she just wanted to be associated or if she actually wanted to be friends and she said she actually wanted to be friends.” Both women are so excited. They hug Jacqueline.

Siggy is having dinner with her son, her daughter and her ex-husband. Everyone is sitting around the table laughing and joking. Frank tells their son “Your mother was pregnant with you the first time she threw me out of the house.” Siggy laughs and says “I was.” Frank says “I think it was your hormones.” Siggy says “Yeah. it was my hormones, not the Asian that you were seeing that caused me to throw you out.” Frank laughs and asks “Does that mean that  you want me to move back i?” His son tells him “Dad, we love you, but some things are better the way they are.” The whole group laughs and agrees.

Siggy heads out to meet Teresa for the first time. She is worried and says “I have butterflies about meeting her.” They are planning a Leopard party for her. Siggy says, “I am a real friend and I expect the same thing from those I call friends. I have no idea what to expect from Teresa.” When she walks into the restaurant and the two women come face to face they immediately like each other and sit down to plan the party.

On the night of the party, everyone shows up including Teresa’s cousin Rosie. Delores makes a toast to old and new friends and everyone takes turns telling stories and acting them out. When Teresa tells a story about an intimate encounter in her dorm room between two women all of the women, except Rosie, laugh hysterically. Dolores tells them “This was not the best year of my life, but you have all been there for me and I appreciate it.” Teresa tells her “By this time next year you will be with the man of your dreams.” Everyone sings Happy Birthday.

Everyone is sitting around talking about and Siggy says “My husband is a man on every level. I am having orgasms for the first time in my life. I never did with my ex.” Teresa and Melissa are in the car drunk and just having fun.