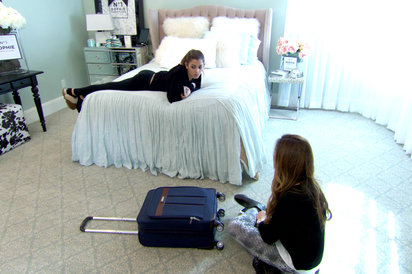 On Bravo TV Tonight The Real Housewives Of New Jersey (RHONJ) airs with an all new Sunday, September 11, 2016, episode, and we have your RHONJ recap down below!  On tonight’s RHONJ Season 7 episode 9 called, “Driving Miss Siggy,” Dolores Catania’s business partner whips her into shape.

If you missed last week’s episode where Melissa Gorga prepared her daughter for a dance & so much more.  Head over to our Real Housewives of New Jersey (RHONJ) recap, Right HERE!

On tonight’s RHONJ episode as per the Bravo synopsis, “Family is everything…or is it? Teresa Giudice has a book signing where a few unexpected visitors show up. Then, after reaching out to Siggy Flicker for relationship advice, Melissa Gorga decides to have a family dinner to get her marriage back on track.”

On this week’s episode of Real Housewives of New Jersey Siggy is sending her daughter on a Jewish trip. She is telling her about the history of the religion and holocaust when her son Joshua comes home from his driving test. Siggy is excited to learn the results of the test. Joshua tells her “I passed. Siggy is very excited and Joshua asks her “When can I get a car?” Siggy tells him  “Your father and I will sit down and have dinner to discuss the rules regarding a car. Frank got a car and he is never home anymore.” Joshua tells her “You should want me to have the latest and the greatest.”

Delores calls Frank Sr to see if he has seen Frank Jr because he has not called her after school. Frank Sr says “I didn’t impose a curfew on him.” Delores says “You don’t have a curfew here because you don’t live here, but he does.” As they are on the phone her son walks in. Delores says “It is frustrating because I just want Frank to be the shadow that he used to be.” She asks her son “Where were you?” He tells her “I went out to eat with my friends.” Delores tells him “I want you to call me when you get out of school.” Frank tells her “I just got my license and I want to go out with my friends and have a little fun.”

Melissa and Joe are having a very heated argument. He tells her “I lost out on a very big deal today because I had to deal with the kids.” Melissa tells him “You should have called me and I would have called my mother or someone to come and help.” Joe tells her “I bring home the cake and you bring home crumbs. I gave you all of this.” Melissa gets really angry when she hears this. She tells him “You make it sound like you took me off 42nd street and put me here. I work just as hard as you do. You built me the boutique and now you want to punish me because I have to be there? Do we need to get some outside help?” Joe tells her “I don’t want a nanny raising my kids. I  want my  wife at home with my kids.”

Teresa takes her daughters over to Jacqueline’s to visit Nicholas. Melania helps Nicholas blow bubbles and she plays with him. Jacqueline asks Teresa “Do you want to go get a coffee?” Teresa says “Yeah.” The two women leave the children playing and sit in the kitchen to talk about Nicholas’ situation for a few minutes. Jacqueline starts to cry and she tells Teresa “It seems so silly that we fight over silly stuff.”

Siggy stops in to visit Melissa. Melissa vents to her about the situation with Joe. She tells her “Joe wants that traditional wife and I don’t want to be just that anymore. I want to show Joe that I can do both.” Siggy says “You two have a great marriage. Joe will come around and you two will make it work. Whoever says marriage doesn’t work is divorced.”

Delores is having dinner with Rosie and Kathy. Rosie is still griping about her issues with Teresa. Rosie says “I would like my family to be mended. Why don’t we all go to the book signing?”  Delores says “Italian family arguments are like the hundred years war. No one knows why they started, but they go on forever. Until everyone has to go to a funeral out of respect and they make amends that way.”

Teresa and Joe head to the yoga studio for a workout to try and help them relax.  Teresa asks him “I know that you only have a month left, but have you talked to the girls one on one?” Joe tells her “No, but they went through it with you. They knew where you were.” Teresa seems stunned to hear this. She says “What do you mean they knew where I was?”  Joe tells her “They have computers. They know.”

Delores heads to the gym and meets with her partner. He tells her “I asked you to be here two to three days a week and you haven’t done that.” She tells him “I know that I haven’t been pulling my weight recently but the reason is because I recently had to put my dog to sleep.” Delores then tells him “I have an idea to offer a free pass to single women on Saturday night.” Her partner says “Why don’t we extend it to the whole weekend?” Delores likes the idea. He tells her “I like the idea. Keep them coming.”

Melissa decides to cook a home cooked meal for Joe and her family. She invites her mother over. She tells her “I want to be successful for my children to show them that there is more to life than just being a wife and mother.” Her mother tells her “I got married during a different time. You don’t have to work.” Melissa is frustrated. She says “I know I don’t have to, but I want to.” Joe comes home and is happy to see Melissa in the kitchen making dinner. He says “Finally there is a home-cooked meal in the kitchen.”

Siggy is out to dinner with her ex-husband and her son. Joshua tells his mother “I don’t like it when you come into my room and grab my butt.” She tells him “I’m checking you for hickeys!” Joshua laughs and says “How by grabbing me?” Siggy looks shocked. Joshua’s dad tells him “You’re mom and I love you and you should stay with her for awhile.” Siggy just laughs.

Jacqueline is on her way to Teresa’s book signing with Dolores and Siggy. As they are driving Jacqueline tells them about the dinner at Kathy’s. She also tells them “Rosie and Kathy both feel deeply hurt by Teresa. They plan to do something about it. They are going to show up at the book signing.” Both Siggy and Dolores are shocked to hear this news.

At the book signing, everything is going well, but Jacqueline is starting to become a little suspicious of Teresa’s outreach of friendship. Even so, she is there to support her. Teresa’s brother and Jacqueline’s husband are talking about Joe Giudice’s situation. Joe Gorga says “He’s being a man about it and not crying about. He’s doing what he has to do.”

Meanwhile, Rosie approaches Teresa at the book signing. She tells her “I texted you. Did you get the texts?” Teresa says “I got a new phone and I lost the texts.” Rosie says “I think the three of us need to have lunch. Would you like to have lunch?” Teresa is hesitant. She says “My schedule is pretty  full right now.” Rosie is upset as she walks away. She goes over to Joe and tells him “ I wanted  apologize to you for the stupid thing I said on New Year’s Eve. I wanted to have a drink with you and make things right.”  Joe is not receptive to her offer and walks away. He asks Teresa if the, book signing is over and the two of them start to leave…