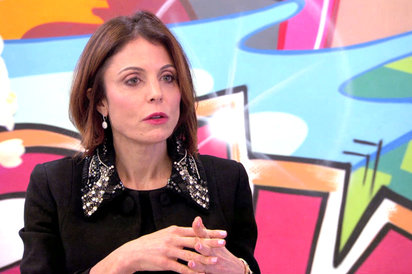 The Real Housewives of New York returns to Bravo tonight with all new Wednesday, May 25, season 8 episode 8 called, “All the Countess’s Men,” and we have your weekly recap below. On tonight’s episode, Bethenny Frankel hosts a holiday gift exchange party where the hot topic of discussion is a trip to the Berkshires. During a walk with Sonja Morgan, Dorinda Medley gives her some disappointing news.

On tonight’s episode as per the Bravo synopsis, “Bethenny hosts a holiday gift exchange party where the hot topic of discussion is a trip to the Berkshires. During a walk with Sonja, Dorinda gives her some disappointing news. Luann introduces her new boyfriend to Dorinda and Jules at an intimate couples dinner. In the Berkshires, the women discover Ramona shares a past with Luann’s man. As Bethenny arrives, the revelation that Luann is living with and “mentoring” Sonja leads to a major confrontation with Luann.”

This week on Real Housewives of New York City Dorinda is hanging out at home. She is preparing to go to Bethenny’s gift exchange. She says “I don’t want to see Ramona, but I am going to go out of respect for Bethenny. Her friend is hanging out with her and asks her about the party. Dorinda tells her about the altercation between her and Ramona. Dorinda says “I don’t know what’s going on. I think Ramona wants to sleep with John. Maybe I should just let it happen.”

Bethenny is preparing for her secret Santa gift exchange. Bethenny is not happy with the hostess outfits. She tells her “You look like Elsa from frozen.” Bethenny’s assistant asks her who else is coming. Bethenny tells her “Jules is coming and be careful with her because she is Asian and she makes everything about being Asian.” Just then Ramona walks in and tells Bethenny that she needs three drinks. Once she makes her requests for the drinks she tells Bethenny “I have a story to tell you.” Ramona tells the girls about the encounter with John and how he put his hands in her face aggressively. The ladies seem shocked at John’s behavior and they question why he would act that way.

LouAnn and Sonja are hanging out and having dinner. Sonja says “It’s nice to have dinner with LouAnn and be able to hang out because even though she has moved in I don’t get to see that much of her.” LouAnn tells Sonja about her encounter with an Ex at John’s party. Sonja seems slightly confused about the relationship between the two. She says “LouAnn you make no sense. You say he was a one night stand in Ibiza, but you called him when you got home.”

Ramona continues to tell the story and as Jules listens she says “Ramona is leaving out half the story. LouAnn left because there was a guy there who was annoying her. I don’t know why Ramona is leaving that out, but whatever.”

Everyone arrives to the party and the tension is high between Dorinda and Ramona. Bethenny takes Dorinda aside after seeing how frazzled she looks to try and talk to her. Dorinda says “I think I am just frazzled with trying to keep everything okay and pretend that everything is good.” Bethenny tells her “You need to spend some time along and helping yourself. I’m not trying to disrespect you or make this about John.” As the party continues Dorinda asks “Who’s all coming to the Berkshires?” Carole says “I don’t want to sleep under the same roof as LouAnn.” Dorinda takes her aside and she tells her “You can protect me and I can protect you.”

Ramona and Dorinda talk and Ramona apologizes to Dorinda for everything that has happened. Dorinda says “Ramona knows that fixing our friendship is up to Ramona. This is a one-sided deal now.” The ladies move on to the secret Santa gift exchange.

The next morning Sonja and LouAnn were hanging out at home. Sonja is curious about LouAnn’s new boyfriend because she is keeping him a secret. LouAnn says “I am dating a new man named Tom. Dorinda introduced us . Some of the women know him and I don’t want to be judged.” LouAnn finds an article about the party ad reads about Ramona being ejected. Sonja says “I was ejected with her. She always seems to get me in trouble.” LouAnn says “Ramona has some nerve to confront me about being a bad influence on Sonja.”

Sonja and Dorinda meet up to go for a walk. Sonja asks Dorinda how she feels about the party being blown up. Dorinda says “It just seems that there is a weird vibe between all of us.” Sonja says “When Ramona is alone with me she is great, but then sometimes she rears her ugly head and that is when she talks bad about me.” Dorinda tells Sonja “I was going to do a three-day thing in the Berkshires, but I am not doing that anymore. Instead, I am going to have the girls come up and then I would like to have a private dinner with you.” Sonja tells her “That’s fine.” Then she wonders if Dorinda is picking sides with Bethenny. She says “Bethenny is the only one I am on the outs with right now.”

LouAnn and her new boyfriend Tom meet up with Jules, Dorinda, and a few other friends to introduce Tom to them. She says “I only wanted to invite my friends who I knew would be supportive.” Immediately LouAnn goes into trashing Ramona. She calls her “Troublemaker and Apologizer.” John makes an inappropriate comment and it brings the conversation to a brief halt. LouAnn says “I don’t want to bring Tom around the other girls because they can be catty.”

Dorinda is preparing her house in the Berkshires for the holiday party with the other women. She says “I believe the Berkshires allows me to be who I truly am. I can’t do that in New York.” Ramona comes in and the two women have a brief conversation. Dorinda tells her “This is my place of peace, where I come to relax and I don’t want any drama up here.” Ramona agrees and the two women go into the kitchen to eat while they wait for everyone else. While they are eating they talk about LouAnn and Sonja. Dorinda tells her “Sonja is upset because she feels excluded.” Ramona then mentions LouAnn’s love life. Dorinda tells her “LouAnn has a new love.” Ramona laughs and says “She probably has a couple.” Dorinda tells her “I am responsible for one.” Ramona asks her “What’s the initial of his first and last name?” Dorinda says “T and D.” Ramona is amused because she says “I think I know who he is because I used to date him.”

Dorinda is upset when Ramona’s dog poops on the floor. LouAnn and Jules are the next to arrive. Dorinda asks them if they have said hello to Ramona. LouAnn says “We haven’t seen her.” Dorinda says “She’s in the living room.” When they enter the living room Ramona is sitting there and the ladies greet each other.

The ladies are talking about the situation with Sonja. LouAnn says “She is really hurt that she is not invited.” Dorinda says “She really does not need to be alcohol and it would not have been good if Bethenny had come and dismantled her.” LouAnn says “Yes it would. It would clear the air.” Bethenny arrives and all of the ladies greet each other. Bethenny says “I made Carole come behind me.” Jules asks LouAnn how the apartment hunting is going and LouAnn says “It’s really difficult because I can’t find anything I really like so I am staying with Sonja. I feel like she needs me right now and I am mentoring her.” Bethenny bursts out laughing. LouAnn asks her “What’s so funny?” Bethenny tells her “You mentoring Sonja is like the deaf leading the blind.” LouAnn asks her “Is that really how you feel about me?” Bethenny says “In this case yes.” Bethenny says “It’s funny. You telling me that you are Sonja’s mentor is like you telling me that Courtney Love is your mentor.” LouAnn mentions Sonja’s new Prosecco and tells her “It’s all over the New York Post that you are sung Sonja for gimmick infringement.” Bethenny tells her “I’m not suing her. I don’t care.” The argument rages on.