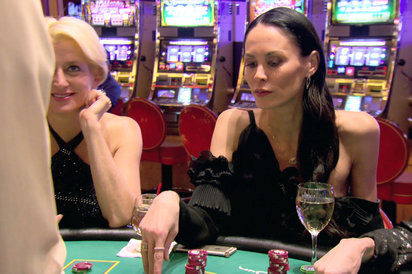 The Real Housewives of New York returns to Bravo tonight with all new Wednesday, July 20, season 8 episode 16 called, “The Countess Bride,” and we have your weekly The Real Housewives of New York recap below. On tonight’s episode, the ladies arrive for a night of fun at the Mohegan Sun Casino and everyone is in good spirits as the dining, dancing, and gambling gets in full swing.

On the last episode, riled up from listening to the girls talk badly about Luann after she left the group dinner, Jules gave Bethenny a piece of her mind. Did you watch the last episode? If you missed it, we have a full and detailed The Real Housewives of New York recap right here for you.

On tonight’s episode as per the Bravo synopsis, “the ladies arrive for a night of fun at the Mohegan Sun Casino and everyone is in good spirits as the dining, dancing and gambling gets in full swing. Once back in the city, Carole and Adam discuss their future and the future of their cookbook that’s still a work in progress. Ramona has conflicting discussions with both Sonja and Dorinda about planning Luann’s engagement dinner. Bethenny packs for a short, but ill-advised trip with Bryn. Jules gets professional help to potty train Rio. And Luann’s engagement dinner serves up a new trip announcement.”

On this week’s episode of Real Housewives of New York City, the ladies finally arrive at the Mohegan Sun. Everyone is a with the suite. They are all trying to choose their rooms and who they are going to room with. Dorinda says “There are two things that always happen on these trips. Ramona always gets the best room and Bethenny and Carole are going to end up sharing a room. After that, it is a free for all.”

Later that night everyone heads downstairs for dinner. Sonja thinks back to the holiday party where Bethenny was not speaking to her a month ago. Bethenny says “I love a whack job. It takes one to know one. What a difference a month makes.” Sonja is very relieved that she and Bethenny have made peace and are back on good terms.

After dinner, the ladies head to the tables to gamble. Jules calls Michael to make sure that he has deposited money into her account. Dorinda says “I don’t like that you have to call Micheal. Not that I have never done that, I just do it on the down low.” Sonja says “I love my time with Bethenny. We will always be friends.” After a couple of hands, Bethenny decides to get up and leave the table. She says “When you’re broke it’s no problem to put fifteen hundred dollars on your credit card, but once you have money you tend to be more careful.” A few minutes later Sonja and Ramona head off to gamble on their own. Then Dorinda decides she is done at the tables as well.

Back in New York Carole tells Adam that her agent thinks that their agent thinks the cookbook has potential to happen. She also tells him “It won’t be out until a year from now.” Carole tells him “I feel like we are the most normal of the group which is weird because of the age difference.” Adam tells her “Whether we are together a year from now or not we will still be friends.” Carole tells him “Now I want us to say how happy we are at the same time.” She says “10” and Adam says “8”. Carole says “Now I don’t believe you.”

Ramona is out shopping with Sonja. She mentions the possibility of having an engagement party for LuAnn and Tom. Ramona says “I am going to text Tom to get in in touch with LuAnn since she is not answering her phone.” Sonja tells her “No, the proper etiquette thing to do is not to text the fiance of your friend, especially when he is your ex. She might think you are trying to create some kind of love triangle.” Ramona says “I am not trying to create anything.” Eventually, the women agree to just plan the party and keep trying to reach LuAnn.

Bethenny is preparing to take her daughter Brynn to Aspen to teach her to ski. She is packing her daughters things with her assistant Julia. Bethenny says “As long as I can get through the trip without bleeding everything will be fine.” Julia tells her “I don’t think it is a good idea for you to be going on this trip right now.” Bethenny says “Well I am not taking her. She is so excited and has been telling her friends that she is going so I can’t disappoint her.” Julia says “Well you are going to do what you want to do, but just be careful.”

Dorinda and Ramona are having lunch. Ramona mentions that she is going to throw LuAnn an engagement party. Dorinda seems pretty shocked. She tells Ramona “I think the natural thing would be for me to do it and invite all the girls since I set them up and LuAnn is most comfortable with me.” Ramona gets very upset and tells her “Fine you go ahead and throw the party. Do whatever you want. I just wanted to do something nice for her to try and make up for the mess at the dinner.”

Jules is trying to potty train her daughter Rio. Samantha Allen, a potty training consultant, comes to the house to potty train Rio because Jules does not want to struggle with doing it. Jules asks her daughter if she has to go to the bathroom and Samantha tells her “I try not to ask the child if they have to go because that makes it seem like it’s an option.”

Dorinda has taken over the planning of LuAnn’s engagement party. Jules AnSonja are the next to arrive and they tell her Carole is going to be late. Dorinda says “I am glad that we didn’t do the trip to Mexico. This gives us a chance to take a much smaller and more intimate trip. What do you guys think?” Dorinda suggests Hawaii. s says “New York is a very small place for these girls. They need to get away.” Carole shows up and says “I am here to support LuAnn and let her know how happy I am for her. I didn’t know I was going to get laid, but you take it where you can get it.”

When LuAnn shows up everyone greets her. She asks “Where’s Bethenny?” They tell her that Bethenny is away with her daughter. LuAnn shows off her eight-karat diamond ring and tells the story of how Tom popped the question. Carole also presented LuAnn with the gift she brought for her. LuAnn is very happy and excited. She says “With this gift from Carole I feel like we have moved over the hump and put the past in the past.” She tells the ladies “Tom and I are not getting married right away. We aren’t getting married until New Years.” Sonja says “Now we have to wait til January? That’s too long.” As LuAnn raises her glass to make a toast Ramona says “To new beginnings for you.” LuAnn laughs and says “I raised my glass just give me a minute.”

Ramona laughs and puts her hand over her mouth. LuAnn thanks all of the women for coming together to celebrate her happiness and they all cheer.