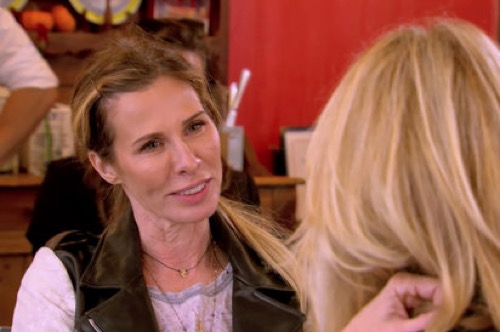 The Real Housewives of New York returns to Bravo tonight with all new Wednesday April 6, season 8 premiere called, “Start Spreading the News,” and we have your weekly recap below. On tonight’s episode, the ladies are back in the city for the fall, and Bethenny Frankel is excited to be living in a home that she loves, all while continuing to find balance between working, dating and dealing with the stress that accompanies a chaotic divorce.

On tonight’s episode as per the Bravo synopsis, “the ladies are back in the city for the fall, and Bethenny is excited to be living in a home that she loves, all while continuing to find balance between working, dating and dealing with the stress that accompanies a chaotic divorce. After a year of lovebird bliss, Carole and her boyfriend, Adam, are still going strong.

Meanwhile, Ramona adjusts to newly single life and takes advantage of all that the Manhattan dating scene has to offer. With her daughter away at boarding school, Sonja experiences empty-nest syndrome and invites Luann to stay at her townhouse, presenting the perfect opportunity to socialize. Dorinda continues to grow in her relationship with John but finds herself constantly defending their relationship. And new housewife Julianne “Jules” Wainstein joins Bethenny and Dorinda for a brunch that goes from sweet to sour.”

This week on the season premiere of The Real Housewives of New York City Bethenney is showing off her new apartment to Dorinda who seems to be really impressed. Bethanny says “I saw Dorinda and John in the Hamptons and she was drinking. I’m not the drinking police. Just don’t lie and say you’re not drinking. As they move into the kitchen Bethanny asks Dorinda what she wants to drink and She tells her “I want a small glass of wine.” They move into the living room and start planning Bethany’s launch party. They discuss the guest list and Bethanny decides she doesn’t want to invite Carole. She tells Dorinda “Carole is in a new relationship and she is all about doing what Adam want to do. They stay in most of the time and eat pizza.”

Carole and Adam are out shopping for Adam’s trip to Africa. Carole says “This will be the first time Adam is traveling outside of the county.”Carole says “It’s weird that Adam and I have been together for a year. I never thought we would have been together.” She says “Adam and I both felt attacked by LuAnne and I won’t put either one of us through that again.”

Ramona is enjoying her new single status. She says “I am single and ready to mingle. I never thought I would be dating at this point in my life, but here I am.” She meets up with her friend Rebecca and her daughter Avery sees her. She tells them “She was always so cool with my friends and it was embarrassing.” Ramona says “Avery doesn’t want me to date anyone. She wants me to be the virgin mother.”

LuAnn is suffering from empty nest syndrome so she decides to go stay with Sonya at her place in the city. Sonya tells LuAnne “I am putting you in my daughter’s room since she is away at boarding school.” Sonya says “I didn’t expect my daughter to go away to boarding school, but her father and his four brothers went so I should have guessed that she would want to go.” Sonya asks her intern to bring them some wine and says “I’m not driving.” Luann says “Neither am I. I have a date tonight downtown.” Sonya is immediately concerned and asks Luanne “You aren’t bringing him back here like we do at the vacation house are you?” LuAnn is quick to assure her that she had no intentions of staying at the apartment with her date.”

Bethenny meets up with Ramona to catch up. Bethenny tells her “You look great. Is that my dress?” For a moment Ramona looks offended and then Bethenny laughs and tells her she is just joking. Bethenny asks Ramona if she has spoken to LuAnne and Sonya. Ramona tells her that she hasn’t and Bethanny proceedes to tell her about an encounter she had with both of them at her surprise birthday party. Ramona says “Now that I’m single I do want to go out with LuAnn because I don’t want people to think I don’t like her, but I also want to be careful because LuAnn has a tendency to drink to much.” Bethanny tells Ramona that Sonja proceeded to hit on other people’s husbands at her party in the Hamptons.

The two ladies then move on to talk about John and Dorinda. They both express an extreme dislike for John and Ramona says “I think Dorinda is too classy for John. He is really dragging her down.” She also tells Bethanny “Dorinda always feels the need to defend John to us and she knows why that is.”

Jules is baking cookies for her daughter. She says “I have a housekeeper and a nanny. I hate to say this, but I would never ask my nanny or my maid to do anything I wouldn’t do.” Jules says “The one thing kids care about is the bribe. They could care less about positive reinforcement.”

Dorinda and John are out to dinner for their anniversary. Dorinda says “Every month John celebrates our anniversary. He knows how many years, months and days we have been together.” John comments on Dorinda’s new dress and she asks him “Is it cut to low?” John laughs, pulls on the top and says “When this is up it’s Johnny be good and when it’s down it’s Johnny be bad.” They move on and John mentions the fact that Dorinda’s daughter Hannah will be moving out in January. Once again he starts hinting that he wants the two of them to live together. Dorinda says “While it is time for Hannah to move out and get her own place without mommy around all the time I am not sure I want John moving in.” John leans over and tries to kiss her after telling her how beautiful she looks yet again and Dorinda backs away telling him “No we are not doing all that kissing in public.”

Bethenny shows up at her office and comments “It smells like weed in the elevator. Did anyone else smell that?” Her assistant tells her it comes from the tenants downstairs. Bethenny jumps in and tells them “We need to be innovative to keep up with the multi million dollar companies. I don’t care what you do while you’re here as long as you get the job done.” She is then handed a $750.00 electric bill which frustrates her on top of all of her other expenses.

Ramona and Carole meet up to catch up. Ramona tells her “I’m happy and the divorce is final.” She tells her “When we settled I got property and he got cash.” Ramona then tells her about a Reggae party that she went to this summer and she kept mispronouncing the word. Eventually Carole says “Ramona is not aware of her mispronunciations, and usually I can let them go but this one I just couldn’t let slip.” Ramona continues to talk about her summer. Eventually Carole says “Ramona has talked and talked and talked and has yet to ask me about my summer.” She then asks her “Are you aware that you talk a lot? You don’t do this on dates do you?” This seems to upset Ramona.

Dorinda and John meet up with Jules, Bethanny and her date John to have lunch. Dorinda says “It’s really funny that Bethenny’s date John looks like her soon to be ex husband. Bethenny asks “Who was friends with Micheal first?” Dorinda responds that her John knew Micheal first.When Jules gets there she apologizes for being late. Imeadiately Bethanny seems to judge Jules. She asks her if she has a job and Jules tells her “No I am a full time mom which is a full time job.” Bethenny says “Jules is like a kid. Micheal makes the money and Jules just spends it without having any clue what it takes to make it.”

As lunch continues the group continues to talk and get to know each other. John congratulates Bethenny on her new apartment and then launches into a spiel about stain guarding the carpet and other dry cleaning issues. Bethenny says“John has the same schtick and we all know it. It is all about dry cleaning.” John says “No matter how many parties you have I will come over and clean them out for you.” Bethenny doesn’t seem impressed and says “I love Dorinda. I am not liking John so much.”