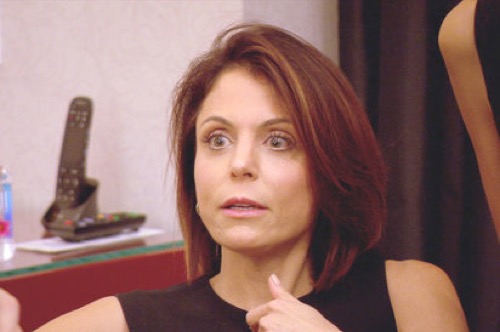 The Real Housewives of New York returns to Bravo tonight with all new Wednesday April 20, season 8 episode 3 called, “The Biggest Boob,” and we have your weekly recap below. On tonight’s episode, Chaos from the lingerie party continues as Dorinda Medley confronts Ramona Singer, shocking Jules, the newcomer to the group.

On the last episode, Bethenny began planning a tailgate-chic BBQ birthday party to take place at her Hamptons home. Meanwhile, on the Upper East Side, Luann and Sonja bonded over sparkling rosé and their desire to settle down. Did you watch the last episode? If you missed it, we have a full and detailed recap right here for you.

On tonight’s episode as per the Bravo synopsis, “Chaos from the lingerie party continues as Dorinda confronts Ramona, shocking Jules, the newcomer to the group. The night heats up when John arrives at the party uninvited, ready for a showdown with Bethenny. As Bethenny and John go head to head, an embarrassed Dorinda decides it’s time to ask John to leave.

After the dramatic night, the ladies are excited for a relaxing weekend in the Hamptons to celebrate Bethenny’s birthday, but everyone seems to have a different perspective on the situation that took place between John and Bethenny. Dorinda agrees to go to dinner with Bethenny and Ramona in the Hamptons to clear the air, but it’s unclear if fences can be mended.”

This week on The Real Housewives of New York City Jules and Dorinda are outside smoking a cigarette and talking about the argument between Dorinda, Bethenny and Ramona. Jules says “I don’t know these women well, but it seems that Bethenny started it.” Dorinda is really angry that Ramona brought up the comments that John made.

Inside the party Ramona and Bethenny are discussing the best way to apologize to Dorinda. When Dorinda and Jules come back in Ramona apologizes to her and then she and Bethenny leave to go out on dates. Dorinda does not accept the apology and says “She shot me in a drive by shooting and then tried to hand me a band aid. I am not ok with that.” The ladies are sitting around talking and Jules reminds Dorinda that she is supposed to stay at Ramona’s house for the weekend to attend Bethenny’s birthday party. Dorinda says “There is no way that is going to happen. I live by the sword I die by and I refuse to eat off Ramona’s table after what she did to me.”

Just then Dorinda calls John to see if he is going to pick her up. She has him on speaker and the ladies hear him say “Tell those ladies who are talking smack about me… “ Dorinda quickly takes the phone off speaker and John hangs up. He then calls back and tells Dorinda that he is coming upstairs. When he gets up there he immeadiately lights into Bethenny about her business dealings. Dorinda is appalled by his behavior and she tells him “You need to leave .” John says “I am not going anywhere.” He continues to argue with Bethenny.

Dorinda is very upset and Jules and John finally leave the room. John tells her “I heard all the smack that they were talking about me. They don’t know anything about a relationship. They are all jealous.” Jules tells John not to give them any ammunition and he tells her “I am going to go downstairs and wait for my girl.”

Carole calls Sonja and asks her about the party after she left. Sonja tells her “You have no idea what happened after you left.” Carole says “I saw John coming in as I was leaving so I know that can’t be good.” Sonja agrees. Sonja asks Carole if she is coming to her birthday party that weekend. Carole tells her “I will be there. Is LouAnn coming?” Sonja tells her that she is and Carole seems upset. She says “LouAnn has had eight months to apologize to me for the things she said about me and she hasn’t. I am still upset about it.” Sonja tells her to relax and just come enjoy the party.

LouAnn is out apartment hunting with her Real Estate friend and agent. She looks at a beautiful apartment uptown. As much as she loves the apartment the agent convinces her to look downtown. Sonja wonders “Why is LouAnn even venturing downtown? She doesn’t ever go down there anyway so why would she want to live there?”

Bethenny is at work and asks her assistant about the protein shake event. The assistant shows her the space and she is impressed. Ramona meets with Bethenny and tells her “Dorinda texted me and says you were my safe place and I loved you.” Ramona tells her that she never meant to hurt Dorinda and she feels like she wants to cry.

Bethenny goes on to tell Ramona about what happened at the party after she left and John came bursting through the door. Ramona tells Bethenny “I have to make up with her because she is my friend.” The two women call Jules to get her take on what happened at the party. Jules is very evasive. When Bethenny asks her “Why don’t you just tell us what you think about what happened?” Jules tells them “It’s not my business.” Bethenny tells her “If someone talked to you like that you can best believe that I would come at them with my big stick.”After they hang up with Jules Bethenny tells Ramona “I had invited Dorinda and John over for dinner, but I am going to call her and tell her I don’t want him here and see if she will come over alone to talk to us.” Ramona thinks this is a good idea.

Dorinda and John are driving and discussing Ramona. Dorinda tells him “We are not going to stay at Ramona’s house, especially after what happened.” John says “Good I never want to stay at her house. Can you imagine what kind of dirty sheets she has at her house?” He continues to insult Ramona until Dorinda says “You keep talking I am going to close my eyes.”

Bethenny says “We need to sit down and have a calm dinner and clear up the mess in the room.” She also says “Selfishly I want her to break up with John, but this is a situation that can go a number of different ways. She can either say “I am going to break up with John, tell us to go screw ourselves because this is her relationship or this could be an apology.”

Michael and Jules are celebrating the jewish holidays. Dorinda and John show up and are impressed by the house. Dorinda says “I have to go because I have to see the witches of the Hamptons.” Jules and Dorinda are discussing the situation with Ramona and Bethenny. Dorinda says “I am going to tell them if you are not nice to me then I am not going to be your friend anymore.” Michael asks her “What do you want to get out of dinner with them?” Dorinda says “I want to drawn my line in the sand with them and let them know where I stand.” Dorinda tells them “I feel like Ramona betrayed me. She attacked me when she knew I was at my weakest and that hurts because she was supposed to be my best friend.”

In the Hamprons Ramona and Bethenny meet at the restaurant and wait for Dorinda. Ramona tells Bethenny that Dorinda was staying with Jules and Michael, rather than with her. Ramona says “Being a true friend means that there are no restrictions. I think Dorinda gets it, but she doesn’t want to get it and it’s frustrating.”

When Dorinda arrives she says “I came and I am ready for round two.” Bethenny confronts her about not staying with Ramona and Dorinda says “I didn’t think it would be comfortable for John.” Ramona asks if they are ok and Dorinda tells her “No.” She tells Ramona “John really doesn’t want anyone to know he uses Viagra. He thinks he is more verile than that.” Bethenny gets upset and tells Dorinda “I think you need to check yourself and apologize to me. “ Dorinda tells her “I am not going to do that.” Bethenny gets more heated and tells her “Your boyfriend had no right to be in that hotel room.” Dorinda agrees and apologizes for him showing up the way he did. Then she tells them “Maybe we need to have a relationship where I just see you guys on my own because I have had enough negativity to last a lifetime.” Bethenny tells her “I thought you would have broken up with him.”

Dorinda says “Well I didn’t. It’s my choice and this is who I choose, so let me figure it out.” Bethenny says “Dorinda has drank the Kool Aid. She is in the cult and we are not getting her out.” Dorinda starts to cry and Ramona gets up to hug her. She tells Dorinda “I’m sorry, I never meant to hurt you and I don’t want to see you in pain.” Dorinda tells them “I love him. Even when we have broken up for a week I miss him and I don’t know what to do with it.” Bethenny says “I understand that. Just make sure that you do what’s best for you.” Dorinda says “I think Ramona realizes what she did, but I’d be lying if I said everything was all good again.”