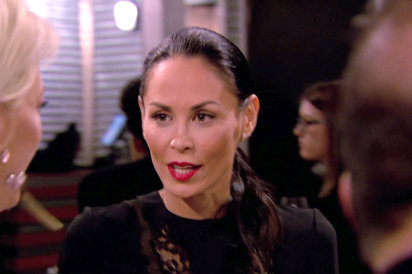 The Real Housewives of New York returns to Bravo tonight with all new Wednesday, June 15, season 8 episode 11 called, “Invitation Interrupted,” and we have your weekly RHONY recap below. On tonight’s episode, still dealing with the fallout from her Tipsy Girl venture, Sonja Morgan decides to change her partying ways.

On the last RHONY recap, the saga in the Berkshires continued with round two of Bethenny vs. Luann. Back in the city, Jules had to adjust to life without a nanny. Did you watch the last episode? If you missed it, we have a full and detailed recap right here for you.

On tonight’s episode as per the Bravo synopsis, “still dealing with the fallout from her Tipsy Girl venture, Sonja decides to change her partying ways. Her roommate, Luann, has a surprising announcement of her own: She’s found love with someone the ladies are familiar with. Bethenny invites some of the women on a trip to Mexico, but divides the group as they vote on who should or shouldn’t come.

Carole gains a new perspective on her life after fostering a kitten. On a double date with Dorinda and John, Jules hits a boiling point with Michael, and, Bethenny has a conversation with Luann that leaves her speechless.”

Tonight’s episode is going to be filled with the usual Housewife drama and you won’t want to miss it, so be sure to tune in for our coverage of the show tonight at 9 PM EST! While you wait for our RHONY recap hit the comments and let us know how excited you are about the new season of “The Real Housewives of New York!”

On this weeks episode of The Real Housewives of New York City Sonja and LuAnn are at Sonja’s apartment talking. LuAnn tells her “You need to make up with the girls, especially Bethenny.” Sonja scoffs and says “Bethenny doesn’t want anything to do with me because of my Tipsy Girl venture.” LuAnn tells her “If it’s going to cost you a friendship with the girls why would you keep going down this road?” Sonja asks her “Why do the girls have to be involved in my business?” LuAnn tells her “The girls are all in tailspin with all of this.”

Sonja says “I quit. I am going to quit drinking.” LuAnn is shocked by this but she moves on to tell Sonja “I’m moving out.” Sonja is shocked. LuAnn tells her “I am moving in with Tom and we are getting married. He is my soul mate.” Sonja says “Tom? My Tom?” LuAnn says “Dorinda introduced us. We kept missing each other, but we finally went out and have been inseperable every since.” Sonja is shocked because she and Tom had been seeing each other up until a month ago.

The ladies meet up and Bethenny tells them that she is looking to add a new flavor to her Skinny Girl collection. She tells them “I want to go to Tequilla, Mexico. I want all of you to come with me.” Everyone is excited. Bethenny says “I want to go on a high end tequila tasting tour with all of you.” Carole says “I hate to put a damper on the conversation but are we inviting LuAnn and Sonja?” Bethenny says “I don’t know. I think we need to talk about this.” Carole says “I don’t want to be on another vacation where LuAnn is the center of attention.” The debate continues and eventually Carole says “I’m not going if LuAnn goes.” Bethenny responds and says “I’m not going if you don’t go.” Eventually the ladies put it to a vote and it is decided that niether LuAnn or Sonja will be invited on the trip.

Carole shows up at Bethenny’s apartment and they are talking about their holiday trip to the Bahamas. Carole says “It’s nice to date someone nice and busy. I don’t want them in my apartment living off my money.” Carole tells Bethenny about her new foster kitten. She was sad because when the cat went back to the shelter for its shots a family decided to adopt him. She tells Bethenny “I called Adam and I was sobbing and that was when I realized that I can’t love anything unless it’s temporary.” Carole says “I owe this kitten a lot. It taught me that you can’t live life as if it’s temporary.” Carole tells Bethenny “I love Adam and we are happy together.” Bethenny says “You can’t get out of a relationship and I can’t get into one.”

Sonja and Dorinda meet up to talk about the situation with the girls. Dorinda tells her “I think Ramona has decided to take your side because it is what’s best for her.” Dorinda tells her “No more Ramona and Sonja. It’s Sonja Morgan period.” Dorinda reveals the trip to Mexico to Sonja. She tells her “I don’t know if you and LuAnn are going to be invited to be honest.”

Sonja feels shocked when she hears this news. Dorinda says “Bethenny is feeling so much pressure from all sides and she wants you to be ok.” Dorinda says “I think the biggest issue is this Tipsy Girl thing. I think you need to go to Bethenny and apologize and say I’m done with the Tipsy Girl thing.” Sonja asks her “How can I just ignore a contract I have with my partners? They are counting on my brand. I can’t just tell them forget about the contract because my friend’s feelings are hurt.”

Carole and Adam are working on the cookbook together. Carole says “I can’t say that we have had an easy time, but we have developed a rhythm. Whether or not the rhythm turns into a cookbook will be hard to say.”

Ramona is working on her website with her personal assistant. She is looking into developing a line for hair. While she is working LuAnn shows up. While she is there testing out the new hair extensions Ramona asks her “Have you texted Bethenny and Carole?” LuAnn tells her “I think I have gotten over the hump with both of them. Things seem to be better.” LuAnn tells Ramona “I had a fortune teller come to my house and she told me that I would meet my soul mate in the next two weeks. Then I met Tom and he wants to marry me.” Ramona is shocked. She tells her “He calls his ex every day and tells her he loves her. He gave her a gold bracelet for Christmas.” LuAnn can’t believe what Ramona is saying. She tells her “I don’t believe you. I think you are just trying to burst my bubble.” Ramona tells her “I’m happy for you.” LuAnn says “I’m so glad to hear you say that.” Ramona goes on to say “I just thought you should know so you can be guarded with your feelings.”

Jules and Michael are headed out for a night on the town. She is upset because they are running late. Jules and Dorinda are talking and Jules tells her “I came home last night to two kids in dirty diapers.” Dorinda tells her “Don’t ever think that marriage is always going to be 50/50. Sometimes it’s 70/30 or 80/20.” Jules says “I never take a girls vacation. If I want to he should step up.” Dorinda tries to talk to Michael and Jules breaks in to explain “I told Dorinda about you always being late. That’s why she is talking to you like this.” As the night wears on Dorinda drinks more and goes a bit off the rails. She says “Never drink and try to give out marital advice.” John says “We are all going to have a great 2016.”

LuAnn meets with Bethenny. Bethenny tells her “I have been bleeding and the Dr. wants me to come in.” She asks LuAnn “How was the Hamptons?” LuAnn tells her “I have been with Tom for the last few weeks and he wants to marry me.” She tells Bethenny “I went to see Ramona and she tells me that Tom still calls his ex girlfriend and gave her a bracelet.I asked her why she would tell me that and why she couldn’t just be happy for me.” Bethenny tells her “I think she is happy for you. She just wants you to be careful.” LuAnn runs down the fact that Ramona dated Tom for a bit. Bethenny tells her “I’m happy for you really.” After a few minutes Bethenny tells her “I have to go. I don’t feel good.” Before she can leave LuAnn brings up the trip to Mexico. She asks Bethenny “Am I invited, am I not invited?” Bethenny says “I walked into this wine bar with every intention of inviting LuAnn to Mexico, but after spending a few minutes of talking to her I don’t want her going to Mexico. I’d rather spend time with an ogre.” Bethenny says “I don’t think I can talk about it right now. My brain is not turned on.” After a few minutes she tells LuAnn “I am doing a work trip to Mexico and I invited Dorinda, Jules, and Carole. I didn’t invite you because of the issues between you and Carole.” LuAnn asks her “What is Carole, Your life partner?” Bethenny says “Yes. I trust her and I want everyone to be happy.” LuAnn says “In that case yes I’d be happy to come,” LuAnn finishes her drink and tells Bethenny “I got the next one. Thanks for the drink. Feel better.” Then she leaves. Bethenny is stunned.