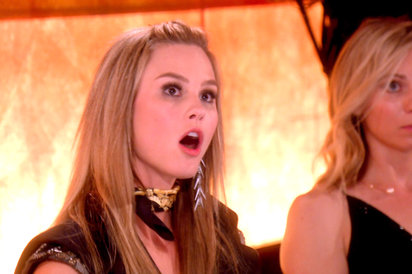 On the last episode, in the wake of all hell breaking loose at Shannon’s 70’s party, Shannon headed to Dr. Moon to try a new remedy to remove toxins. Did you watch the last episode? We’ve got your detailed The Real Housewives of Orange County recap right here.

On tonight’s episode per the Bravo synopsis “while Vicki revels in the return of her family to Orange County, Heather strives to find a work/life balance on the eve of her book launch. Kelly struggles to figure out Shannon’s motive for setting her up and bonds with Vicki over their shared anger. Tamra plans a last hurrah for Meghan before she gets pregnant, but the sushi party goes off the rails when Kelly loses her cool and crosses a line.”

On this weeks episode of The Real Housewives of Orange County Tamra and Kelly are talking about the plans for the party to celebrate Meghan’s IVF treatments. Kelly mentions the meeting between her and Shannon. Kelly tells her “Shannon is just not my type of girl.” Tamra tells her “Shannon is a different type of girl, but she is really good at heart.” Tamra asks her “What did happen the other night?” Kelly tells her about the incident. Tamra asks her “What would Shannon get from doing something like that?” Kelly says “I don’t know, but deviance begets deviance and it is going to come back on her.”

Brianna is stressing over renovating the house that Vicki bought for her. Vicki is there having lunch with her and the boys. Vicki says “I have to find a new husband to do stuff with.” Brianna laughs. Vicki says “I want someone younger to travel with.”

Meghan calls Tamra and Tamra asks her about the guest list. Meghan tells her “I don’t want Vicki there. Just because we shared a moment at a party doesn’t mean I want her at the party.” Tamra is frustrated. She says “Just a couple days ago Meghan was telling me to invite her and now she tells me she doesn’t want her there.” Meghan tells Tamra “I don’t even want the party. I just want to go home and go to sleep.”

Tamra reassures her “We don’t have to cancel the whole party just because you don’t want Vicki there. I will just call and uninvite her.” That seems to appease Meghan and Tamra hangs up still frustrated.

Heather has just arrived home from Washington D.C and now she is back to work again. She is feeling frustrated. She tells her assistant “I just want to go home and hang out with my kids and sit on the floor with them.” She is co hosting an episode of The Drs. She is feeling stressed, but she has managed to find the balance between work and family and is frustrated that Terry has not.

Meghan goes to see a Dr that Shannon recommended about her bloating and the other issues she is having with her IVF. She says “Even though I am not a fan of holistic medicine I will do whatever it takes to make me feel better.” Tamra and Meghan are talking about inviting Vicki to the party. Meghan says “I know when we talked the other day I was overly emotional and I was a little irrational. I just didn’t expect you to invite VIcki.” Tamra asks her “What did you expect?”

Shannnon is upset when she hears that Vicki is coming to the party. Tamra tells her “You invited her to your seventies party.” Tamra tells her “You can’t shame others for doing the same thing you did.” Shannon tells Tamra “It’s different because you are talking to her and texting her and persuing a friendship with her. She lied about Cancer and that is one thing I can’t forgive.s Tamra fires back and tells Shannon “I am a very strong girl and i am not going to let anyone tell me what to do.”

Shannon calls Tamra and informs her of the situation. Tamra doesn’t react the way she expects her to. Instead she says “You have to understand Kelly feels like she was set up.” Shannon says “If you want to believe it that’s fine.” Tamra tells her “I didn’t say I believe it. I’m just saying that I don’t have a problem with Kelly. This issue is between the two of you.”

The night of Meghan’s party everyone arrives and the air is thick with tension between Meghan and Vicki, Vicki and Shannon and Shannon and Kelly. Everyone is sitting around the table talking and the possibility of Meghan having twins comes up. Meghan says to Kelly “I don’t see why you want me to have twins when you only have one.” Kelly says “I put twins in and only one came out.” Meghan asks Kelly about the incident between her and Shannon.

Kelly says “It was fine, but I don’t like her friends. I don’t have friends like that.” Kelly says “Can you imagine working hard your whole life and someeone calling you a prostitute?” Shannon rolls her eyes and says “Here we go again.” Kelly turns on her and says “I have workeed hard my whole life, I am college educated and for someone to call me that is disgusting.” Shannon says “I have never said I was college educated. That’s interesting I wonder why you would say that.”

Kelly completely loses it and calls Shannon a pretty disgusting name that shocks the whole table. Tamra turns on her and tells her “If you’re going to talk crap you have to be able to take crap.” Heather gets very angry and tells Kelly “I am not going to take this. Kelly I think you are a very good person at heart but you need to leave.” Everyone else decides to leave instead.

Heather is very upset. She tells Vicki “As much as I love this one i told her that the way that David spoke to you was wrong and the way that Michael spoke to you was wrong, but you need to own your own stuff and apologize for the things you did.” Vicki says “I have.” Heather says “No you didn’t.” As the party continues to break up Shannon talks to Tamra about her relationships with both Kelly and Vicki. She tells her “I see you getting hurt if you put yourself back in that place with Vicki.” Shannon also says “When I look into Kelly Dodd’s eyes i see pure evil.” Tamra tells her “That’s pain.”

Kelly is sitting at the table making fun of Heather. Tamra asks her “Do you not like Heather?” Meanwhile Heather is on her way home in the limo. She is on the phone with Terry and crying so hard that Terry can barely understand her as she explains what happened at the restaurant.