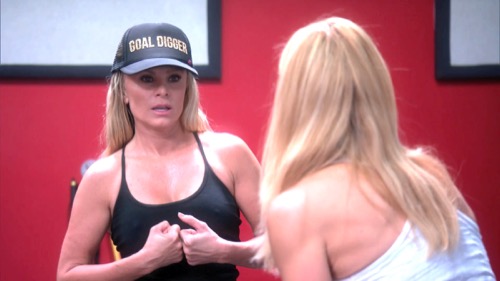 Tonight on Bravo TV the original housewife series, The Real Housewives of Orange County returns with an all-new Monday, September 19, 2016, episode and we have your RHOC recap below.  On tonight’s season 11 episode 12 called, “Stage Moms and Dropped Bombs,” friends and family gather to watch the Beador girls perform.

Did you watch last week’s episode where the women tried to recover from the accident in Glamis and Tamra Judge returns intent on carrying on with the trip?  If you missed it and want to get caught up we have last week’s Real Housewives of Orange County recap, right here for you!

On tonight’s RHOC episode as per the Bravo TV synopsis, “Shannon panics about her families’ impending move, while her daughters prepare for an upcoming rock show. Vicki celebrates Briana’s birthday and makes it uncomfortably clear she is ready to fill up her love tank. The ladies come over to help Shannon purge her outdated closet; however, tensions run high over unresolved issues between Shannon and Kelly, as well as Tamra and Meghan. Friends and family gather to watch the Beador girls perform, but Shannon’s night is rocked by a shocking allegation from an uninvited guest.”

On this week’s episode of The Real Housewives of Orange County Tamra is back in the gym working toward her competition. After she finishes her workout she tells Mia “I am heading over to Shannon’s. She finally sold her house. Meghan is going to be there. The last time I talked to her I told her to go to hell.” Mia tells her “Be positive. Don’t be that angry, negative person.”

Shannon is watching her daughter’s practice for their weekend gig. She tells them “You guys sound flat. If you are going to play rock n’ roll then really get into it.” The girls then tell her “We are so tired of this.” Shannon says “I am their manager. They just don’t know it. Otherwise I’d be fired.”

Vicki finally hears Shannon’s message, but decides not to call her back. Tamra calls Kelly to let her know that she is being invited to Shannon’s house to help with her move. Kelly says “Do I need to bring anything?” Tamra tells her “No. Just come and help out and be with us. Extend an olive branch to Shannon.” Kelly agrees. Tamra says “I have become like the Rodney King of Orange County. Can’t we all just get along?”

Brianna is checking on Vicki. She asks how she is doing. Vicki tells her “I went to see a Chiropractor and an acupuncturist to help with the pain. They are also celebrating Brianna’s birthday. Ryan is able to make it home to be with her. She and the kids are super excited to see him.

Shannon is feeling the stress of the move. She is worried because she hasn’t packed or purchased any furniture for the new house. Tamra and Kelly are the first to arrive. Shannon says “One would hope that Kelly wouldn’t attack me in my own home, but am I worried? Absolutely.” Kelly tells her “I just wanted to come over here and say I’m sorry for everything that happened.” Shannon accepts her apology.

The ladies move through the house packing and cleaning out the closets. They are still hard at work when Meghan arrives. Tamra is still upset that Meghan called her reckless.  Shannon invites Kelly to come see her kids play. Then the conversation takes a serious turn…

Tamra says “I’m going to leave since everyone seems to want to talk about this, but not with me.” Shannon says “I just thought that you guys could resolve things.” Tamra says “I have heard that you have been telling people around town that I am reckless and that is why the accident happened?” A short argument ensues and Tamra says “Sorry I told you to go to hell and hung up on you.” Meghan accepts the apology, but she still feels that she is being scapegoated.

Vicki goes out to dinner to celebrate Briana’s birthday with her son, daughter and Ryan. While out to dinner Vicki asks them what they think she should do about Shannon’s message. Brianna tells her “It was nice of her to call. I don’t think you should ignore it.” Vicki is talking to her children about Tinder. Briana tells her “Don’t act like you know about Tinder.” Vicki tells them “I want to find someone to travel with. I want to have sex again.” This remark disgusts her children and her son tells his nephew “Cover your ears Troy.” The little boy just shakes his head.

On the night of her daughter’s performance Shannon is acting like a real stage mom. The girls beg her to stop taking pictures of them. Kelly, Shannon and their husbands are having a great time socializing when Tamra and Eddie show up.  All of a sudden David’s mom and sister show up. Shannon is less than thrilled to see them.

The show begins and the girls do a wonderful job performing. Shannon says “I’m just so proud of my kids.” As the girls are receiving congratulations David’s mom and sister walk over to Kelly and Tamra and start talking to them. She tells Kelly and Tamra “He’s a wonderful man. He made one mistake and she pushed him to it.”  Tamra and Kelly are both appalled. Donna says “I’m sure he regrets it now.”

Everyone goes in to enjoy food and drinks after the performance and Meghan and Tamra continue to try and make peace. Tamra says “I’m over it. Done. Let’s move on and we never have to talk about it again.” Shannon is talking to Kelly about the situation with David’s mom and sister. Tamra leans over and reveals what she said to her and Kelly. When Shannon hears this she absolutely loses her cool. She says “I’m done.” and storms away from the table. David goes after her. Shannon tells him “What I need you to do is to tell the truth. Are you going to defend me, or defend your mother?” Shannon reiterates the statement. David says “You didn’t push me to have an affair.” Shannon says “This was supposed to be about my kids tonight and for your mother to come in here and say things like that is just completely wrong.”

Everyone is leaving. David is trying to explain to his children what happened. He tells them “They said some things that weren’t true about your mom.” One of the girls says “It they say mean things you should forgive them.”  Shannon says “I have done nothing but preach forgiveness for your aunt and grandma.”