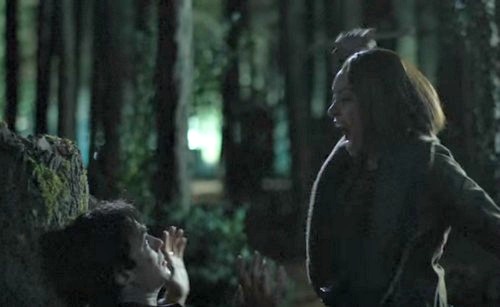 “The Vampire Diaries” spoilers for Season 7 Episode 21 reveal that Bonnie Bennett (Kat Graham) wakes from her life force transfer with Rayna Cruz (Leslie-Anne Huff) to a horrifying outcome. Rayna pulled a fast one on Damon Salvatore (Ian Somerhalder) and made Bonnie a vampire killer. Watch out for Bonnie!

Paul Wesley directs this next to the last episode of The Vampire Diaries Season 7 and it is absolutely action packed. Given that most of Bonnie’s BFFs are blood suckers, her waking as a vampire hunter cursed to kill is not a good move for her close pals and her boyfriend Enzo St John (Michael Malarkey).

When next week’s episode of The Vampire Diaries opens, Bonnie will still be conked out, but Damon cautions Enzo that “when she wakes up, your relationship is officially on the rocks.” No truer words were ever spoken! Bonnie comes out of it with a thirst to kill and snaps Enzo’s neck without blinking.

Stefan Salvatore (Paul Wesley) warns Caroline Forbes (Candice Accola) that she’s first on Bonnie’s hit list. Bonnie makes a creepy call to her BFF and tells her she’s marked and she’s coming for her. Bonnie shows up at Caroline’s house that she shares with Ric Salzman (Matthew Davis) and taunts her bestie.

Bonnie will ask if her daughters knows she’s a vampire and then gut stabs Caroline. Will Caroline survive the attack? Damon doesn’t want Bonnie to bear the burden of killing Caroline and it looks like he’ll lure her away to chase him down instead saying “catch me if you can.”

Matt Donovan (Zach Roerig) tries to help save Caroline – as a mortal, it seems like he’d be slightly safer from Bonnie, but you never know. The whole gang unites to try and keep Bonnie from killing any of them, but they may not be able to counter the powerful hunter magic that Bonnie now has.

Plus, we have to consider that Bonnie just got that Tribal magic on top of her powerful Bennett mojo, so it seems like she’s a vampire hunter extraordinaire. Bonnie will have the chance to take out Damon and he begs her to forgive him as she prepares to stake him.

The Bonnie drama won’t end on this episode, though, there’s much more to come. Can Bonnie get her killer instinct under control – or is it too much for her? Plus, since Bonnie has just one life unlike Rayna’s many, Damon won’t kill Bonnie, but how can he quell her murderous rage?

Be sure to check back with CDL for a live recap of the Friday May 6 episode of “The Vampire Diaries” and share your comments below!