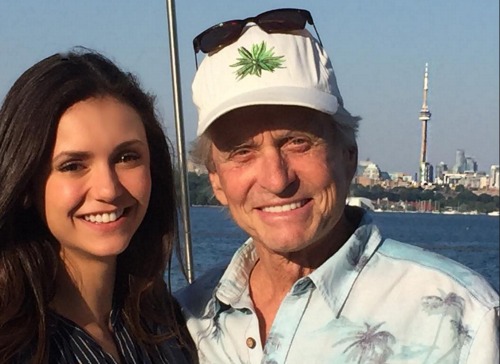 ‘The Vampire Diaries’ season 8 spoilers include confirmation from CW President Mark Pedowitz that the network is in talks with Nina Dobrev. It is expected that between Pedowitz and showrunner Julie Plec something can be worked out with Nina Dobrev.

This latest development must have Ian Somerhalder beyond furious. Ian made no secret of the fact that Nina isn’t welcome back – at least not by Ian – for the final season of ‘The Vampire Diaries.’

Pedowitz confirmed the negotiations with Nina at the Television Critics Association summer tour. Now it’s official, the president of the network doesn’t care, showrunner Julie Plec doesn’t care, no one cares about Ian’s needs or wants. All anyone is interested in is Nina Dobrev back on set for ‘The Vampire Diaries’ series finale.

Before TVD fans get too excited, network president Pedowitz wants to make it clear that right now all Nina is doing is talking to TPTB, there is no guarantee Elena will be return to Mystic Falls to wrap up the series.

There is a B-plan in place just in case Pedowitz and Plec aren’t able to convince Nina that it’s absolutely necessary for the actress to return.

During the TCA tour the CW executive told reporters that if negotiations with Nina fall apart Plec has a phenomenal series finale planned and TVD fans will be happy with the conclusion of the series.

Ian Somerhalder made it very clear he doesn’t want to work with Nina and the actor is at war with executive producer Julie Plec about the situation.

Comic Con 2016 in San Diego was the setting for the showdown. Plec was nearly begging Nina to return for season 8 of TVD, talking about emotional promises that had been made.

The showrunner’s public pleas to Nina upset Ian and he snapped at Plec, saying, I thought we had this conversation about that, apparently not.” Maybe Ian was having a conversation, obviously the executive producer wasn’t listening.

Someone else who isn’t listening to Ian Somerhalder’s demands that Nina Dobrev not be included in the final season of ‘The Vampire Diaries’ is CW President Mark Pedowitz. There’s a dialogue going on between Nina’s people and the CW and there’s nothing Ian can do about it. Come back to CDL for all your The Vampire Diaries spoilers and news!

Don’t forget about me! @ellenpage #MadeInCanada …..Well, kind of. #BulgarianBornCanadianRaised