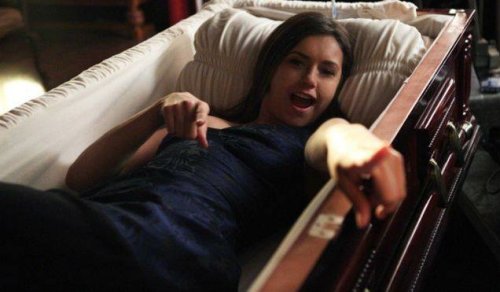 The Vampire Diaries Season 8 spoilers are trickling in and there is talk that Nina Dobrev will return and Ian Somerhalder could exit. Has Dobrev agreed to return to bail out the flagging CW show on the condition that Ian Somerhalder leaves? Is there a behind-the-scenes deal between Nina Dobrev and showrunner Julie Plec that could take out the character of Damon Salvatore for good?

If the rumors are true and Nina Dobrev is back for Season 8, she might just be the next Big Bad villain on TVD. Remember, on The Vampire Diaries Season 7 finale, Damon went into the vault under The Armory and encountered the ultimate evil that had been entombed there.

You’ll recall that Damon heard Elena’s voice and called out her name and there was something in the cavern with him. The last we saw was a flash forward to Damon and Enzo St John (Michael Malarkey) with a warehouse full of bodies strung up by their feet and with their throats sliced.

They seem to be enjoying themselves. We also saw Stefan Salvatore (Paul Wesley) tell Bonnie Bennett (Kat Graham) and the others that they’ll get them back and the trail of bodies are not their fault, no matter what’s going on.

But what may be going on is the influence of something that looks like Elena Gilbert but is not Elena nor a doppelganger. The real Elena is still linked to Bonnie by the heretic spell, so she’s safe in a coffin in a storage locker.

But that doesn’t mean that Julie Plec hasn’t found a way to bring Nina Dobrev back. Could the terror in the vault have manifested itself to resemble Elena? We saw in flashbacks that the evil in the vault tapped into the mind of the person affected and drew out memories of a loved one.

With Damon, that would obviously be Elena. So did the evil make itself look like Elena and she’s the one controlling the guys? That would be the solution to avoiding the conflict of having to kill off Bonnie in order to resurrect Elena.

There have been so many doppelganger plots on TVD, it wouldn’t be surprising if that’s the route Julie Plec went to bring back her favorite (and fans’ favorite) Nina Dobrev. But with Dobrev back in, according to rumors, does that mean Ian Somerhalder is out?

He already indicated that Season 8 would be his last, but that doesn’t mean The Vampire Diaries can’t rock on without him. In fact, since Season 7 ratings dropped after Nina Dobrev’s exit, it would be a fab revenge if she could carry Season 9 of TVD without her ex-boyfriend.

What do you think fans of The Vampire Diaries? Has Julie Plec found a way to bring back Nina Dobrev as someone or, more aptly, something other than Elena? Kat Graham has also said she’s not returning after Season 8, so they can kill off Bonnie in that finale and resurrect the real Elena.

There is talk that Season 8 is the end for The CW show, but if Nina Dobrev’s presence revives the ratings, it seems likely that the network might want to go for Season 9 so long as Nina Dobrev is on board.

Let’s hope the rumors are true and we’ll see Nina Dobrev back when TVD returns this Fall on Friday, October 21, 2016, on The CW. Check back with CDL often for more The Vampire Diaries spoilers and news.