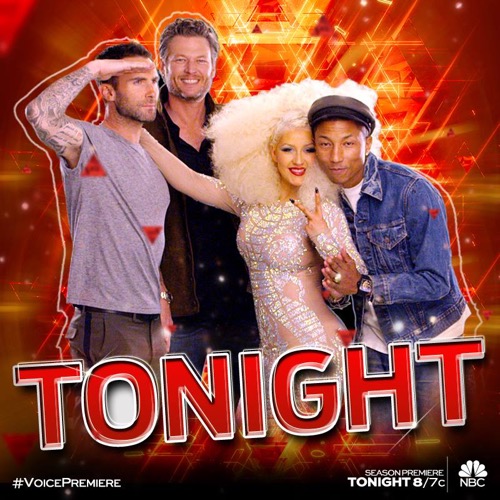 Tonight on NBC the Emmy award winning music competition The Voice continues with an all new Monday February 29, season 10 premiere called, “The Blind Auditions Premiere,” and we have your weekly recap below. On tonight’s episode blind auditions are held in the Season 10 premiere. The judges are Adam Levine, Blake Shelton, Christina Aguilera and Pharrell Williams.

For those of you who don’t know, the show is about singers that square off for a coveted recording contract in this reality talent contest from the producers of “Big Brother” and “Survivor.” Four vocal coaches mentor the contestants in three distinct competition phases: the blind auditions (during which the coaches can’t see a contestant and thereby judge them solely on their vocal talent); the battle phase (in which the contestants are advised and developed); and, lastly, the live-performance phase.

On tonight’s episode as per the NBC synopsis, “in the season premiere, the “blind auditions” are held in front of the celebrity panel of musician coaches, including Christina Aguilera, Adam Levine, Blake Shelton and Pharrell Williams, who each pick vocalists for their individual teams. The strongest vocalists from across the country compete to be selected by one of the coaches and fight for a chance to win the title of being named “The Voice.”

Tonight’s season 10 premiere is going to be exciting. We’ll be blogging it right here for you. In the meantime hit up the comments section and tell us your thoughts on season 10 of The Voice so far.

#TheVoice is back for Season 10. It’s blind auditions night one. The #VoicePremiere starts with introductions of Adam Levine, Christina Aguilera, Blake Shelton and Pharrell Williams. Paxton Ingram from Miami is first up. The hip hop teacher is singing Dancing on My Own by Robyn.

Blake is first to turn. Blake curses as Pharrell and Adam turn at the last moment. Blake says he recognized true greatness quickly. Adam mocks him for doing aww shucks. Blake is stunned when he’s able to sway Paxton to his team. Pharrell and Adam are stunned. Blake comes over and taunts Adam then moonwalks in his cowboy boots.

Adam says he hates him so bad. Adam calls him hillbilly Shrek. Caity Peters is next. She does amazing volunteer work and has chosen Jealous by Labrinth. Christina and Pharrell turn almost immediately. Adam and Blake turn before she ends as well. That’s a four-chair turn! Pharrell runs to hug her as Blake yells at him to stay away from her. Then he waves to her family as Christina yells she picked 1st.

Christina says she’d love to hold her hand to the finish line. Pharrell woos her as does Adam. Blake does a great pitch to close it out. Caity goes with Pharrell. Adam is dismayed. Next is Nick Hagelin from Atlanta and he’s a former ballet dancer who talks about his physically disabled son. Nick sings Lost Stars by Adam Levine. Christina is first to turn.

Blake and Pharrell race to turn at the last second and Christina is furious because she thought she had him all to herself. Christina says that’s messed up. Nick calls Pharrell the Quincy Jones of his generation and says he has to go with him. Pharrell goes up to greet him and say hi to Bash, his son. Christina says he didn’t say one word and still got him.

Next up is Maddie Poppe who is 17 and a joker. She makes YouTube videos and plays at local events around Iowa. She sings Dog Days Are Over by Florence + The Machine. Her voice is huge but she gets no chair turns. She sounded a bit pitchy. Mary Sarah from Texas is next and she works at Boot Barn selling cowboy boots.

She sang with the Oakridge Boys and sang with Dolly Parton and did a duets album. She says country music is hard for a girl. She sings Where The Boys Are by Connie Francis – a big classic. Adam is first to turn. Blake and Pharrell turn too. Christine turns at the last minute too. She got a four chair turn! Adam says he loved she did that so purely and different.

He says it was consistent and powerful. Pharrell says it’s a great song choice and says don’t believe anything Blake says. Blake says he’s heard of her and says he knew she was from Houston. He says she sounds like she’s from that era. He says let’s go to the Grand Ole Opry in Nashville. He says the others don’t know the Oaks. Mary goes with Blake of course. Blake sings Where the Losers Are.

Carson Daly goes to talk to Mike Schiavo at his job in LA. He says he told his parents after high school, he was skipping college in favor of music. Mike sings Talking Body by Tove Lo. Pharrell and Adam turn almost immediately. Blake turns and says he’s special. Adam takes the stage with him when he says he’s a big Maroon 5 fan. Mike plays guitar and Adam sings She Will Be Loved with him.

It’s amazing. The other coaches give him a standing O. Adam says he was nervous he would screw it up and says Mike is effortless and a natural. Pharrell says if he got amnesia after that, who does he wants. Mike says he wants someone who will teach him something new. Blake interrupts and starts his shtick. Christina says time to choose. He goes, of course, with Adam. Adam is so excited and goes to hug him and says it’s the right choice.

Next up is Queen Sessi who talks about how being an Uber driver in LA has helped her focus on her music. She does Show Me Love by Sam Feldt. Her voice is amazing from the first note. No one turned. Why? Christina says she’s awesome and says the opening note was crazy.

Christina says she wanted to hear something different and says she’s bummed. Adam says he wants to see Blake in her outfit. Blake says he’d look great and Adam says that’s not true. Blake says come back and do something with more finesse. Blake thinks she needs to dial it back.

Next up is Bryan Bautista who auditioned last season but he struggled and didn’t get any chairs. He was nervous. He does The Hills by The Wknd. Christina turns when he’s almost done. Blake turns at the last moment and Christina yells no at him. Blake says that’s country right there and says he’s got a hat on and boots.

Christian says she believed in the greatness. She wasn’t here last season but Pharrell remembers him and says he and Adam gave him good feedback. Blake tries to turn him to him but Christina says she wants him and Adam tells him to go with Christina. He chooses Christina and he says he’s happy that he came back.

Next up is Abby Celso who performs with a Motown band called the Swooners. She talks about losing her mom to cancer last year. She does Should’ve Been Us by Tori Kelly. Pharrell and Adam both turn and Blake encourages her to take Pharrell. Pharrell tells her about what he did for Sawyer and says he’ll stand behind her and knows she has it. She goes with Pharrell.

Next up is country boy John Gilman who lives without WiFi and TV. He sings Don’t Be Cruel by Elvis after talking about how he likes classics. Adam turns for him. He’s the only chair and is pleased. He’s from the sticks of New Jersey. He says he does Rockabilly, Doo-Wop and stuff like that. Blake says he’s stupid he didn’t hit his button and Adam says he’s glad he didn’t.

The next artist is former child star and Broadway star Alisan Porter who says she struggled with addiction but has been clean eight years and now is a stay at home mom to two kids. She starred as the little kid in Curly Sue. She does Blue Bayou by Linda Ronstadt. She gets three turns almost instantly then Christina turns shortly after.

Her upper register is amazing. She slayed that song. All four judges are on their feet as she finishes and the crowd goes wild. Adam heads for the stage and everyone tells him to sit down but he goes and kisses her hand. Christina goes to hug her and says bring it home then sits down by her. Blake says that disqualifies her.

Christina says when she’s there, Blake doesn’t run things. Christina takes her chair and says she worshiped her. Both she and Christina were on Star Search. Blake asks what movie she was in. Blake says she’s going to have fun on this show and he’s the most fun. Pharrell says he’s playing dirty. Christina wipes away tears.

Pharrell says her singing is eloquent and he wants her. Christina says she respects her and plays the mom card. Adam says it was the most flawless thing he’s heard in his life and says she’s going to win this. They all beg for her to choose them but Alisan chooses Christina. Christina says the have to win this.