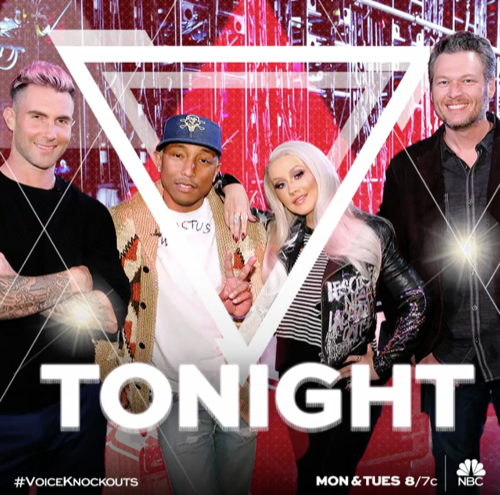 Tonight on NBC the Emmy award winning music competition The Voice continues with an all new Tuesday March 29, season 10 episode 10 called, “The Knockouts Premiere, Part 2,” and we have your weekly recap below. On tonight’s episode the knockout round continues with the artists selecting their own song to perform. Miley Cyrus serves as key adviser.

On the last episode, the “knockout rounds” began with coaches Christina Aguilera, Adam Levine, Blake Shelton and Pharrell Williams’ strongest team members remaining from the battle rounds. The artists were paired against a teammate once more, but this time they had to each select their own song to perform individually, while their direct competitor watched and waits. Did you watch the last episode? If you missed it we have you covered with a full and detailed recap right here for you.

On tonight’s episode as per the NBC synopsis, “the “knockout rounds” continue with coaches Christina Aguilera, Adam Levine, Blake Shelton and Pharrell Williams’ strongest team members remaining from the battle rounds. The artists will be paired against a teammate once more, but this time they will each select their own song to perform individually, while their direct competitor watches and waits. Music phenomenon Miley Cyrus will serve as a key adviser.”

Tonight’s season 10 episode 10 is going to be exciting. We’ll be blogging it right here for you. In the meantime hit up the comments section and tell us your thoughts on season 10 of The Voice so far.

#VoiceKnockouts starts with Blake Shelton as the only coach left with a steal. And Miley Cyrus is back as mentor to the artists. There’s a Team Blake knockout up first of Adam Wakefield vs Peyton Parker. Peyton has chosen Traveling Soldier by the Dixie Chicks and Blake says that’s tough.

Blake isn’t sure it’s a good choice then changes his mind. Miley has a great suggestion on where she can find a high note to show off. Adam has chosen Sam Cooke’s Bring It On Home. They give him some performance notes since he’s awkward without his guitar.

Now it’s knockout time. Adam is up first and Christina says he has a sexy voice and she’s crushing on him. The judges seem to all dig it. He hits a big growly note that drives the audience wild. Pharrell is on his feet as Adam finishes and so is Adam Levine. Wow.

Peyton is up next. Adam tells Pharrell wow her tone is beautiful. It wasn’t as big as Adam’s but was beautiful. Christina tells Peyton that was pretty but she heard some nerves and it’s perfect for country. She says Adam has an inviting signature sound.

Pharrell says Peyton has a beautiful voice and could take her tone to pop music if she wanted. He says the crack happens to all of them. Then he says Adam is amazing and would give it to Adam for the win but Peyton is awesome.

Adam says Peyton was wonderful and it was her best performance. Adam says he has a platonic crush on Adam too and he’s a huge fan. Blake says Peyton’s voice is unbelievably beautiful and says Adam’s voice is dirty. Blake gives the knockout to Adam. No surprise there.

Next is Team Pharrell’s knockout of Moushumi vs Nick Hagelin. Moushumi is excited to meet Miley and tells her she’s singing New Americana by Halsey. They tell her to turn it up and change up the melody. Nick is next and he’s chosen Lost Without U.

Moushumi does a nice job and Nick blows up with his falsetto channeling Robin Thicke. Both were kind of oddball though which is what Pharrell likes on his team. Adam says Moushumi is amazing and has a beautiful voice but wanted to see another gear.

He says Nick engaged the crowd and says he missed some smoothness on the falsetto. Blake says Moushumi needed a moment to bust out her range. He says Nick is a natural performer and that pulls you in and would give it to Nick.

Christina says she loves Moushumi’s sound and likes the different song choice. She says Nick was a bit choppy at the beginning. She says Adam has never said that he wants to see someone dance like he did to him. She says it’s a tough choice.

Pharrell says he agrees and wanted to hear more from Moushumi and she has the chops to do more. Then he says Nick started out rough but then he smoothed it out and pulled in the crowd. Pharrell gives the knockout win to Moushumi. Christina says Nick didn’t deserve to go home yet.

Next is Team Christina’s knockout of Maya Smith vs Tamar Davis. Maya is singing No One by Alicia Keys. Miley says she’s a great singer and no one would know about the post office chick except for The Voice. Tamar has chosen Lay Me Down by Sam Smith. They both get notes to prep them for the knockouts.

Maya is up first doing her Alicia Keys cover. She does so well with it despite that it’s a hard song to do. Tamar is up next and has Pharrell on his feet and the crowd cheering by the time she’s done. Pharrell says Christina’s team is fireball after fireball.

He says Maya established the zone and that was her best performance yet. Pharrell says Tamar made the song her own. He says they’re like x-men. Adam says he didn’t know Maya had that range then says Tamar, damn.

Blake says Tamar has a timeless sound and is strong. He says Maya showed her range and surprised them all but would give it to Tamara. Christina says they made her proud. She says Maya owned it and elevated it and says Tamar murdered that song and made it hers. She chooses Tamar.