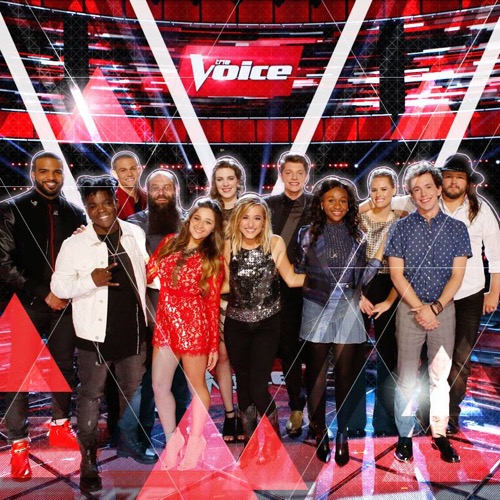 Tonight on NBC the Emmy award winning music competition The Voice continues with an all new Tuesday April 19, season 10 episode 17 called, “Live Top 12 Eliminations,” and we have your weekly recap below. On tonight’s episode top artists advance in a results edition, where the top 11 will be revealed.

On the last episode, the top 12 artists were Adam Wakefield, Paxton Ingram, Mary Sarah, Owen Danoff, Laith Al-Saadi, Shalyah Fearing, Emily Keener, Hannah Huston, Daniel Passino, Alisan Porter, Bryan Bautista and Nick Hagelin performed live in front of coaches Christina Aguilera, Adam Levine, Blake Shelton and Pharrell Williams for America’s vote. Carson. Did you watch the last episode? If you missed it we have you covered with a full and detailed recap right here for you.

On tonight’s episode as per the NBC synopsis, “America will vote to keep ten artists in the competition. The bottom two artists will compete for the Instant Save and one will be eliminated.”

Tonight’s season 10 episode 17 is going to be exciting. We’ll be blogging it right here for you. In the meantime hit up the comments section and tell us your thoughts on season 10 of The Voice so far.

#TheVoiceResults starts with a performance by Gwen Stefani of her new single Put Me Out of My Misery. Next the top 12 take the stage and Carson talks to them before they start announcing results. Bryan Bautista says he’s honored to be among them.

Emily tells Pharrell that he’s been a guiding force and has helped showcase her as an artist. Then Carson announces the first artist safe is from Team Blake  – it’s Adam Wakefield. Also safe is an artist from Team Christina – Alisan Porter.

After the break, Carson talks to Shalyah and she says the experience here has opened up another world for her. She says she learned so much from all her coaches. Carson then announces two more artists that are safe.

First up is from Team Christina – it’s Bryan Bautista. Also safe is an artist from Team Pharrell – it’s Daniel Passino.

Next is a performance by Team Blake – including Coach Blake himself of I Love a Rainy Night – nice choice of an Eddie Rabbitt hit from the 70s and they really did it jealous. Love that Adam Wakefield and Blake are playing guitar together. Very cool.

Carson asks Hannah about Pharrell and she says the best advice he gave her was his note to be more assertive in song choice and trust herself. Now we find out three more artists that are safe in The Voice results tonight.

There are five artists still at risk. Tonight is the first instant save. The instant save window is a short five minutes and you have to Tweet #VoiceSaveArtist with the first name of the artist you want to save.

So if Adam Levine was the artist (as an example), it would be #VoiceSaveAdam you tweet or retweet. You get one save vote per Twitter handle.

Next up is Team Adam with their coach singing Sly and The Family Stone’s If You Want Me to Stay. Funky choice… Owen and Laith rock the guitars on the number. Also love that Laith is rocking a man bun!

There are five remaining artists that now come out. Nick says if he’s safe tonight, he’ll showcase his tender side that Christina has encouraged and he wants to lighten it up. Now three will be safe now and two will be up for the instant save after they sing live.

Team Blake is completely intact and now Owen Danoff from Team Adam and Emily Keener from Team Pharrell must perform live for a shot at the instant save.

Emily Keener is up first and she sings Blue Eyes Crying in the Rain by Willie Nelson. Pharrell is on his feet clapping as she ends. It was very pretty. Christina says she can’t believe she’s in the bottom two since she blew her mind yesterday.

She says for her age, she has a raw natural gift and wishes she could play like her. She calls her a blessing to the show. She says Emily deserves to continue on. Pharrell says to Middle America, you know what you heard, this is a 17 year old singer/songwriter that can use this as a diving board.

Owen Danoff is next and sings Lego House by Ed Sheeran. It’s really cool. He gets major crowd love. Adam says he’ll throw himself on the fans’ mercy and says Owen won one of the hardest knockouts of the season and then he saved him last week.

Adam says he took a leap of faith with Owen and he keeps growing. He says Owen’s last performance was his favorite and says please do me a favor and give him the instant save. Adam promises that Owen will stick around if they do this for him.

Carson asks them for final comments in case they leave. Emily thanks Pharrell for his guidance, love and support. She says he taught her how to embrace herself as an artist. Owen says it’s been awesome working with Adam and he learned a lot about himself.

Pharrell says Emily is 17 and is doing what her parents instilled in her with a love of music and got a four chair turn. He says she’s a star then says both Owen and Emily are. Adam says it’s crazy they’re both four chair turns and are on the chopping block.

Adam says he hopes Owen is satisfied and doesn’t get wrapped up in all the crazy stuff happening. Adam says he loves to win and says it’s not always about winning and says he’s grown and evolved so much and it’s all a bonus from here on out.

The Instant Save went to Owen Danoff and Emily Keener is eliminated from The Voice Season 10.