The Voice Recap Final 20 and Backstage Antics: Season 11 Episode 14 “The Road to the Live Shows” 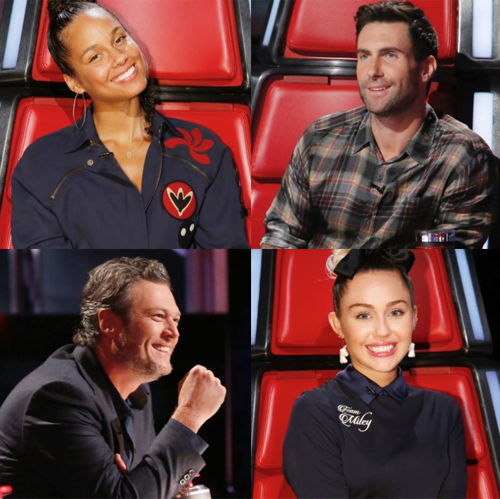 Tonight on NBC’s Emmy Award-winning musical competition The Voice airs with an all new Tuesday, November 1, 2016, season 11 episode 14 and we have The Voice recap right below.  On tonight’s The Voice episode, previously unseen footage of the coaches in action is aired.

Did you watch last night’s episode where The Knockout Rounds came to an end as the final set of artists were chosen for the live shows? If you missed the episode and what to find out what happened we have a full and detailed The Voice recap, right here for you!

On tonight’s season 11 episode 12 of The Voice as per the NBC synopsis, “Relive this season’s best performances.  Top moments from Season 11 are recalled as the journey of the Top 20 is chronicled.  Plus unseen footage will be aired on the road to the live shows.

#TheVoice tonight is the road to the Live Shows starting next week. The coaches talk about their teams of five that makes up the Top 20 going into Live Playoffs in coming days. Alicia Keys was new to The Voice this year but she says her team is magnificent and full of bangers.

We’ McDonald is on #TeamAlicia and she talks about being bullied a lot as a kid. Alicia says she wants to elevate We’s confidence and help her grow. Tim McGraw says We’ dropped his jaw to the floor in rehearsal.

She’s also got Kylie Rothfield and Alicia says she’s waiting to come out of herself. Kylie suffered a throat in injury and was worried about her performance. Alicia says she’s continually getting better and it’s amazing and she stands alone in her uniqueness.

Alicia’s next team member is Christian Cuevas whose father was a Puerto Rican singer with some fame and has now passed. Alicia, Tim McGraw and Faith Hill encouraged Christian to get in touch with his emotions and really connect to the lyrics.

Sa’Rayan was on #TeamMiley then came to Alicia as a steal. Alicia says she loves that Sa’Rayah is showing her daughter how many things are possible and she’s wowed the judges time and again. Josh Halverson is next and he got a four chair turn in the blinds.

Josh was stolen in the Battles by Miley but then Alicia was able to steal him back in the Knockouts and will take him to the Live Playoffs on her team. Alicia says she’s the team to beat this year.

A look at #TeamBlake

He says he decided this year to expand beyond country a lot more than usual. Alicia says his team is soulful and exciting and a lot of competition. Blake has Sundance Head, the big guy with the big bluesy voice. Bette loved Sundance.

Dana Harper is an R&B singer and daughter of a former NBA pro. She has an incredible voice that has wowed all of the coaches. Blake says he’s never heard a woman drop into the deep notes like Dana does and he’s thrilled to have her going into the Live Playoffs.

Jason Warrior has had a tough journey coming from Chicago. He started out on #TeamAlicia even though Blake wanted him. He was stolen in the battles by Adam Levine. Then Blake stole Jason in the Knockouts and says he sings with so much heart and passion.

Blake has a more eclectic team than past seasons

Austin Allsup is also on Team Blake. The family man and country singer knows Blake from way back. Alicia says he has effortless range and you really buy into it. He’s also got Courtney Harrell on Team Blake. Bette Midler gave her some great tips in the Battles.

Alicia says Courtney is exciting. Blake is happy she’s scaring all the other coaches and knows she might take them out. Blake says they have every genre and says Team Blake is the team to beat this year. We’ll see how it goes.

Blake says Miley gets more emotionally involved and attached with the artists than anything he’s seen. Miley is excited for the Live Playoffs. First she’s got Ali Caldwell on her team and she turned all the chairs in her Blind audition.

Darby Walker is a quirky high school student thrilled to be on Miley’s team. She turned three chairs in the blinds. Sophia Urista is a rocker and burlesque host who’s trying to change things up. Miley called her a rock and roll Dolly Parton.

Next on Miley’s team is Aaron Gibson even though Blake fought hard to try and get him in the Blinds. Miley says his voice is tatty and rough and she has so much confidence in him. Belle Jewel is last on Miley’s team and she’s a master at making newer songs sound old and funky. It’s transformative.

Belle started out on Team Alicia and then in the Knockouts got some interesting feedback from Tim and Faith. Tim called her fresh. She lost her Knockout and Miley was quick to steal her. Miley says she’s stoked to have her on her team because her of her fresh style.

Miley says she was looking for unique individuals on her team that are authentic and says she thinks all of her artists could win for different reasons. She’s confident heading into the Live Playoffs.

#TeamAdam is a force to be reckoned with

Alicia says he has a good variety of artists among his five. First is pop guy Billy Gilman who had a record deal when he was a tween then his voice change messed up his career. Adam says Billy is the best singer in the competition and no one can out-sing him.

Simone Gundy is a busy mom who put her music aside for family and is now ready to try again. Faith and Tim had notes to bring out her confidence and Adam says she’s one of the best female voices in the competition.

Brendan Fletcher tends bar to support himself while he sings every chance he gets. Adam told him in the Blinds his voice could be “the voice.” Miley told him he’s the kind of voice she’d like to listen to in her car. Adam is working on breaking Brendan out of his shy shell.

Adam is thrilled to bring a country guy to the Lives

Country singer Josh Gallagher started out on Team Blake but Adam was able to steal him to take to the Live Playoffs. Adam says he’s going to beat Blake over the head with Josh and is thrilled to have a country singer on his team. He calls him a dark horse for the finale.

High schooler Riley Elmore is also on Team Adam and the teen crooner is like someone from another time. Tim and Faith helped Adam bring him out of his shyness somewhat and work on his stage performance to add some maturity.

Adam says his entire team has the potential to go far and says he could definitely win it this year. Each team has some strong artists but there are a couple of standouts that seem destined for the finals.

Alicia says there’s a lot of camaraderie. Alicia says it’s long hours and we see Blake kissing Adam’s neck creeping him out. Blake sent Adam an emoji and he teased him. We see them goofing for the audience as Adam tires on Miley’s silly accessories.

We see Bette Midler goofing off and talking silly to the artists. Joan Jett fidgets with Miley and Sundance Head says he saw Faith Hill and missed two lines. Miley calls Blake big n tall. Adam says they find new and different ways to piss each other off.

Miley and Blake country dance back stage and Adam asks what the hell is happening. Monday night is night one of the Live Playoffs. Every artist will perform live this year and there are also live results in the same night as 20 will be whittled to 12.

Come back to CDL for every episode of The Voice all season long!