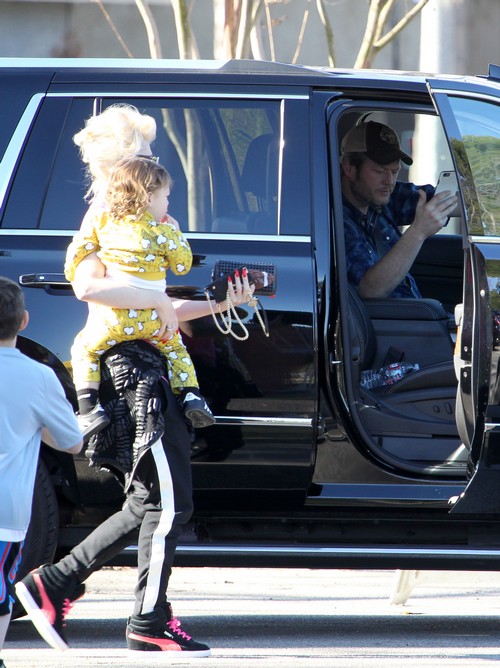 Gwen Stefani has broken Miranda Lambert’s heart with another mean-girl move using Blake Shelton. The Voice couple Blake Shelton and Gwen Stefani have been packing on the PDA on the NBC singing competition – and bombarding social media with their lovefests.

A recent series of SnapChat posts may have taken things a bit too far though, and are being dubbed inconsiderate by Gwen Stefani’s followers.

Blake Shelton’s ex-wife Miranda Lambert is heart-broken by Blake’s new insta-kids, escpecially after he refused to give her any babies.

It’s no secret that one of the things that Blake Shelton and Miranda Shelton couldn’t see eye to eye on were having children. Between their busy careers, alleged cheating scandals, and rumored drinking problems – Miranda and Blake didn’t seem to find any time for a pregnancy.

Various reports revealed after their divorce that Miranda was determined to still have a baby, and had a consultation at a fertility clinic.

Ironically, Blake inherited three new kids when he began dating Gwen Stefani right after their divorce. Gwen Stefani took to SnapChat and shared photos of herself, Blake, and her 2 year old son Apollo on a family outing.

Gwen and Blake took Apollo on a hike in Oklahoma, they all explored in the forest and then Blake bonded with the toddler on a rocky beach.

To be honest, Blake Shelton seems to be settling right in to his new role as a step-father. But, rumor has it that Miranda is devastated by the recent turn of events. You have to admit, it must be heartbreaking to see your ex-husband fathering someone else’s children, when you had planned to be having children of your own with him – and those plans fell through.

Of course, the fact that these videos emerged on Gwen’s SnapChat just a few days after dissing Miranda Lambert and calling her a “stupid girl” in her new song, is causing fans to see it as another diss.

What do you guys think? Did Gwen post these videos just to rub it in Miranda’s face that Blake is playing daddy to her kids? Share your thoughts in the comments below and return to CDL for all your Voice news, recaps and songs!