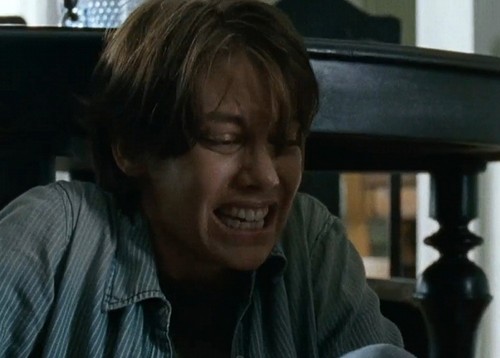 “The Walking Dead” spoilers for the 90 minute Season 6 finale on Sunday April 3 reveal that Maggie Greene (Lauren Cohan) is experiencing major pregnancy complications in a post-apocalyptic word where prenatal care is practically non-existent. What will happen?

On TWD Episode 15 Season 6 Maggie collapsed screaming in pain at her house just after Enid (Katelyn Nacon) cut her hair. It seemed like an over-reaction to the extreme haircut for a moment, but nope, it’s full on baby problems. When Maggie went down screaming, TWD fans had to wonder what’s up.

Not to get too crazy, but is Maggie cooking a little baby walker in her oven? Since we know everyone in the new world carries the virus that turns them when they die, does it also impact when life is created? Maggie and hubby Glenn Rhee (Steven Yeun) both had the virus when they made that baby.

So… is Maggie’s baby some sort of prenatal horror show going in inside her? Is that baby killing her? What we do know is that at the start of the finale episode, a whole bunch of Alexandrians load Maggie up into the RV to take her to see the Hilltop doc that knows about babies.

Plus, he’s got an ultrasound machine so they can check and see if she’s gestating Rosemary’s Baby. Too bad the Saviors prove to be major obstacles to her getting to the baby doc. First, the gang has a run in with a group of Saviors that forces them to go another way.

Then they have a run in with a whole chain of walkers, one festooned with some locks of Michonne’s (Dania Gurira) hair and another in Daryl Dixon’s (Norman Reedus) vest. Don’t ask us how they got the walker to sit still while they put a vest on him, but still…

What we don’t know yet is how long it will take Rick Grimes (Andrew Lincoln) and the gang to figure out that the Saviors also have Glenn and Rosita Esposito (Christian Serratos). Looks like the Saviors will derail every attempt that the gang makes to get to Hilltop and Maggie won’t see the doc in time.

When we finally meet Negan (Jeffrey Dean Morgan) with less than 15 minutes left in the finale, TWD spoilers indicate he will threaten her with Lucille, only to take her out of her misery which is growing. Glenn of course, will threaten back. Will Negan take out Glenn as he does in the graphic novels?

And here’s some questions we have about that baby. Even if the baby was a-okay before – and it seemed to be at her first Hilltop checkup, what happens if Maggie loses the baby? If it dies, will it turn into a walker inside her belly?

We know everyone who dies turns. Could that happen to Maggie? It’s a really horrible notion, but we’ve seen a lot of horrible things in TWD over the past six seasons. There also some fan theories floating that Maggie may have decided to chemically abort the child.

She just had Enid cut off her hair because she said she didn’t want it in her way and needed to move forward. Even before the first pain hit her, this seemed to be an oxymoron. The hair in her way is not that big a deal – a giant baby bump is another thing.

We all saw what happened to the last woman that gave birth in the apocalypse – Lori Grimes (Sarah Callies) – it did not work out well for her post-partum. Granted baby Judith survived, but that’s been a close call many times.

What do you think fans of “The Walking Dead”? Is Maggie miscarrying (intentionally or not) and will the baby turn into something deadly inside her? Can they make it to Hilltop before they lose both Maggie and the baby?

Stay tuned to CDL for more Season 6 “The Walking Dead” finale spoilers and be sure to check back here for a live recap of the 90 minute finale on Sunday April 3.