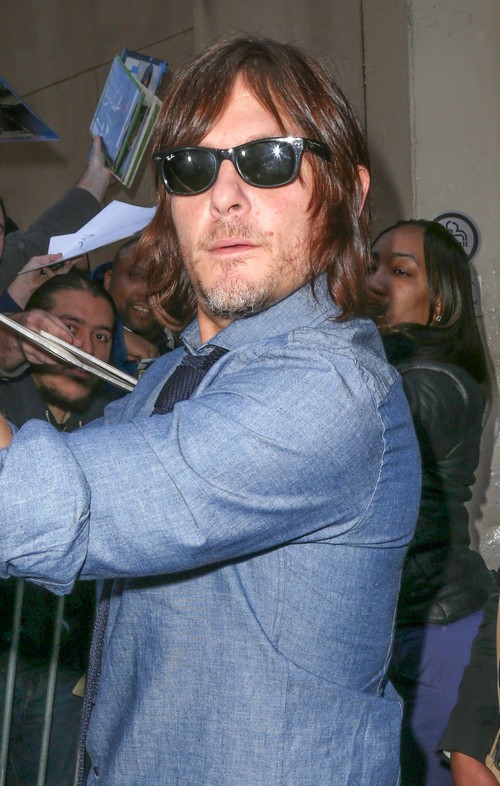 We never thought Daryl was a possibility for many reasons. First, he’s not at a place in his character arc where killing him makes sense. Abraham Ford (Michael Cudlitz) and Glenn Rhee (Steven Yeun), by comparison, are prime for culling.

Melissa McBride recently sat down with Greg Braxton for a video interview for the LA Times and he asked her about the undeniable chemistry between Carol and Daryl. He mentioned that many fans are obsessed with the pairing and she agreed it is a focal point.

McBride said, “There’s no denying that there’s chemistry there. I love Norman.” She added that “the writers haven’t given this to us” on whether a romance could blossom there. She discussed the relationship in present tense as if it still exists.

That’s clue number one that Daryl survives Negan’s bat-rage. But then McBride got more specific and gave us a great “The Walking Dead” Season 7 spoiler in the LA Times video posted on Friday, April 15, 2016 – dates are important when it comes to TWD spoilers!

After discussing the potential for a relationship between Daryl and Carol, McBride talked about how Daryl and Carol will embark on parallel journeys and said, “It’s going to be interesting in Season 7 to see how these characters alone deal with the situations they’re in.”

That confirms it TWD fans – Daryl lives! As for Carol, we know she and Morgan (Lenny James) were scooped up by The Kingdom and will spend time with King Ezekiel and his crew as Season 7 kicks off. Anyone else hoping that Ezekiel has a tiger like in the comics? We’ll see…

When you run down the line of the 11 possible victims for Negan to murder via Lucille, we’ve got Sasha, Rosita, Maggie, Michonne and Carl that are absolutely not going to die since Negan doesn’t do women and kids. That knocks it to six possibilities.

Aaron they can’t kill because bashing a gay dude with a bat would create well-deserved fan backlash as a homophobic action. That narrows it to five. Rick’s off the table because he’s the leader plus Negan threatened to feed him Carl’s eyeballs if people didn’t behave during the beating.

What do you think TWD fans? Are you happy that Melissa McBride confirmed no bat death for Daryl? Looks like fans of Daryl and shippers of Carol and Daryl can quell the urge to riot for now. But it is the apocalypse and everyone’s ticket has a sell-by date on it, so death could still come calling for Daryl.

Share your comments below on the reveal of Daryl’s survival and what you think is coming next for the scruffy hero. Can he get his vest back from the Red Rover walker last seen wearing it? Will Dwight (Austin Emilio) keep his crossbow?