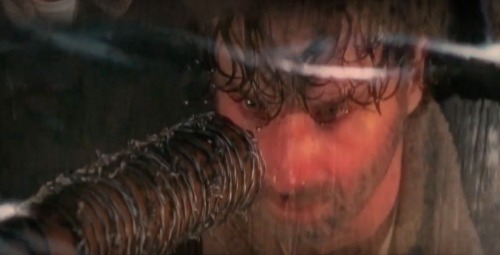 ‘The Walking Dead’ spoilers were revealed at Comic Con 2016 in San Diego when the official trailer for season 7 was released. ‘TWD’ fans were introduced to Ezekiel [Khary Payton], a former zookeeper who insists upon being called King Ezekiel, and has a pet tiger named Shiva.

‘TWD’ fans looking for answers as to which of the 11 major characters survived Negan’s deadly attack with his beloved barbed wire covered bat Lucille you won’t find any clues in the official ‘TWD’ trailer for season 7. The preview keeps the mystery of who Negan murdered by highlighting each of the 11 characters who may have met a deadly fate at the end of season 6.

But rest assured, the identity of Negan’s victim will be revealed in the first episode as executive producer Greg Nicotero revealed recently.

Jeffrey Dean Morgan [Negan] and Andrew Lincoln [Nick] were part of ‘The Walking Dead’ panel at Comic-Con in San Diego on Friday, July 22. When asked what ‘TWD’ spoilers he could share, Andrew replied ‘It’s a really s**** start to the season. It’s all leading up to one of the greatest showdowns we’ve had on this show since Terminus.”

The cast and producers were tight-lipped during the show’s panel at Comic-Con about which character has died. ‘The Walking Dead’ spoilers tease that there are new characters and new locations to be revealed.

Frustrating as it is, fans will get answers to their burning questions when season 7 of ‘The Walking Dead’ returns Sunday, October 23 at 9 p.m. on AMC. Executive producer Robert Kirkman wants fans to hang in there – he promises the resolution in season 7 will “absolutely be worth the wait.”