‘The Young and the Restless’ Spoilers: Adam Alive, Not Dead – Escaped Genoa City After Explosion 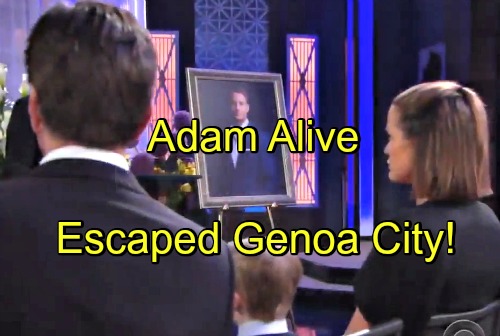 The Young and the Restless spoilers explain how Adam could be alive right now although Genoa City is currently grieving his death and crying at the memorial service. We don’t expect a newly recast Adam Newman to walk into his own memorial but the opportunity for his next incarnation to return to GC has been established.

The Young and the Restless (Y&R) spoilers fans watched Nick (Joshua Morrow) attempt to help Chelsea (Melissa Claire Egan) escape with her son. Paul (Doug Davidson) and Dylan (Steve Burton) watched a small plane leave an air strip on the outskirts of Genoa City, thinking that Adam (Justin Hartley) and his family were aboard. Viewers know that Chelsea and Connor (Gunner and Ryder Gadbois) were taken back to the penthouse. Those points and others make it plausible that Adam was flown out of town.

Nick was shocked when he watched the cabin blow up. Nick also seemed genuinely outraged when he later confronted his father at the Newman Ranch and told him that Adam was dead. So, it’s possible that Adam involved his brother in an elaborate escape scenario. But, that seems highly unlikely considering all circumstances involved. Nick almost certainly didn’t help Adam to covertly board the plane in question.

Chloe (Elizabeth Hendrickson) certainly didn’t help Adam. She’s the one who shot him with a dart gun at the cabin, as The Young and the Restless spoilers detailed. Whether she was responsible at all for the cabin blowing up is anyone’s guess. But, the GPS tracker she planted in Connor’s plush blue toy dinosaur conveniently fell out of Nick’s SUV to enable a plot foreshadowing.

So, Chloe’s plan to track her best friend and the little boy who has Delia’s (Sophie Pollono) donated corneas was thwarted by Nick’s rushed attempts at getting Chelsea and his nephew out of town.

The Young and the Restless spoilers have often documented Victor’s (Eric Braeden) steely demeanor. But, he was deeply distressed about Adam’s safety while waiting for word at the Ranch with Nikki (Melody Thomas Scott). Then, after Nick arrived, Victor was stunned to hear that Adam was apparently dead.

Victor did not have Adam killed. With however, or whenever, the cabin exploded, it’s possible that one of Victor’s security staff rescued Adam and got him to the air strip in time for takeoff. But, it seems more likely that Victor wasn’t involved with Adam since the two last spoke at the cabin a few days prior to his alleged death.

The latest open-ended Adam arc that Y&R has created enabled Justin Hartley to make a gracious exit from The Young and the Restless to focus on Season 1 of NBC’s prime time dramedy This Is Us. Now TPTB can decide, if they haven’t already whether Adam will be recast and return to Genoa City or simply left as dead.

Whether it was necessary to write Adam into another explosion-based mystery is a debatable point. Fans might be split about the show’s strategic choice. But, it would be best for all involved to suggest future resolutions, rather than rehash the past indefinitely as the fall and possibly, winter, roll on.