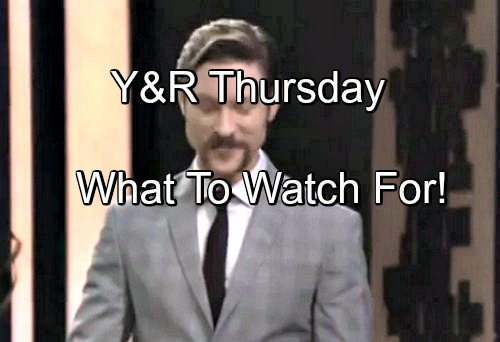 The Young and the Restless (Y&R) spoilers for Thursday, August 25, tease that Noah (Robert Adamson) will try to halt Summer’s (Hunter King) plans. Noah probably thought Summer would wise up and dump Luca (Miles Gaston Villanueva) eventually. The wedding is still on, but Summer won’t be tying the knot if Noah has anything to say about it.

Phyllis (Gina Tognoni) will hold up a bridal gown as Sharon (Sharon Case) stands nearby. Noah will strut over and urge Phyllis to put that dress down. He’ll scoff at the idea of Summer marrying “that jerk.” Noah will suggest that it’s not happening.

Phyllis might reply that already she’s voiced her support for Summer. They can’t make Summer’s decisions for her. It’s Summer’s life and she’s free to follow her heart. Noah will contend that this isn’t about preventing a mistake. It’s about protecting Summer from a man who’s deceitful and dangerous.

Noah may argue that they’ll never forgive themselves if they let Summer do this and she ends up getting hurt. Of course, Phyllis agrees with Noah’s disapproval and she’s undoubtedly still hoping the wedding can be stopped. Summer just needs to believe that Phyllis has made peace with the situation. That way Summer won’t hate Phyllis’ guts when everything blows up.

The Young and the Restless spoilers reveal that Luca and Summer will have a small engagement party. A special guest will drop by to celebrate their upcoming nuptials. When Daniel (Michael Graziadei) walks in, Summer will cry out with joy. She’ll be stunned and elated by her brother’s return to Genoa City.

Since Daniel is appearing out of the blue, someone must’ve given him updates on the terrible choice Summer is about to make. Phyllis or Noah may have contacted Daniel as part of a sneaky strategy. Daniel will play it cool and indicate that he’s thrilled for Summer. He’ll claim he’s happy if his sis is happy.

In reality, Daniel could intend on showing Summer that her husband-to-be is a creep. Unfortunately, it looks like all of these secret missions are going to cause trouble. Y&R viewers can expect some tense moments. By the end of the week, Summer will have to decide who she’s willing to trust.

Will Summer have faith in shady Luca or her scheming family? Neither option is ideal, but at least Summer’s relatives are hoping to save her from a risky future. Summer deserves a husband who will be honest, not one who lies every chance he gets.

As things go downhill at the party, Adam (Justin Hartley) will prepare to receive his punishment. Chelsea (Melissa Claire Egan) will pray for mercy for her husband. She’ll feel like Adam can never catch a break. Since Adam pled guilty, all Chelsea can do is hope that the judge will give him a light sentence.

However, the guard has been fading fast. If he dies, Adam’s charges could be bumped up to murder. Adam could be facing a long stint in the slammer. Victor (Eric Braeden) will soon make a daring move to help his son, but will it really help? Stick with the CBS soap to see if good news or bad news is on the way.