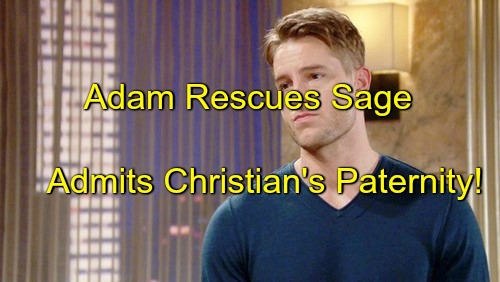 “The Young and The Restless” (Y&R) spoilers reveal that the Dr Anderson (Elizabeth Bogush) debacle will ultimately affect three marriages and could tear all of them apart. In coming days, Adam Newman (Justin Hartley) will rescue Sage Newman (Kelly Sullivan) and that’s when things will explode.

Nick Newman (Joshua Morrow) does not understand Adam’s outrage at Sage being sent to Fairview. Even though he knows Sage was besties with his brother, the level of emotion Adam is putting out makes no sense to either Nick or Chelsea Newman (Melissa Claire Egan).

But Adam can’t help it. Not only is Sage a close friend, but he knows that she’s the mother of his child. Adam has a lot of emotions bottled up over this situation. He’s grieving Christian, but has no outlet since no one but Victor Newman (Eric Braeden) knows he’s lost a child.

And, of course, Victor isn’t sympathetic, he’s simply using the paternity fact to keep control over Adam. So Adam is grieving and now he thinks that the mother of his dead child is being neglected and kept against her will at Fairview – and he assumes her issues are tied to the death of their son.

Adam is dealing with guilt that he wasn’t there for Sage when she was grieving and that he can’t publicly grieve with her. All this will culminate in him rescuing Sage from Fairview. Even though Sage went in willingly – and, in fact, faked her way into the sanitarium – she will soon know that was a mistake.

Nick makes a big misstep when he confides in Sharon Newman (Sharon Case) that Sage went in to get dirt on Dr Anderson. Sharon is off the rails because of Dr A tampering with her medication and wrongly sees the shrink as a heroine.

Sharon will reveal Nick and Sage’s plot to Dr Anderson who will then step up her efforts to torment Sage. Adam will get to Sage at Fairview just in time before things get potentially dangerous for her. As part of the rescue effort, Christian’s paternity will be revealed.

This will shock both Chelsea and Nick who will be outraged that Adam kept the secret from them. Adam let Nick mourn a child that was not his and, for Chelsea, this is yet another dirty secret Adam hid from her – after she’s forgiven so much. This could wreck both these marriages plus Sharon’s.

While Adam is right to rescue Sage, the fallout will be spectacularly bad. Even if Dr Anderson’s plan doesn’t go exactly the way she wants, thanks to Adam’s interference, the outcome will still be catastrophic for Nick and those he loves.

What do you think Y&R fans? Do you think the paternity reveal of Adam as Christian’s dad will rip these marriages apart? Do you think Sage will be upset that Nick didn’t rescue her and will turn to Adam after he saves her?