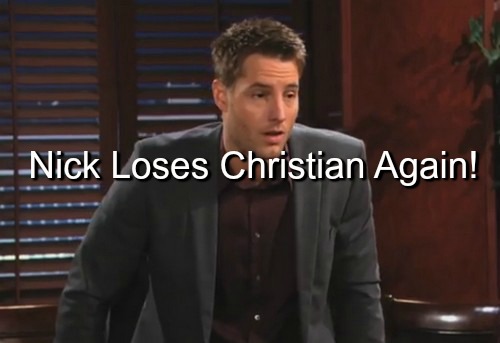 “The Young and the Restless” (Y&R) spoilers indicate that Nick Newman (Joshua Morrow) thinks he’s doing the right thing by helping Dylan McAvoy (Steve Burton) investigate the murder of Dr Anderson (Elizabeth Bogush), but he’s setting himself up for heartbreak as the truth about Christian’s paternity is revealed.

All of this will unfold as Nick and Dylan dig into this mess – first they will discover that Sully is not Sharon Newman’s (Sharon Case) baby and that she was never pregnant. Then they will discover from the ramblings of crazy Patty Williams (Stacy Haiduk), or other sources, that Christian is not dead.

Then they will finally confront the ugly truth that Sully is baby Christian and was stolen from Sage Newman (Kelly Sullivan) and given to Sharon. When Sully has to be taken from Sharon and given back to Sage, it will devastate Sharon, but is the proper thing to do.

But sadly, the tragedy won’t end there. As a result of all the digging, the next big even that comes to light is that Adam Newman (Justin Hartley) is the biological father of Christian – and not Nick. This will result in Nick grieving the loss of Christian all over again.

Joshua Morrow told Michael Fairman of On-Air On-Soaps, “Later on, Nick is going to lose Christian. These are looming stories I can’t wait to tell, but they don’t need to rush them by any means.”

Judging from this, we may not see Christian back with Sage and Nick until May sweeps – it could be a slow burn story that carries on for weeks and months to come. Nick’s joy at having Christian back in their lives will be short-lived once the paternity is revealed and Adam is exposed as the father.

When Nick realizes that Christian is not his son, it will crush him. Nick has lost children before to death, but this is a whole different kind of loss because Christian will still be present, yet no longer Nick’s child. And of all the people to be the dad, Adam is one of the worst outcomes for Nick.

Adam has replaced Nick at Newman Enterprises and with Victor Newman (Eric Braeden) and now Adam will have replaced Nick as Christian’s dad. How much of this can Nick take before he snaps? And what will happen when he does?

Share your comments below on what you think Nick will do once he finds out he’s not Christian’s biological father. Be sure to check back with CDL often for more “The Young and The Restless” spoilers and news.