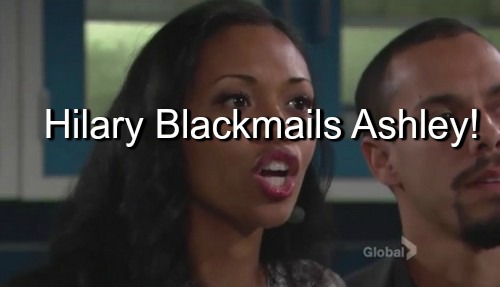 “The Young and the Restless” spoilers (Y&R) reveal that in Thursday’s episode Ashley (Eileen Davidson) and Hilary (Mishael Morgan) will be at odds over Dr. Neville’s (Michael E. Knight) project. Now that Hilary has her life back on track, she’s content to do whatever she wants. It’s her way or the highway.

As Hilary becomes more involved in marketing their brand, The Young and the Restless spoilers for the March 3 episode say she’ll suggest that Dr. Neville needs a makeover. Hilary will think the drab doc needs to look a bit more presentable for a photo shoot she has planned.

Ashley will contend that the whole idea is ridiculous and Devon (Bryton James) will agree that it seems unnecessary. They’ll make Hilary feel like her opinions are being ignored.

As the argument heats up, Hilary will take some jabs at Ashley’s personal life. “The Young and the Restless” spoilers say Ashley will insist that Hilary is overstepping her boundaries. Devon will get everyone to their corners and they’ll put the issue to rest for the time being. However, a new problem will quickly emerge.

Y&R spoilers indicate that Ashley will nearly faint from the intense exchange. Dr. Neville will shuffle Ashley off to help her recuperate. Later, Hilary will stop by Ashley’s office and spot her medications. Since Hilary has been one of Dr. Neville’s test subjects, she’ll likely realize that Ashley is being treated by him as well. Of course, Ashley desperately wants to keep her illness under wraps.

Since Hilary’s scheming side has recently returned, there’s a good chance she could blackmail Ashley with this info. If Ashley doesn’t get on board with Hilary’s goals, everyone could get updates on her secret. Even if Ashley plays by Hilary’s rules, there are no guarantees. You can bet that Hilary will want everyone to know if Dr. Neville’s protocol has been successful on another patient.

It’s possible that this revelation could help Ashley and Hilary find some common ground. Nevertheless, that probably wouldn’t stop Hilary from making a profitable move. In the meantime, Ashley will try to do damage control. Stick with “The Young and the Restless” to see when the news will finally spread.

So Y&R fans, what do you think about Hilary’s discovery? Will Hilary try to spin this situation in her favor? How far will Hilary go to get what she wants? Voice your opinion in the comments below and don’t forget to check CDL often for the latest “Young and the Restless” spoilers, updates and news.